Additional workup included electrocardiography, which showed ST-segment elevation in the anterolateral lead, and chest radiography, the findings of which were unremarkable. The troponin level (0.01 ng/mL) and creatine kinase level (107 U/L) were normal.

Computed tomography (CT) scan of the abdomen and pelvis showed pericolonic inflammatory fat stranding and an unremarkable liver. Ultrasonography of the abdomen showed splenomegaly and a septate hepatic cyst with no evidence of gallstones.

Hospital course. On hospital day 2, his blood culture grew methicillin-susceptible Staphylococcus aureus (MSSA), and his CRP level had risen to 133.3 mg/L. Blood cultures were repeated, and he was empirically treated with intravenous (IV) oxacillin. He developed prominent conjunctival injection, diffuse erythroderma, and exquisite point tenderness of the left upper chest at the costochondral junction, near the left first and second rib. Upon further questioning, he reported having recently been treated for impetigo of the right lower extremity after a basketball teammate had had a methicillin-resistant S aureus infection.

On hospital day 3, left shoulder radiography and a bone scan showed no radiographic evidence of osteomyelitis. The CRP level remained elevated at 129.7 mg/L, and IV clindamycin was added to his antibiotic regimen. 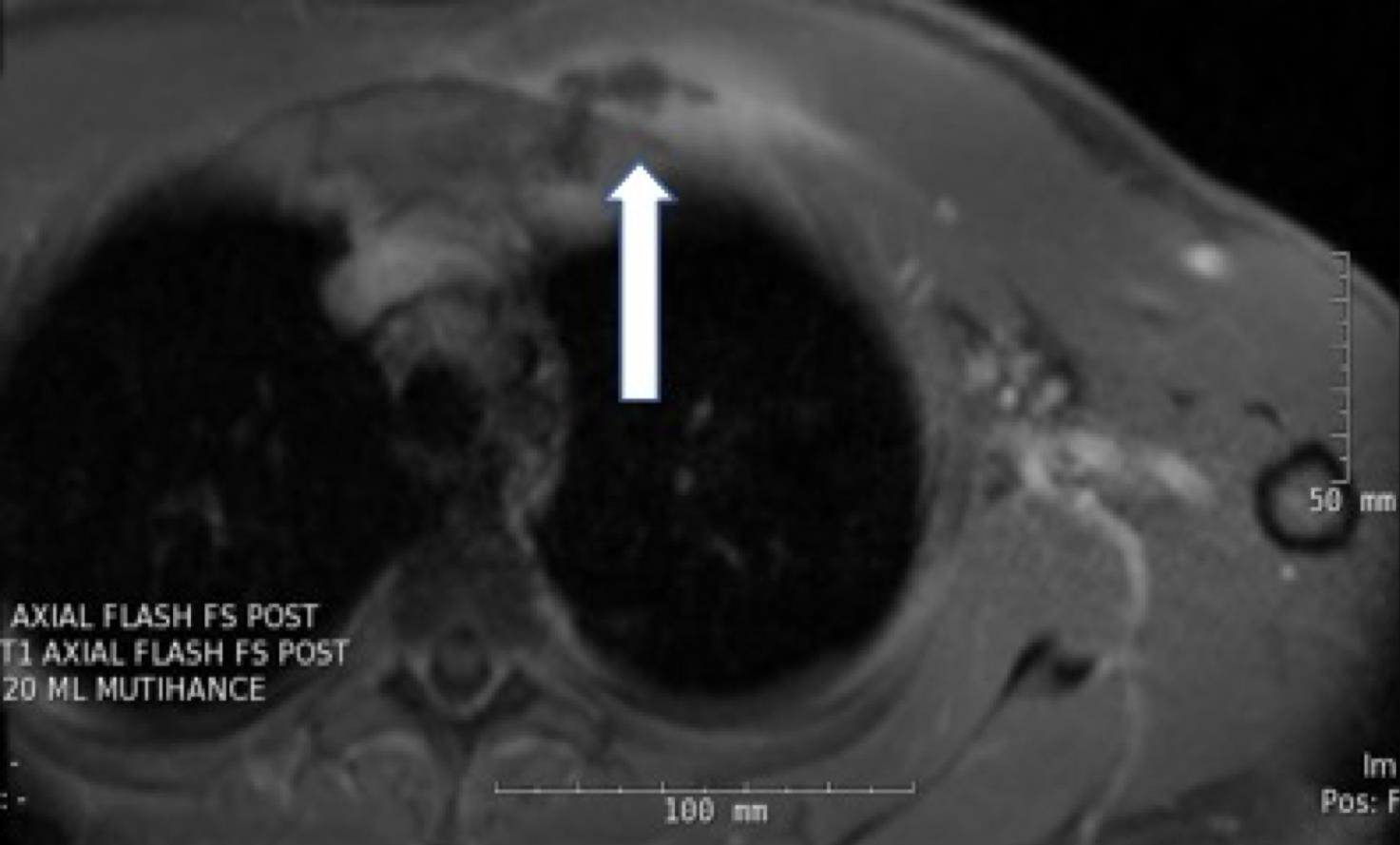 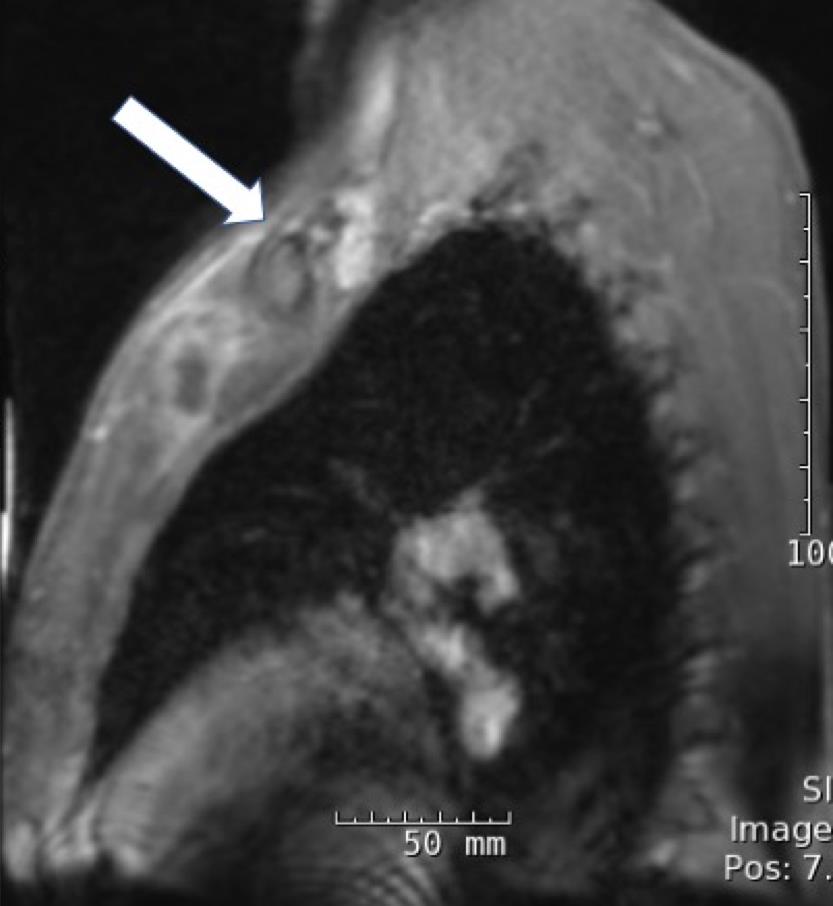 He remained on IV oxacillin and clindamycin with notable improvement, and on hospital day 7, he underwent CT-guided aspiration of the chest wall abscess, which yielded 8 mL of purulent fluid. The abscess had many WBCs on Gram stain, but no organisms were identified, and eventually the abscess culture yielded light growth of MSSA. Approximately 1 week after admission, he developed mild desquamation of his face with diffuse erythroderma on his legs and 2+ pitting edema.

On hospital day 10, he had prominent desquamation of his face, axillae, and bilateral palms (Figures 3 and 4). The CRP level had decreased significantly to 9.3 mg/L. He was transitioned from IV to oral clindamycin, and oxacillin was discontinued. He received a diagnosis of staphylococcal toxic shock syndrome (STSS) and was discharged with oral clindamycin and rifampin. 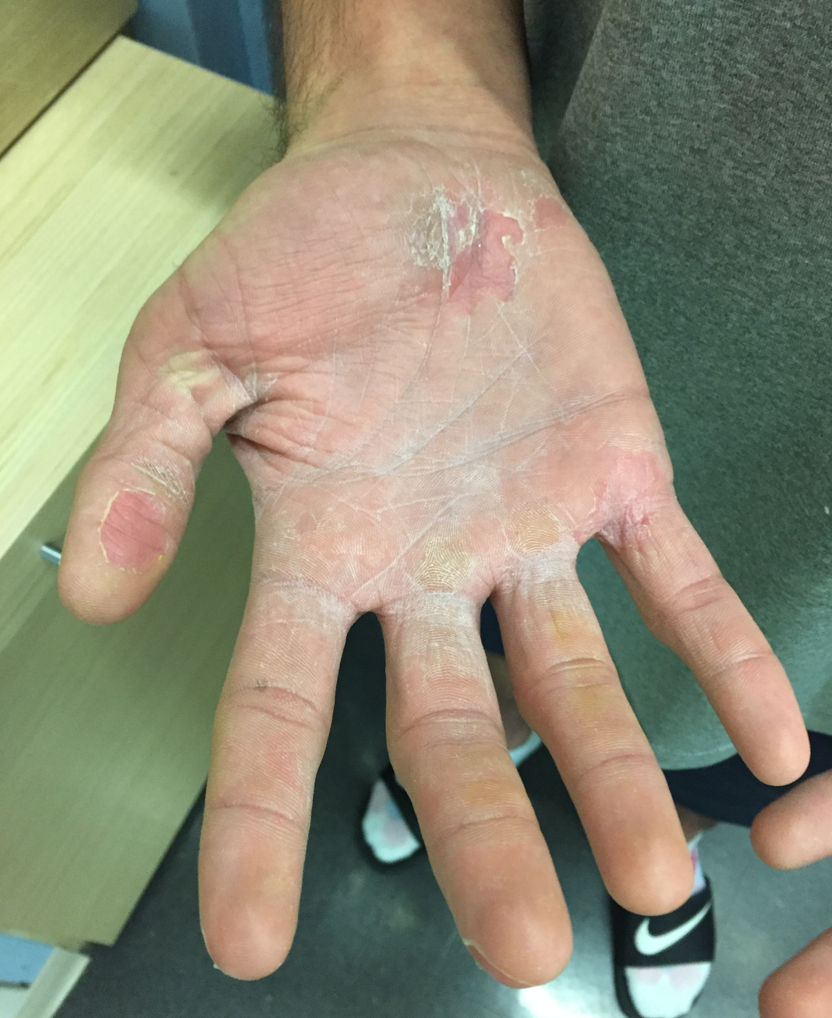 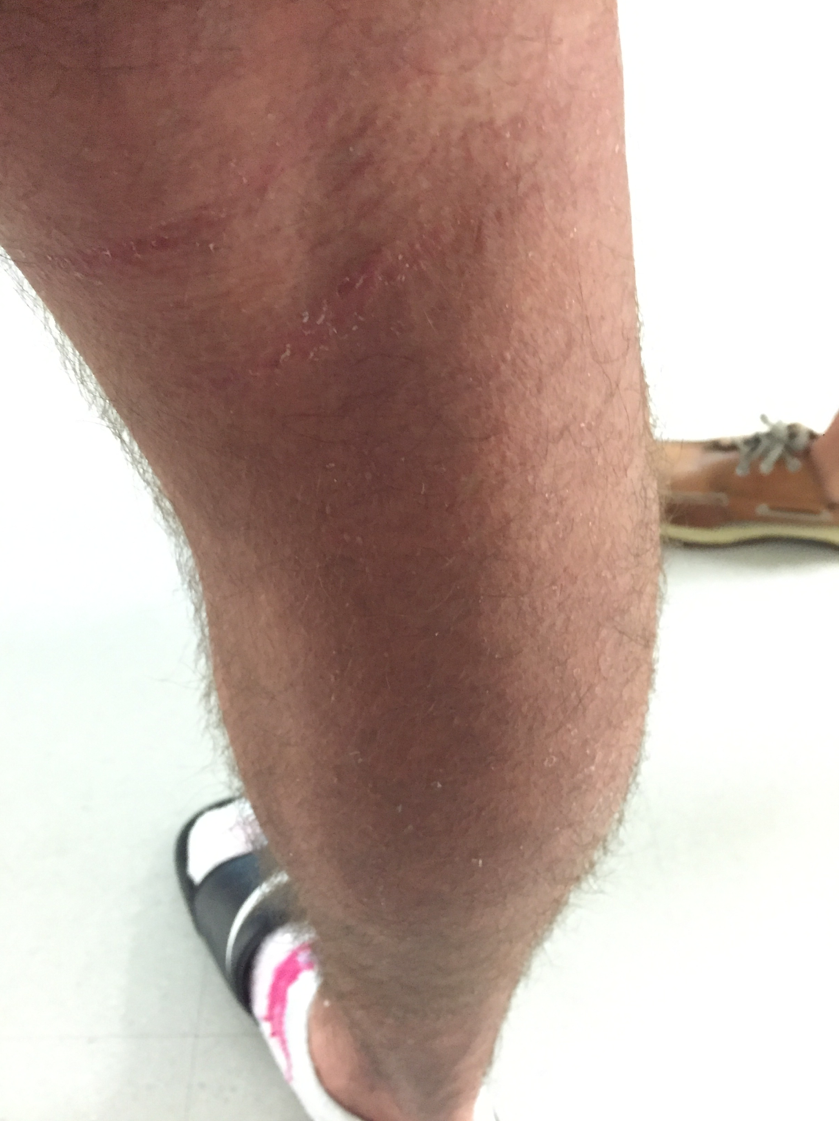 Figures 3 and 4. Desquamation of the patient’s palms and legs.

Outcome of the case. He completed 3 months of clindamycin and rifampin with near complete resolution of the left costochondritis as evident on serial MRI scans. He responded well to therapy and was followed closely as an outpatient by an infectious disease specialist.

Although costochondritis frequently occurs in athletes as a self-limiting condition,1 septic costochondritis in an athletic pediatric patient is rare. There has yet to be a reported pediatric case of STSS due to MSSA septic costochondritis at the first sternochondral junction. Primary infection of the costochondral junction is uncommon and occurs mainly among IV drug users or patients after sternotomy, with Candida albicans being the most common organism isolated in IV drug users.2 The costochondral joint is a fibrocartilaginous synchondrosis joint with very limited movement and blood supply, thus making it difficult for bacterial growth to occur there.1 Sakran and Bisharat have reported 3 of the 8 cases of S aureus chest-wall abscess from costochondritis; however, all were in neonates or adults, and none occurred in previously healthy pediatric patients.2

Most anterior chest wall abscess reported in the literature are of the sternoclavicular joint. Common risk factors include intravenous drug use, distant site of infection, diabetes, trauma, and infected central venous line.3 Approximately 23% of reported patients with sternoclavicular arthritis had no risk factors.3 The most common pathogen isolated in sternoclavicular septic arthritis is S aureus, with less common pathogens such as Pseudomonas species and Escherichia coli also having been reported.3 While most septic arthritis cases occur in older patients, sternoclavicular septic arthritis is more common in younger patients.3 Ross and Shamsuddin hypothesized that younger patients are more susceptible because they are prone to injuries that allow bacteremic seeding, and that elderly patients have more-sclerosed cartilaginous joints, leading to an undesirable environment for bacteria growth.3

The clinical findings for STSS as delineated by the Centers for Disease Control and Prevention4 are as follows: temperature of 38.9°C or higher, hypotension, diffuse erythroderma, desquamation (1-2 weeks after rash onset), and multisystem involvement (at least 3 organ systems). Although this patient did not have all of the clinical findings of STSS, strong clinical and serologic evidence supported the suspicion that he had STSS. He required aggressive fluid resuscitation to treat hypotension. Additionally, his recent history of impetigo, the development of anterior chest wall abscess with MSSA-positive bacteremia, diffuse erythroderma, diffuse myalgia, fatigue, gastrointestinal tract discomfort, skin desquamation, and various serologic abnormalities were highly suspicious for toxin-mediated effects of S aureus.

STSS was first described in a series of pediatric cases in 1978.5 Since then, most reported cases have been menses-related in white women. However, nonmenstrual TSS also has been reported, such as surgical and postpartum wound infections, osteomyelitis, arthritis, and cutaneous or subcutaneous lesions. Although athletes have a higher colonization rate for S aureus than the general population, there are usually no predisposing risk factors for septic costochondritis in an otherwise healthy athlete.

Septic costochondritis generally presents with insidious onset of chest pain localized to the infected costochondral joints.1 Patients usually present in a subacute fashion, with fever and leukocytosis being the common presenting features.1,3 In a pediatric patient with fever, chest pain and a history of sports injury, septic costochondritis should be suspected despite the absence of osteomyelitic lesions on plain radiographs. CT or MRI could be helpful in establishing a diagnosis.1

Most of the sternoclavicular cases that Ross and Shamsuddin reported ultimately had extensive bony destruction, retrosternal abscess, and mediastinitis requiring en bloc resection of the sternoclavicular joint with debridement of bone and soft tissues until patients were healthy.3 S aureus is an organism that causes severe joint destruction, with various virulence factors attributing to its arthritogenicity, such as its surface protein that binds to fibrinogen, the release of formylated peptides, and production of molecules with superantigenic properties.6 In vivo, it has been shown that the superantigenic properties of S aureus stimulate T cell proliferation and subsequent massive secretion of cytokines and chemokines, leading to rapidly progressive joint destruction through the activation of metalloproteinases and rapid systemic bone resorption.6 Thus, in patients with significant joint involvement, frequent imaging should be pursued to monitor for resolution of symptoms.

STSS due to anterior chest wall abscess at the first costochondral joint is extremely rare in an otherwise healthy athletic teenager with no predisposing factors. STSS causes life-threatening complications such as coagulation defects, cardiac arrhythmias, and irreversible respiratory failure. Septic joint infections by S aureus can cause significant joint destruction, and early recognition may be difficult given the diffuse systemic symptoms manifested by STSS.

Although it is rare, STSS due to septic costochondritis should be considered in young athletic teenagers who present in shock associated with a multitude of symptoms and with point tenderness at the costochondral joint. More importantly, STSS must be differentiated from other conditions such Tietze syndrome, costochondritis, and sternocostoclavicular hyperostosis syndrome.1 Thus, increased vigilance for STSS, prompt abscess drainage, and rapid initiation of appropriate antimicrobial therapies are necessary for survival.