A 21-month-old boy with a history of 32-week prematurity presented to the emergency department (ED) with a first-time seizure following 1 day of nonbilious, nonbloody emesis and 1 episode of nonbloody diarrhea.

A review of systems in the ED was otherwise negative. His maximum axillary temperature at home prior to presentation had been 37.6°C. He had developed a generalized tonic-clonic seizure, prompting his parents to bring him to the ED, where he was given 2 rescue doses of lorazepam. The seizure lasted 15 minutes, and his maximum temperature in the ED was 38.3°C.

He subsequently developed an erythematous, macular, confluent rash over his trunk and extremities (Figure 1), as well as conjunctivitis and rhinorrhea (Figure 2). He was given diphenhydramine and intravenous corticosteroids due to concern for anaphylaxis, and he was transferred to a children’s hospital for further observation. 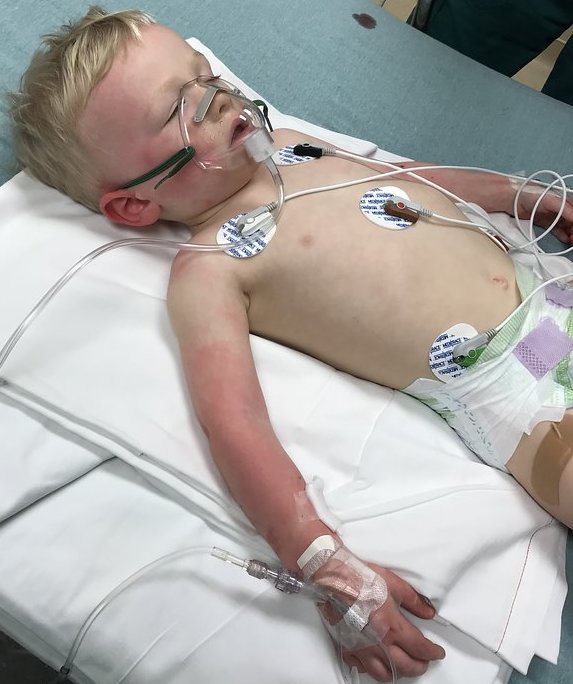 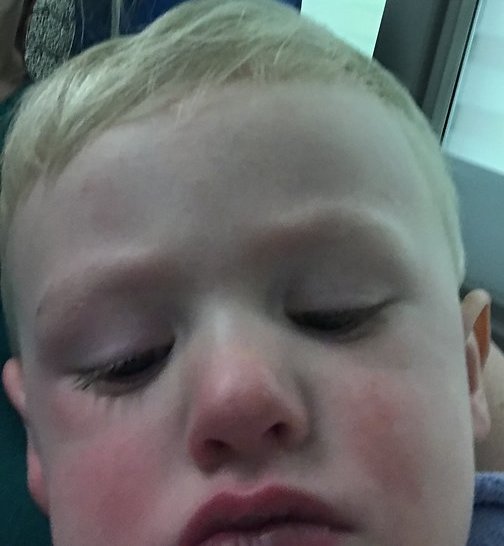 Vital signs at presentation to the children’s hospital were as follows: temperature, 36.7°C (axillary), heart rate, 154 beats/min; respiratory rate, 20 breaths/min; and blood pressure, 104/73 mm Hg. He was fatigued but appeared nontoxic. He had injected conjunctivae and bright red lips and oral mucosa. He was tachycardic but had a regular rhythm with no murmurs, and his lungs were clear to auscultation bilaterally. He had several small red macules over his upper extremities, with petechiae present on his left arm at the former tourniquet site (Figure 1).

Once admitted, the patient’s rash and conjunctivitis improved. He had an unsteady gait, which continued for 24 hours after the initial seizure, and he developed profuse green, watery diarrhea. The differential diagnosis included adenovirus infection, incomplete Kawasaki disease, salmonellosis, shigellosis, or other viral infection leading to febrile seizure, such as human herpesvirus 6, enterovirus, influenza, and rhinovirus.1 Results of a respiratory viral panel were negative. Stool PCR results were positive for Campylobacter and astrovirus. Given the severity of his symptoms, he was treated with 3 days of intravenous azithromycin. Upon further questioning, the patient denied any known sick contacts or dietary exposure, although he did attend daycare and had been to a petting zoo several days prior to presentation.

The patient was discharged after a 3-day hospital stay with complete resolution of his presenting symptoms. An electroencephalogram done 1 month after discharge to rule out underlying seizure disorder was normal. Six months following the event, he had no recurrent symptoms or late-onset postinfectious complications such as reactive arthritis or Guillain-Barré syndrome.

Outbreaks of Campylobacter infection are rare and usually sporadic but are frequently seen in young children. Transmission occurs mainly through person-to-person spread, particularly during the acute phase of illness, although transmission also frequently occurs with exposure to farm animals, pets, or meat sources.4

Campylobacter infection has been associated with generalized tonic-clonic seizures, although specific accounts of these cases are rare. In a study of a large outbreak of 2500 children with C jejuni enteritis following consumption of contaminated milk in England, 324 school-aged children were found to be affected, 9 of whom experienced seizure.12 In these patients, seizure and fever preceded bloody diarrhea.12 The average age of these children was 5 years 8 months, which is older than the age range normally associated with febrile seizure.13 In another case report, a 5-year-old patient with no personal or family history of seizure had a focal seizure 3 hours following the onset of nausea and vomiting, followed by a second generalized seizure 1 hour later.14 This patient was afebrile at the time of seizure and developed bloody diarrhea the following day. In one review, central nervous system (CNS) manifestations including meningoencephalitis and stroke accounted for up to 12% of the extraintestinal manifestations of Campylobacter infection.15

Rashes, including urticaria, erythema multiforme, purpura, erythema nodosum, and vasculitis, have been reported with Campylobacter enteritis.16-19 This patient’s rash was nonspecific and did not clearly fit any of the rash patterns associated with these conditions. While this patient’s rash, conjunctivitis, rhinorrhea, and lip swelling could have been a manifestation of the immunogenic features of Campylobacter infection, is unclear whether the initial treatment of a suspected allergic reaction or the resolution of infection caused the rash to resolve.

Macrolides are the cornerstone of therapy for severe Campylobacter infections, including those with CNS manifestations.20 Resistance of Campylobacter species to fluoroquinolones is common; up to 36% of C coli and 25% of C jejuni isolates in the United States were found to be resistant to ciprofloxacin as of 2014.21 While resistance to macrolides such as azithromycin has been increasing in C jejuni isolates, it remains lower than that of fluoroquinolones (2% of C jejuni and 10% of C coli were resistant to azithromycin as of 2014).4,21