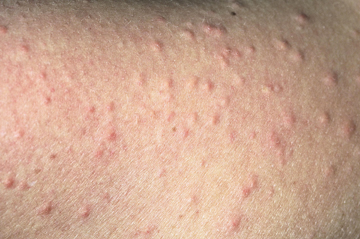 These pruritic papules of acute onset had failed to respond to topical corticosteroids, oral antibiotics, and intra-muscular corticosteroid injection. The 42-year-old patient denied recent use of a hot tub, foreign travel, illness, and joint pain.

Her past medical history revealed that she had been hospitalized 6 years earlier for pancreatitis, the cause of which was unknown to the patient, although she did recall being told that her triglyceride level was too high. Atorvastatin was prescribed, but she stopped taking it after 1 week and had had no problems until recently.

On examination, the papules, which were noted to average about 3 mm, were pinkish brown in color and quite firm. The differential included generalized granuloma annulare and secondary syphilis. Punch biopsy was performed, and the results showed foamy, lipid-laden histiocytes, consistent with the clinical diagnosis of eruptive xanthomas.

The patient’s serum triglyceride level was 3845 mg/dL (the normal level is less than 100 mg/dL). Her blood glucose level was within normal limits.

Treatment with fenofibrate and atorvastatin completely abolished the pruritus. The patient was then referred to an endocrinologist for management.

Eruptive xanthomas occur almost exclusively in patients with hypertriglyceridemia, which if left untreated can lead to acute pancreatitis.