Eosinophilic Gastritis: An Uncommon Cause of Epigastric Pain

A 41-year-old man presented for follow-up of epigastric pain, which had been recalcitrant to treatment with various antacids, H2 blockers, and proton pump inhibitors (PPIs). The patient had initially presented 7 years earlier, with complaints of early satiety, epigastric pain, heartburn, and indigestion; all symptoms were worse following meals. He had reported no nausea, vomiting, hematemesis, or melena.

At the time of the initial presentation, the patient had undergone a barium esophagram, which revealed spontaneous gastroesophageal reflux, with evidence of distal esophagitis. Cisapride was prescribed; however, his symptoms continued unabated, and he was referred to a gastroenterologist. A biopsy specimen was obtained during esophagogastroduodenoscopy (EGD); a rapid urease (CLO) test revealed no evidence of Helicobacter pylori. No specimen was sent for histologic examination at this time. 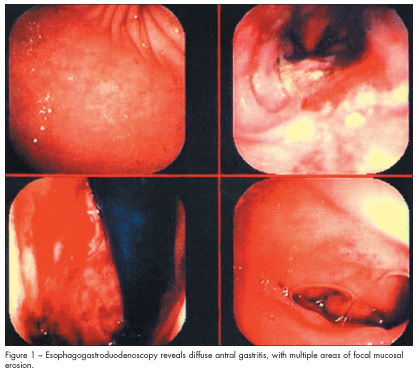 Over the next 7 years, the patient was treated with a variety of H2 blockers, PPIs, and prokinetic agents, none of which relieved his symptoms. Following this period, he underwent a repeated EGD, which showed diffuse antral gastritis, with multiple areas of focal mucosal erosion (Figure 1). The patient’s CLO test was negative for evidence of H pylori. Histologic examination of biopsy specimens confirmed the presence of both acute and chronic gastritis, as evidenced by the presence of cells associated with acute inflammation (neutrophils) and chronic inflammation (plasma cells and lymphocytes) (Figure 2). The key to this patient’s diagnosis, however, lay in the presence of an unexpected type of inflammatory cells—eosinophils. Sheets of these cells, staining intensely red, can be seen infiltrating into the muscularis propria in Figure 3. 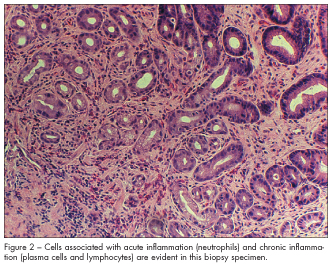 On the basis of the patient’s new diagnosis of eosinophilic gastritis, a short course (7 days) of oral corticosteroids was prescribed. He reported that he was unable to retain the pills, owing to nausea and vomiting. He was then treated with an intramuscular injection of methylprednisolone (125 mg), followed by another short course of oral corticosteroids (this time, accompanied by promethazine). He was able to tolerate this regimen, and he reported a marked reduction in his symptoms of dyspepsia.

Eosinophilic gastritis, an autoimmune disorder first described by Kaisjer1 in 1937, is a relatively uncommon cause of dyspepsia. This inflammatory condition involves the infiltration of various layers of the stomach wall by eosinophils. There is no known cause, but many theories, including allergic reaction and parasitic infestation, have been proposed.

Fewer than 300 cases have been described in the literature2; however, a case series suggests that approximately 1 in 300 patients with dyspepsia who undergo EGD has eosinophilic gastritis.3 The disorder affects both genders equally, with a typical age at presentation of 35 to 45 years.4 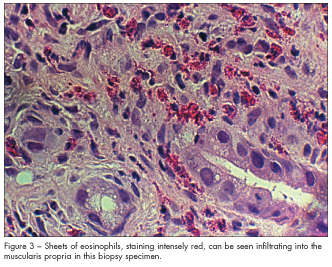 Because the symptoms produced by eosinophilic gastritis are similar to those produced by gastroesophageal reflux disease, peptic ulcer disease, and non-ulcerative dyspepsia, eosinophilic gastritis is seldom suspected in the initial evaluation of patients with dyspepsia. Failure to respond to antacid- or motility-based therapies, or the presence of obstructive symptoms (eg, dysphagia), should prompt consideration of endoscopic investigation.

Clinical features. Clinical manifestations typically include early satiety, epigastric pain, diarrhea, nausea, and vomiting, but can culminate in more serious symptoms, such as upper gastrointestinal bleeding, weight loss, and anemia (Table).5 Preferential involvement of different layers of the gastric wall can produce specific clinical effects. When the predominant involvement is mucosal, the presentation tends to be pain and bleeding; when the submucosa or muscularis is affected, patients usually present with obstruction.6 If the eosinophilic inflammation extends from the stomach to the duodenum, patients may exhibit malabsorption, resulting in hypoproteinemia7 and/or ascites.8

Diagnosis. Although approximately 80% to 90% of patients have some degree of peripheral eosinophilia, definitive diagnosis of eosinophilic gastritis rests on obtaining histologic specimens via endoscopic biopsy.9 Gross findings at the time of endoscopy can range from normal to such abnormalities as prominent antral folds, hyperemia, nodularity, and ulcers.

Failure to diagnose eosinophilic gastritis early in the course of the patient’s illness can result in protracted periods of unrelieved symptoms, and in surgical interventions. Various types of gastrostomies and gastrectomies, including Billroth II resections, have been described in the literature for patients who had undiagnosed eosinophilic gastritis.10,11 A number of these interventions occurred even though the patient had undergone EGD12; in at least one case, a biopsy obtained during a previous EGD had demonstrated eosinophilic infiltration of the gastric mucosa.13 One unfortunate patient underwent a Billroth II resection, despite having received 12 prior endoscopies which failed to result in the correct diagnosis.14

Implications for primary care practice. Eosinophilic gastritis is an uncommon but important cause of upper abdominal symptoms, including dyspepsia. Left undiagnosed, patients are likely to continue to experience unabated symptoms, and they may have morbidity from surgical interventions that might have been avoided with timely and appropriate therapy. Eosinophilic gastritis should be included in the differential diagnosis of patients with dyspepsia that is unresolved despite
acid-suppressive therapy. Arranging for prompt endoscopic investigation of these patients (with pathologic examination of biopsies of inflamed mucosa) seems prudent.