Eosinophilic Esophagitis in a Teenage Boy With Food Impaction

A 15-year-old boy was transferred to the emergency department from an outside hospital because of abdominal discomfort and persistent emesis that had developed after he had eaten a hot dog and part of it became lodged in his throat. The patient had attention-deficit/hyperactivity disorder, for which he took methylphenidate extended-release tablets. His father had peptic ulcer disease, and his mother had allergic rhinitis. His 16-year-old sister was healthy.

Examination revealed a well-nourished patient in no apparent distress, with weight (51.4 kg) and height (162 cm) both in the 25th to 50th percentile and normal vital signs. Lungs were clear with no wheezes. Heart rate and rhythm were regular, without murmurs. Abdomen was soft, nontender, and nondistended, with positive bowel sounds. 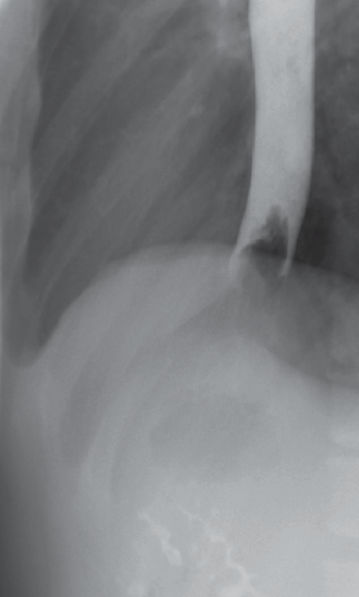 Figure 1. A foreign body in the distal esophagus with dilation of the proximal esophagus is apparent in this esophagram of a teenage boy with food impaction.

The patient underwent esophagogastroduodenoscopy (EGD), during which the hot dog (Figure 2) was successfully removed and multiple biopsies were obtained from the esophagus, stomach, and duodenum. The esophageal biopsy specimen showed multiple intraepithelial eosinophils, up to 20 per high-power field (HPF) (Figure 3). Eosinophilic esophagitis (EE) was diagnosed, and treatment with fluticasone was started. The patient subsequently underwent allergen testing. The results were negative for both food allergens and aeroallergens. 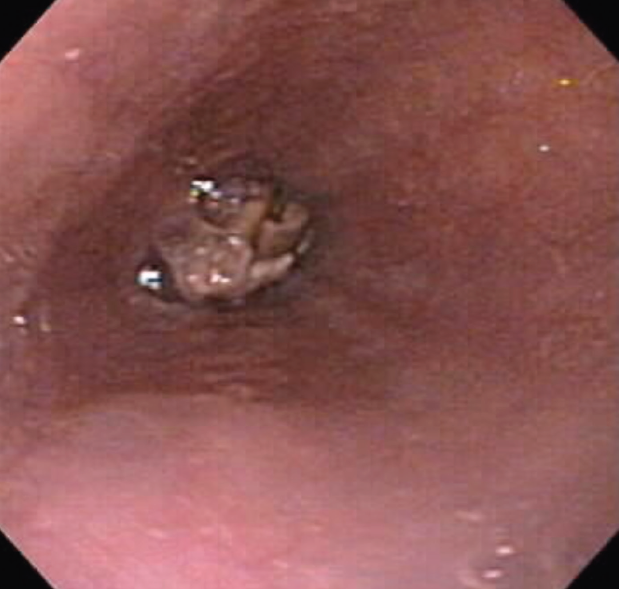 Figure 2. This image taken during esophagogastroduodenoscopy shows the hot dog lodged in the esophagus. 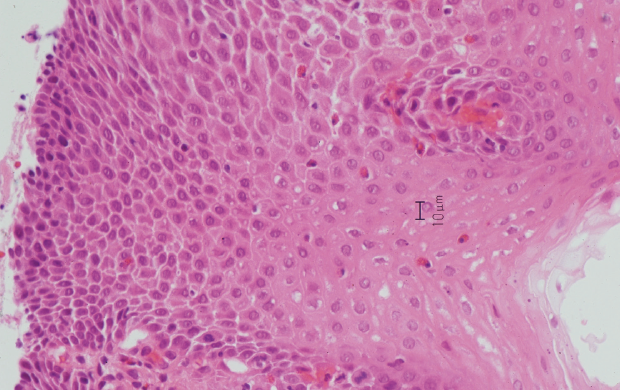 Figure 3. An esophageal biopsy specimen with multiple intraepithelial eosinophils, up to 20 per high-power field, is shown.

EE is characterized by an eosinophilic infiltration of the esophagus that is suspected to be a reaction to an antigen. Multiple studies have demonstrated a correlation between EE and atopic disease, such as eczema, asthma, seasonal allergy, and food allergy.1-4 EE is more common in Caucasians, and a male predominance has been reported. The pathogenesis, although still being determined, may involve Th2 cells, IL-5, eotaxin-3, and IL-13.5

Diagnosis. EE is difficult to diagnose solely on the basis of the clinical features and can be frequently misdiagnosed as gastroesophageal reflux disease (GERD), as the 2 conditions share similar symptoms. EE should be considered in the otherwise healthy child or teen with food impaction and especially in patients with GERD symptoms, male gender, and a personal or family history of atopy.

In the case of food impaction, as in this patient, the differential diagnosis would include achalasia and esophageal stricture caused by GERD. However, in patients with achalasia, you would expect to find a dilated esophagus with tapering at the gastroesophageal junction. On EGD, EE typically involves both the proximal and distal esophagus, whereas GERD affects primarily the distal esophagus. In GERD, biopsy usually shows only 0 to 5 eosinophils per HPF.1 In addition, patients with GERD usually respond to acid suppression alone, whereas patients with EE do not.

EE is diagnosed by esophageal biopsy, which shows more than 20 to 24 eosinophils per HPF or 15 or more eosinophils in at least 2 HPFs. EGD findings in EE may show white plaques, erythema, edema, and granularity or nodularity, or they may reveal complications, such as strictures (particularly proximal), esophageal rings, linear furrowing, ulcerations, and esophageal polyps.1,3 However, the esophagus may appear grossly normal on EGD.1

Management. There is no cure for EE. The goal of treatment is to control symptoms and limit complications. Allergen testing is recommended, even though patients with EE often do not have a clinical history of food allergy or anaphylaxis. Those who do have positive test results should remove the specific allergen from his or her diet.

Dietary management, with either an elemental diet or elimination of specific allergens, has been shown to reduce the eosinophil infiltrate in the esophagus and lead to resolution of symptoms.2-4,6 However, this diet is often impractical, and compliance is difficult to maintain.

Corticosteroids have been shown to reduce symptoms and eosinophil infiltrates.2,3,6 A retrospective review of 330 children younger than 6 years with EE found that those treated with dietary management or medication had reduced EE symptoms compared with untreated patients; however, only a small subset of patients achieved complete resolution.4 Multiple trials investigating new treatments, such as cytokine-based therapy, are currently underway.

EE is an increasingly recognized disease that should be considered in the otherwise healthy child or teen with food impaction and especially in patients with GERD symptoms, male gender, and a personal or family history of atopy.