Dr Clark is a board-certified family physician serving in the United States Navy with Fleet Surgical Team No. 2 in San Diego. He is a graduate of the Camp Pendleton family medicine residency. Dr Holman is adjunct associate professor of medicine at the Uniformed Services University of the Health Sciences in Bethesda, Md. He is also associate program director of the family medicine residency at Camp Pendleton Naval Hospital.

ABSTRACT: The growing epidemic of type 2 diabetes makes it imperative to identify persons at risk, screen for impaired glucose tolerance (IGT), and treat to prevent progression. Calculation of body mass index (BMI) is an appropriate starting point for identification of patients with possible IGT. Those with a BMI of less than 25 are at low risk for diabetes and do not need further screening. Patients aged 45 years or older with a BMI of 25 or higher require a full lipid panel, fasting plasma glucose tests, and an abdominal circumference measurement. If the fasting plasma glucose level is higher than 110 mg/dL, treatment is needed to prevent diabetes. Lifestyle intervention is a cornerstone of therapy.

Until relatively recently, type 2 diabetes mellitus--formerly known as "adult-onset diabetes"--was considered a geriatric disorder. The long-term complications of this disease were not completely understood, and patients were often treated only palliatively.

As the age at diagnosis has shifted downward and the prevalence has risen, morbidity and mortality associated with diabetes have markedly increased.1 In 2002, the CDC reported that 18.2 million Americans (6.3% of the population) had diabetes. The condition is undiagnosed in more than one third of these patients.2 By 2050, the numberof persons with diabetesis expected to increase by 165%.3 The rate is expected to rise even faster in developing countries--from 110 million to 220 million by 2010.4,

It is unclear whether some or most of the increased prevalence of diabetes in the United States is attributable to population growth, the aging of the population, increasing life expectancy, better treatment, or shifting ethnic demographics. The 11-year San Antonio Heart Study showed that the true prevalence of diabetes within a homogeneous population increased every year during the study.6 Thus, the total number of persons with diabetes is increasing, independent of shifts in demographics. Another study estimated the lifetime incidence of diabetes in persons born in 2000 to be 33% and 39%, respectively, for males and females.7 The comparable rates for Hispanics are 45% and 53%.

At the time of diagnosis, persons with diabetes have already undergone metabolic disturbances that increase the risk of cardiovascular disease as early as 15 years before diagnosis.8 With the rapid rise in prevalence, and predictions of a worldwide pandemic, prevention is the focus of much attention.4 Randomized controlled trials have shown that interventions for prediabetes--such as therapeutic lifestyle changes--are effective.9-14

In this article, we discuss how to identify persons at risk, screen for impaired glucose tolerance (IGT), and treat to prevent progression.

IDENTIFICATION OF PATIENTS AT RISK

The American Diabetes Association recommends screening for diabetes with a fasting plasma glucose test at age 45 years and every 3 years thereafter.15 The US Preventive Task Force recommends screening only persons older than 40 years who have hypertension or dyslipidemia.16 There are currently no guidelines for generalized screening, identification of persons at risk for prediabetes, or recommended interventions.

Rationale for screening. No evidence shows that screening of the general population for prediabetes is cost-effective.17 There is also no strong evidence that population-wide screening of asymptomatic patients for diabetes and subsequent early treatment improve long-term outcomes. Nevertheless, the impending epidemic of diabetes and the increasing evidence of the effectiveness of prevention suggest that action is imperative. As diabetes develops in younger patients, more complications will occur at earlier ages, as seen in the Pima Indians.18Identification of persons at risk will enable preventive measures to be instituted early enough to have a significant impact.A recent study demonstrated that lifelong intensive interventionsin patients with prediabetes can be cost-effective because these interventions delay or prevent the onset of diabetes.19

Definition of prediabetes. Almost all the prevention studies de-fine prediabetes as abnormal results on an oral glucose tolerance test (OGTT). Patients with a 2-hour postprandial glucose level of 140 to 200 mg/dL are considered to have IGT. The OGTT is expensive, cumbersome, and inconvenient and is not recommended as a general screening test. However, current studies have used this test to define IGT. Most studies included patients with a body mass index (BMI) of 24 or 25, age of at least 25 years, and fasting glucose level of 95 mg/dL.9-14 The prevalence of progression from IGT to diabetes is much higher at 40 to 49 years than at 25 to 40 years and peaks at 60 to 74 years.19 If prediabetic intervention can reduce the progression from IGT to diabetes, the benefit will be dramatic, because 28% to 68% of patients with IGT progress to diabetes within 3 to 6 years.10-12

Which patients to screen. A number of markers correlate with an increased risk of IGT. These include impaired fasting glucose, elevated levels of hemoglobin A1c, the metabolic syndrome and its individual components, and obesity.20

The first step in the identification of patients with possible IGT is to calculate the BMI (weight in pounds divided by height in inches squared, multiplied by 703).Patients with a BMI of less than 25 are at low risk for diabetes and do not need further testing.21

The following are general recommendations for screening (Table 1):

A number of options are available for patients who have IGT or prediabetes.

Therapeutic lifestyle changes. Three randomized clinical trials of lifestyle interventions show a 46% to 58% reduction in the progression from IGT to diabetes over the course of 2.8 to 6 years.10-12 The incidence in the placebo groupwas 28.9% at 2.8 years in one study and 68% at 6 years in another. The general goals of therapeutic lifestyle changes include increasing strenuous physical activity to 150 minutes per week; more healthful diet (more fruits, vegetables, fiber, fish, and polyunsaturated/monounsaturated fats; decreased consumption of red meat, cholesterol, saturated fat, processed carbohydrates, and sweets); and a weight loss of 5% to 7%.

The study most relevant to the American population, the Diabetes Prevention Program (DPP), sought to determine whether a lifestyle intervention program or treatment with metformin would prevent or delay the development of diabetes.10 In the lifestyle intervention arm, 50% of patients met the weight-loss goal of 7% at 1 year and 38% met it at 3 years. The goal of 150 minutes of physical activity per week was achieved by 74% at 1 year and 58% at 3 years. Despite a goal achievement rate that was lower than hoped, the incidence of diabetes in the lifestyle intervention group was reduced by a dramatic 58% over 3 years.

In the Finnish Diabetes Prevention Study, dietary changes included decreased consumption of saturated fat, sugar, and salt and increased intake of vegetables and healthful fats.11 A graded decrease in the progression todiabetes was seen as more therapeutic lifestyle goals were met. When patients reached all 5 goals (more than 30 minutes per day of exercise, fat intake less than 30% of calories, saturated fat intake less than 10% of calories, fiber intake more than 15 g/d, and a weight loss of 5% or more),the rate of progression to diabetes was almost zero.

Therapeutic lifestyle changes are first-line therapy in most patients with prediabetes.The number needed to treat to prevent 1 case of diabetes in the DPP was only 7. The cost per quality-adjusted life-years (QALY) is only $1100.17 In comparison, the QALYs for intensive glucose control and statin therapy in patients with newly diagnosed diabetes are $41,000 and $52,000, respectively.

Metformin. In the DPP, metformin, 850 mg/d, was compared with placebo and therapeutic lifestyle changes. The progression to diabetes in the metformin group decreased by 31% over 2.8 years; the number needed to treat was 14.10The compliance rate in the treatment group was 72%. Because metformin is a treatment for diabetes, concern arose that the researchers were seeing a masking effect, not prevention. A subsequent analysis showed an initial increase in diagnosed diabetes after discontinuation of metformin, which reduced the true effectiveness by about 25%.24 It was also noted that metformin was more effective in the younger, heavier patients.10

Whether there is an additive effect of metformin (or any preventive medication) and lifestyle intervention remains unclear.

Alpha-glucosidase inhibitors. One trial showed that acarbose, 100 mg 3 times a day, reduced by 26% the progression to diabetes in patients with IGT.9 The effect was significant despite a discontinuation rate of 25% (primarily because of GI effects). About 25% of the positive effect was lost once the medication was discontinued. A secondary outcome of the trial was a significant reduction in cardiovascular events and hypertension.25

Thiazolidinediones. Troglitazone, the only thiazolidinedione that has been studied in controlled trials, was withdrawn from the market because of reports of liver failure. This agent was associated with significant decrease in progression to diabetes.13 Research with the newer thiazolidinediones will determine whether they will be as effective.

GI lipase inhibitors. Any strategy that produces weight loss in overweight persons--including gastric reduction surgery--lowers the incidence of diabetes.26 Orlistat, a GI lipase inhibitor, reduces the progression of IGT to diabetes.14 In one study, more than 3300 patients undertook lifestyle changes and were randomly given placebo or orlistat. Both groups received dietary counseling and were encouraged to walk an additional kilometer per day. There was a 37.3% reduction in the risk of progression to diabetes in the orlistat group. All patients had a BMI of 30 or more, but only 21% had IGT.

Monitoring the traditional diabetes risk factors of age, obesity, inactivity, family history, and gestational diabetes is just a start toward prevention. A second approach is the modification of known epidemiologic factors that increase the prevalence of diabetes. Many long-term risk factors have been elucidated by cohort studies, including the Nurses' Health Study and the Health Professionals' Follow-up Study.27-32 Some of these are listed in Table 2. 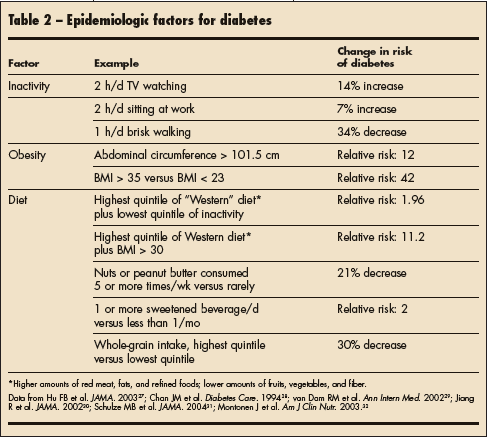 Offer information about these risk factors to patients of all ages--even to parents at well-baby examinations. In addition, consider becoming actively involved in community diabetes awareness, education, and prevention programs. For example, you can campaign in schools for the removal of sweetened drinks and fast food and the retention of physical education requirements.

24. Diabetes Prevention Program Research Group. Effects of withdrawal from metformin on the development of diabetes in the diabetes prevention program.  Diabetes Care. 2003;26:977-980.