For 2 months, a pruritic rash had been present on the upper back of a 48-year-old woman with a 1-year history of chronic myelogenous leukemia (CML) and a 2-year history of hepatitis C. Subcutaneous interferon alfa (9 million units daily) and subcutaneous cytarabine (7.5 mg daily) had been initiated for her CML 5 months and 3 months prior to presentation, respectively. The patient also noted recently worsening “asthma.”

Physical examination revealed confluent waxy flesh-colored papules on the upper back. The patient also reported a tender subcutaneous buttock mass, which had been present for 2 months. Biopsy of the upper back papules and buttock mass showed discrete granulomas compatible with sarcoidosis. Stains for infectious agents were negative, and polarizable material was not demonstrated. Transbronchial biopsy results were also consistent with sarcoidosis. A standard anergy panel did not reveal cutaneous anergy, and a tuberculosis skin test (purified protein derivative) was negative. 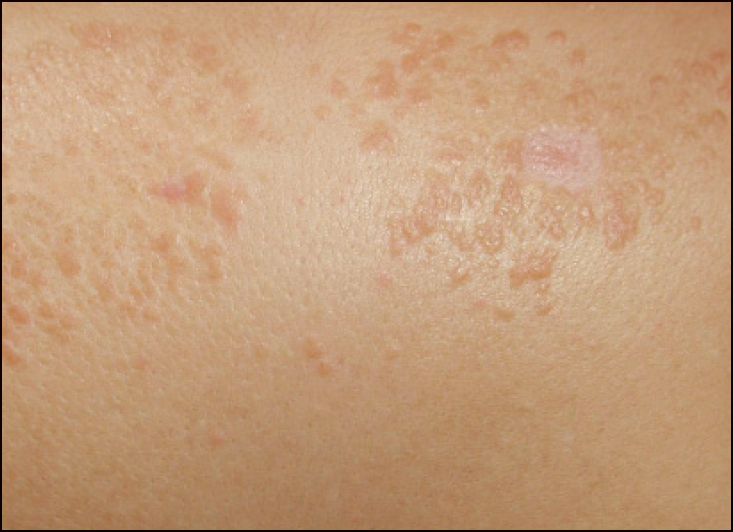 Because of the lack of response of the leukemia to the chemotherapeutic regimen, both medications were discontinued. After cessation of chemotherapy, the cutaneous lesions gradually resolved with complete clearing of the patient’s back. Her pulmonary status remained unchanged; however, it was stabilized with occasional use of bronchodilator inhalers.

Sarcoidosis is a granulomatous disease of unknown etiology that can affect multiple organ systems. It may be associated with malignancy, as well as with interferon alfa–treated conditions such as hepatitis C and CML.1 In particular, the correlation between sarcoidosis and extracutaneous systemic lymphomas is well described.2 This case is notable for the presentation of sarcoidosis in a patient with both CML and hepatitis C treated with interferon alfa.

A diagnosis of sarcoidosis involves correlation of clinical, radiologic, and histologic findings. Evidence of an infectious etiology should be eliminated as the cause of the granulomatous response before a diagnosis of sarcoidosis can be made.3 Although sarcoidosis had traditionally been excluded as a diagnosis when foreign material was demonstrated in typical “sarcoidal” granulomas, more recent reports suggest that the simultaneous presentation of foreign body granulomas and systemic sarcoidosis does occur. Therefore, the presence of foreign material in a typical sarcoidal granuloma does not rule out sarcoidosis.4

Genetic susceptibility and environmental agents such as beryllium exposure have been proposed as additional contributing factors to sarcoidosis. Major histocompatibility genes have been identified in the phenotypic expression of sarcoidosis, and a compelling link of genetic factors as the most significant determinant in racial epidemiologic variations has been made.5 Exposures to farm animals, firewood burning, and natural spring water have also been proposed as potential risk factors for sarcoidosis.6

Theories about the association between cutaneous lymphoma and sarcoidosis have focused on persistent antigenic stimulation speculated to be common to both.2 The immunomodulatory effects of interferon alfa, including a possible change in cytokine secretion, have also been postulated to play a pathogenic role—both alone and in combination with neoplastic proliferative states—in inducing sarcoidosis.2 It is also interesting to note that infectious agents, especially mycobacteria, have been identified by polymerase chain reaction/restriction enzyme pattern analysis in some cases of sarcoidosis; however, evidence of pathogenicity in all cases is lacking.7