What Is This Pruritic Rash on an Older Man’s Chest?

A 72-year-old man presented to our clinic with a rash on his chest. The rash had been present for 1 month and was pruritic and red. The patient reported that the rash had spread to his neckline and that it may have been a result of sweating heavily during a concert he had recently attended.

He did not have a history of chronic disease and did not take any long-term medications. He also reported not having visited a doctor in 2 years.

The physical examination findings were unremarkable except for a nontender, maculopapular and pruritic rash primarily on the chest (Figure). There were also areas of raised erythema primarily under the breast with eroded papules. The patient’s vital signs were within normal limits, and results of a complete metabolic panel were normal. A hepatitis screen was conducted, results of which were negative 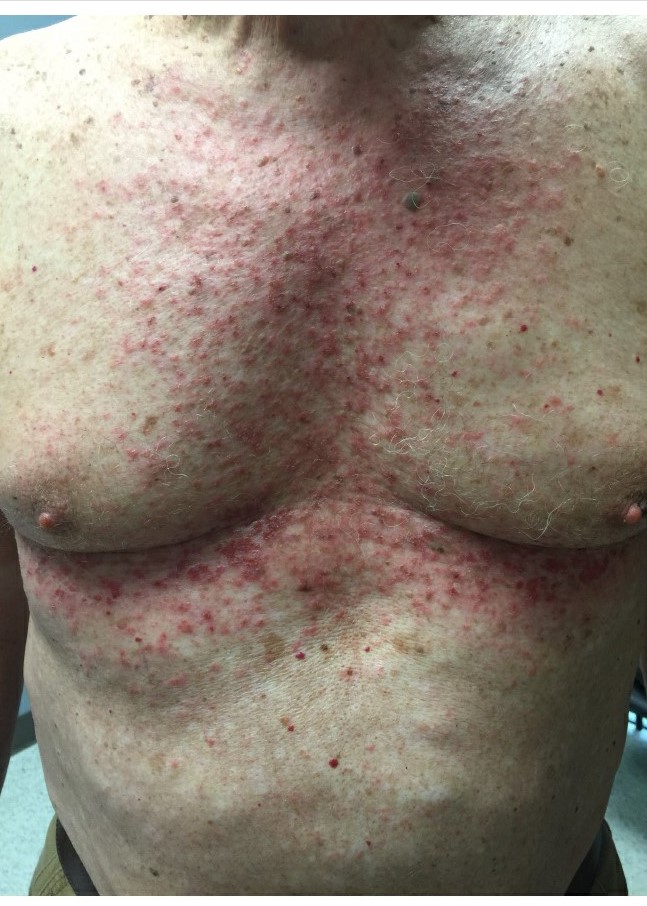 Transient acantholytic dermatosis is a pruritic, erythematous eruption that tends to affect the chest and back. Involvement of the face, palms, and soles is rare. It is most common among White men older than age 50 years. The rash can also present with keratotic papules, papulovesicles, and papulosquamous plaques, which are often eroded and crusted. Suspected triggers for transient acantholytic dermatosis include heat, sweat, sunlight, radiation, end-stage renal disease, hemodialysis, mechanical irritation, prolonged bedrest, and solid-organ transplantation.1 It is also associated with certain cancer medications, other coexisting dermatoses such as atopic and contact dermatitis, xerosis cutis, and bacterial or viral infections. The rash is often noticed after prolonged periods of fever, hospitalization, or bedrest. It can wax and wane, be self-limiting (resolves in 2-4 weeks), or be persistent and is known to flare in the winter months.

The suspicion for transient acantholytic dermatosis was strong for our patient, given the erythematous and intensely pruritic rash, central-chest location, and patient’s ethnicity and age. In addition, the development of the patient’s rash after a concert suggests that a combination of heat and sweat could have triggered the onset. This was further confirmed given that most of the eroded papule clusters were in the folds of the skin most prone to heat and sweat (ie, under and in between the breasts).

To confirm the diagnosis, a skin biopsy was required. The main pathological feature on biopsy is acantholysis (ie, the loss of desmosome cell adhesion between keratinocytes within the epidermis). The patient’s pathology report described the biopsy specimen as a focal acantholysis and dyskeratosis in the epidermis with an infiltrate of lymphocytes and histiocytes in the papillary dermis.2 No additional laboratory test or imaging findings were needed to confirm the diagnosis.

Discussion. The differential diagnoses are listed in the Table. Truncal seborrheic dermatitis can show the following common variations: fine, scaly, thin plaques over the sternum; annular, slightly scaly plaques on the trunk sometimes with hypopigmented central clearing; a pityriasiform pattern mimicking pityriasis rosea with 5 to 15 mm oval-shaped, scaly lesions along tension lines of the skin; or a psoriasiform pattern with large red, rounded plaques covered with thick scales.3 Our patient’s intake photo shows a primarily erythematous maculopapular rash and does not show a scaly appearance associated with seborrheic dermatitis.

Keratosis follicularis is caused by an ATP2A2 gene mutation and is typically seen in younger populations (ie, 6-20 years old) with a positive family history. The rash can involve intertriginous areas like the groin, axillae, and perineum; can present with flexural lesions; and can often affect the hands—none of which are depicted in our patient’s intake photo.4

Intertrigo is commonly found in skin folds exposed to high moisture, sweat, friction, and infection such as folds of the groin, axillary area, inframammary area, umbilicus, and under the panniculus. The rash is usually erythematous with moist patches limited to the intertriginous area and does not include vesicles, bullae, extensive erosions, or vegetative plaques.5 Our patient’s intake photo shows a maculopapular rash with eroded papules, and the rash is diffusely spread around the central chest. 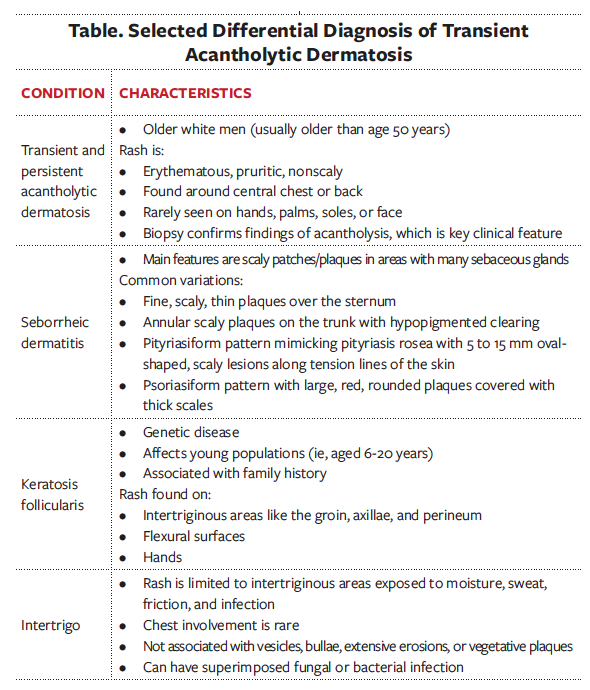 Outcome of the case. Results of a biopsy confirmed the diagnosis of transient acantholytic dermatosis. Our patient was started on a topical corticosteroid twice daily. Over the course of 4 weeks, the rash had resolved.