Tomato Allergy and the Link to Fragrance Allergy

DISCLOSURES:
Araidna Perez Sanchez, MD, reports no relevant financial relationships. Rajani Katta, MD, is the author of a book for the general public on dermatology and serves on the advisory board of Vichy Laboratories.

A woman in her 50s presented to a dermatology practice with concern for a rash that had developed 7 months prior to presentation. The rash had initially begun with dry scaling areas on the forehead and temples. She later developed more erythema. Over the next few months, the rash became more extensive, at times covering most of her face and extending to her neck. She also had periodic severe flares. She had more recently also developed redness and severe scaling of the lips.

Her history was notable for several triggering factors. The use of a new facial wash had resulted in a facial rash 2 days after use. She had also noted several flares following the ingestion of tomatoes. Her occupation was office-based. Potential other exposures included the use of makeup, the use of hair dye and artificial nails, and occasional gardening.

Due to her severe and extensive facial rash, laboratory and histologic testing had been completed at an outside practice prior to presentation. The results of extensive laboratory testing for collagen vascular diseases, including lupus, had been negative. A skin biopsy from the face showed chronic dermatitis with eosinophils, consistent with allergic contact dermatitis.

On physical examination at the current visit, red scaling patches were present on the patient’s forehead (Figure), temples, cheeks, and lateral neck. She also had extensive scaling of the lips. She underwent the standard North American Contact Dermatitis Group patch test series, a preservatives series, and testing for additional selected allergens. On testing, she reacted to balsam of Peru, fragrance mix, and multiple other fragrance allergens. She was advised to avoid any skin care products that contained fragrance additives. She was also advised to be cautious with flavorings, such as those used in toothpaste, chewing gum, and lip balms. 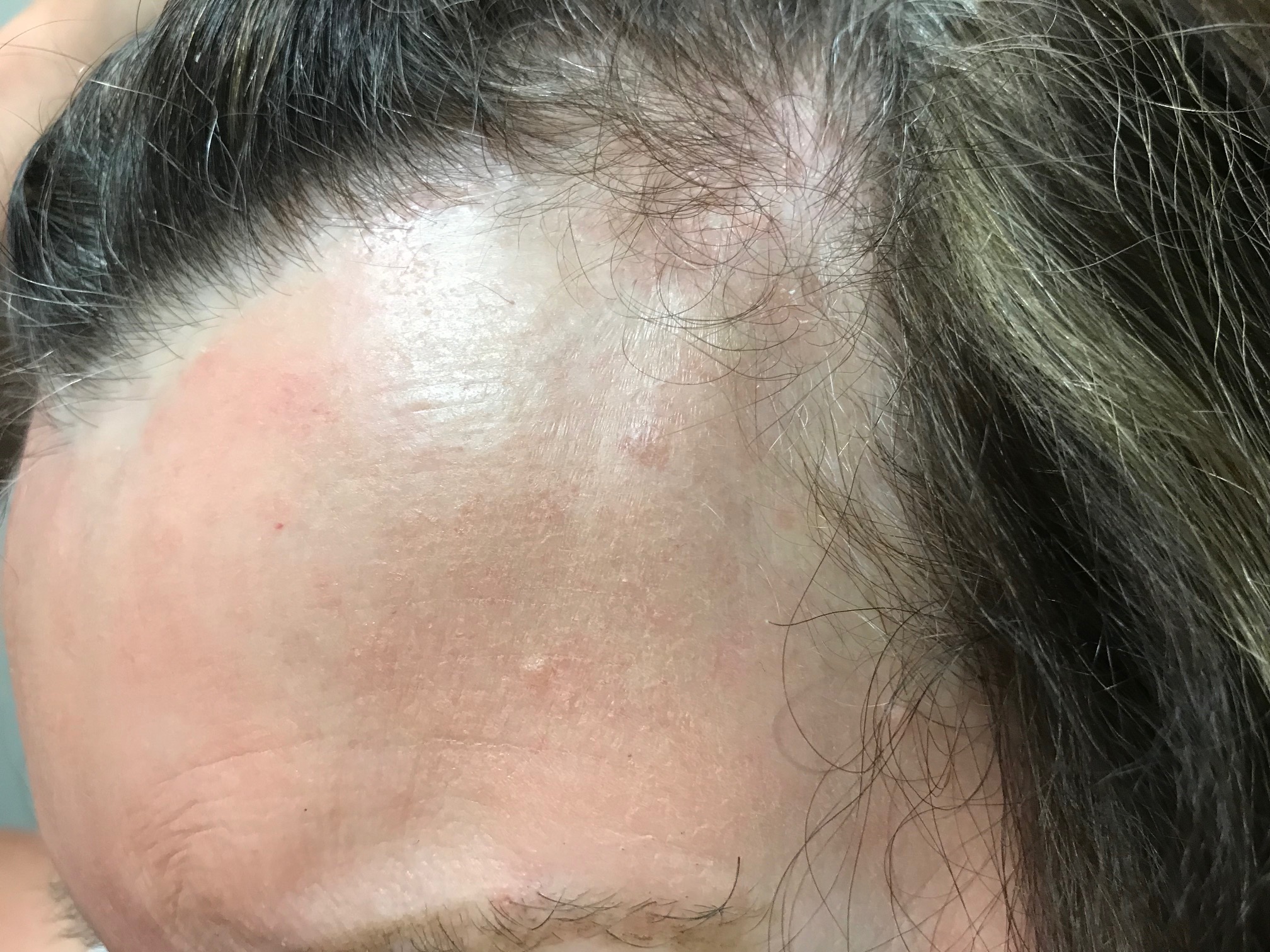 Given her extensive skin involvement, the patch testing results, and her history of reactions to tomatoes, she was advised to start a balsam of Peru avoidance diet. She reported significant improvement at telephone follow-up 4 weeks later following a change in topical products and avoidance of balsam of Peru-containing foods.

The compound is derived from the tree Myroxylon balsamum var pereirae,2 and its primary function is to improve recovery of the tree’s surface after damage.3 Balsam of Peru breaks down chemically into several component groups. These include the vanillin group, the cinnamate group, the eugenol group, the benzoate group, the coniferin group, and the ferulic acid group.3 Some of these components explain why balsam of Peru is commonly used in fragrance mixes that are added to skin care products.

The compounds in balsam of Peru are also found naturally in certain foods. Therefore, patients with this allergy may also experience systemic contact dermatitis. For patients who are allergic to balsam of Peru, the initial step is always avoidance of all external contact with fragrance additives. For some patients, however, dermatitis may persist despite avoidance of topical exposure. In this group of patients, systemic contact dermatitis should be suspected.

In one study, 45 patients who were allergic to either balsam of Peru or fragrance mix did not respond to avoidance of topical exposures and were therefore asked to follow a balsam of Peru avoidance diet for 6 weeks. Of this group, nearly half improved with avoidance of related foods.4 These foods include tomatoes, citrus, cinnamon, chocolate, and several others. Patients are advised to avoid products that contain undisclosed flavorings. Other potential food and beverage exposures include flavored colas, flavored liquors and teas, and spices, including cloves and vanilla.3