A 3-year-old boy presented for a well-child visit with a history of thrombocytopenia and absent radii (TAR) syndrome.

History. The patient had been born via cesarean delivery due to a prenatal diagnosis of TAR syndrome. At the time of birth, his platelet count was 22 × 103/µL, and he received a platelet transfusion. He had hyperbilirubinemia for which he had received phototherapy.

At the well-child visit, the mother has no health concerns about her son and states that he has been meeting all developmental milestones despite his physical abnormalities. She reported not having the child vaccinated, stating that the doctors at another hospital were unsure about how he would react to the vaccines. She noted that the patient recently had had his port removed, which had been used for platelet transfusions, since he is no longer considered to be at high risk for thrombocytopenia.

Physical examination. At presentation, the patient was active and alert, with normal neurologic development for age. His head was round and atraumatic, with a slightly prominent forehead; the rest of the ear, nose, and throat examination findings were unremarkable. The lungs were clear to auscultation bilaterally, and the heart was in regular rate and rhythm with no murmurs, rubs, or gallops. 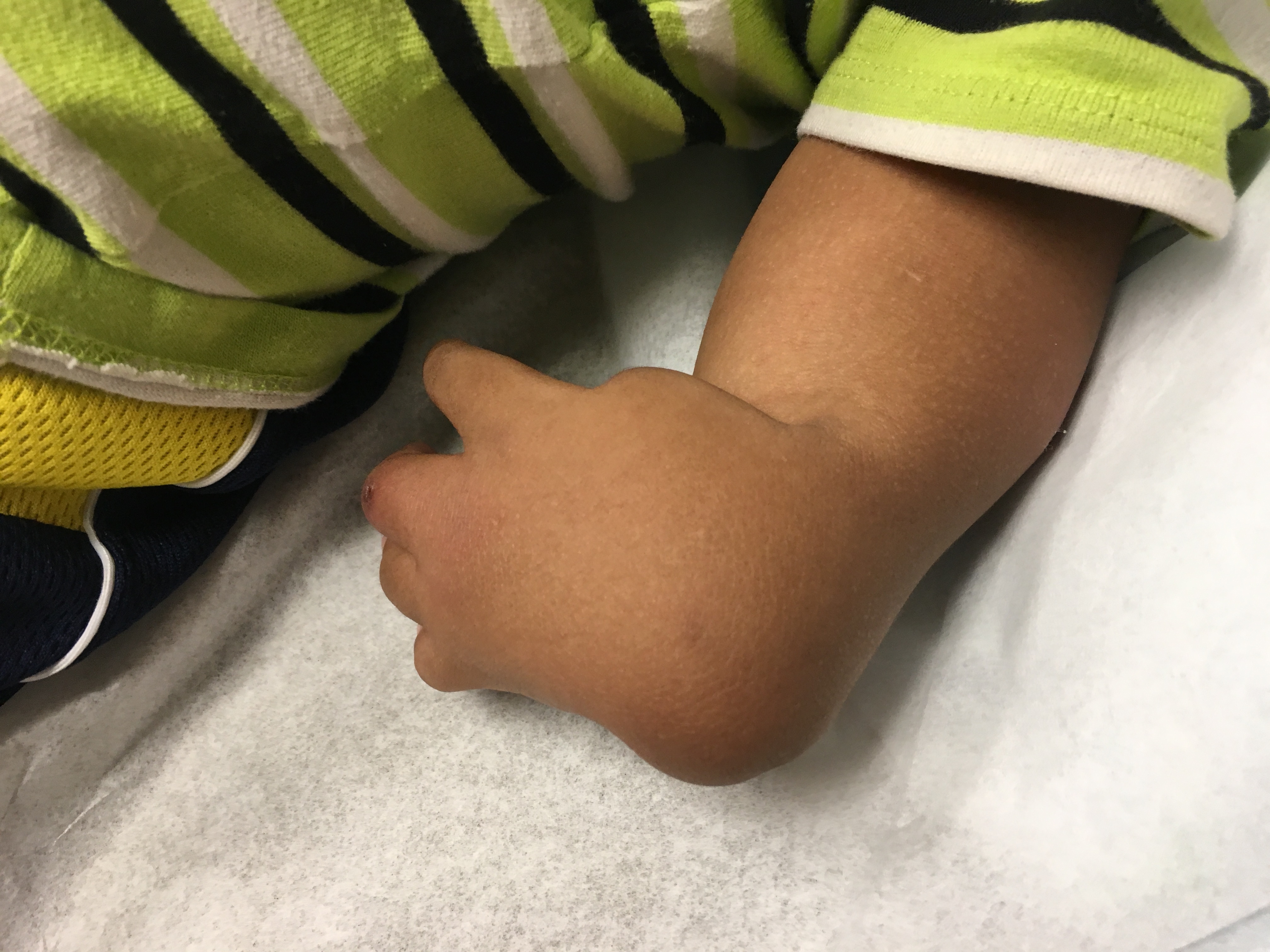 Figure 1. The patient presented with radial and ulnar aplasia. 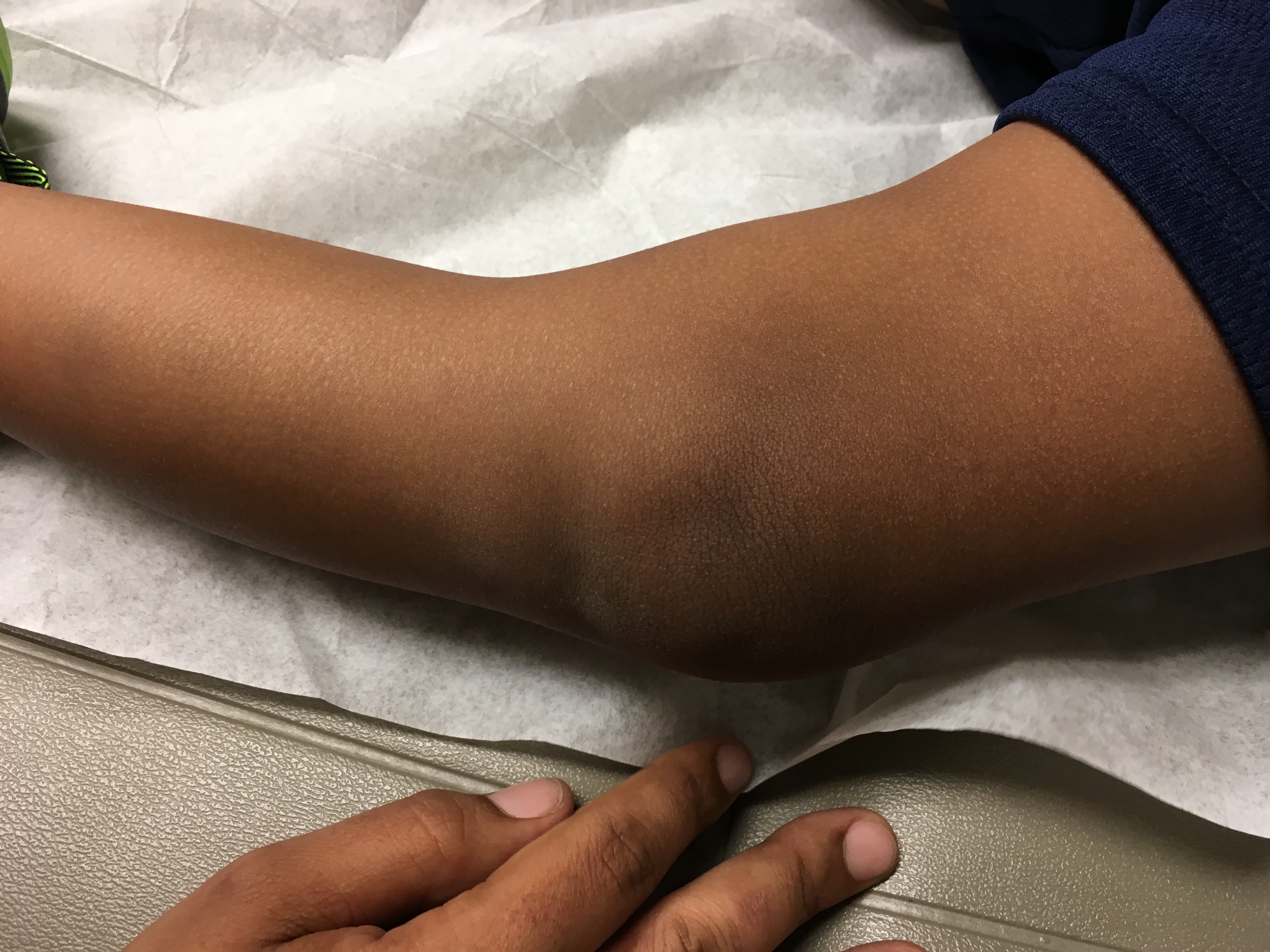 TAR syndrome is believed to be caused by an autosomal recessive mutation of the RNA binding motif protein 8A gene (RBM8A) on 1q21.1.2 This is thought to cause an exon-junction complex dysfunction and reduces RNA binding motif protein 8A, which affects the development of certain tissues.3,4 The inheritance of this mutation shows incomplete penetrance and variable expressivity.5 However, newer evidence suggests that this mutation is not enough to cause TAR syndrome, so it is thought that another uncharacterized mutation may be associated with the condition.6

Diagnosis. TAR syndrome is usually diagnosed prenatally via ultrasonography, which shows bilateral radial aplasia, club hands, and intact thumbs. After these findings are seen on ultrasonography, a cordocentesis is performed at 16 weeks in order to obtain a platelet count.7 Once diagnosed, pregnant women must be counseled on the importance of having a cesarean delivery to prevent intracranial hemorrhage as the baby goes through the birth canal.7

Presentation. TAR syndrome has a prevalence of 1 in 240,000 people and presents with varying severity of upper extremity deformities, from solely absent radii to complete phocomelia. The most common presentation of TAR syndrome is bilateral radial aplasia and thrombocytopenia of less than 50 × 103/µL at birth. Persons with TAR syndrome will have an intact thumb; this is an important distinction between TAR syndrome and Fanconi anemia.4 TAR syndrome is also commonly associated with other defects, including malformation of the ulnar bone or humerus. Some cases may present with abnormal knees, phocomelia of the lower extremities, dislocated hips, and cardiac defects such as tetralogy of Fallot, atrial septal defect, or ventricular septal defect.6-8 TAR syndrome can also include micrognathia, prominent forehead, and low-set ears.9 Associated intellectual disability is uncommon, but when it does occur it is usually a result of cerebral hemorrhage.

Management. Patients with TAR syndrome are usually nonreactive to thrombopoietin, since thrombopoietin levels are usually elevated, and thus they must be treated with platelet infusions. One must also be concerned about alloimmunization and infection, so it is best to avoid platelet transfusions in individuals whose platelet counts exceed a threshold of 10/nL.5,10 This usually requires the insertion of a central venous port to avoid repeated venipuncture.10

Parents must be educated on the avoidance of cow’s milk, since up to 62% of persons with TAR syndrome have cow’s milk intolerance. This ranges from poor weight gain or vomiting to gastroenteritis resulting in exacerbations of thrombocytopenia and increasing the risk of gastrointestinal tract bleeding.6

Orthopedic management depends on the severity of the deformity and could include total knee arthroplasty and the use of adaptive devices. The authors of one small retrospective chart and radiograph review of 23 patients with TAR syndrome found that orthotics and prosthetics were generally rejected for the upper extremity deformities, since most patients had adapted and could perform tasks without prostheses, but devices to aid in buttoning, feeding, and toileting were well tolerated.13 Overall, surgical intervention was seen as less optimal in these patients than the use of an adaptive device.

Survivability of the disease often plateaus at the age of 5 years at 78%.8

Summary. TAR syndrome is a rare disorder that results in severe thrombocytopenia, as seen in the case of the patient described here with a platelet count of 22 × 103/µL at birth, as well as severe upper extremity deformities ranging in severity of solely radial aplasia to complete phocomelia. The diagnosis is usually made prenatally via ultrasonography showing the radial aplasia, and cesarean delivery is scheduled. The differential diagnosis includes Fanconi anemia, Holt-Oram syndrome, and Roberts syndrome. Management consist of platelet transfusions at a threshold of less than 10,000/µL. Adaptive devices are generally preferred to prosthetics for upper limb deformities.