A 27-year-old man presented to the emergency department (ED) for a headache that had been present for 2 weeks. He reported that the headache was dull, varying in intensity throughout the day, worse in the morning and after work, associated with occasional light sensitivity and shoulder stiffness, and relieved by heat packs and ibuprofen. He additionally reported having night sweats, chills, fatigue, occasional blurry vision, and a 3-lb (1.4-kg) unintentional weight loss in the past month. He denied fever, nausea or vomiting, focal weakness, paresthesia, back pain, gait problems, and incontinence. He presented because his headache had become unresponsive to ibuprofen.

History. He had no history of trauma, recent travel, sick contacts, or autoimmune disease. His history was notable for a painless rash over his abdomen earlier in the year and a sexual history of unprotected intercourse with a man 2 years prior, with concern for sexually transmitted disease (STD) exposure but no testing. He denied urinary symptoms, genital lesions or pain, and discharge.

Physical examination. At presentation, the patient appeared thin but in no acute distress. His vital signs were normal except for mild tachycardia of 109 beats/min and a low-grade fever of 37.7°C. He had white exudates in his oropharynx, which scraped off with a tongue blade; hyperpigmented scars over the right T12 dermatome consistent with remote herpes zoster (Figures 1 and 2); a maculopapular rash on his shins bilaterally; and calluses with areas of hyperpigmentation on the soles of his feet (Figures 3 and 4). 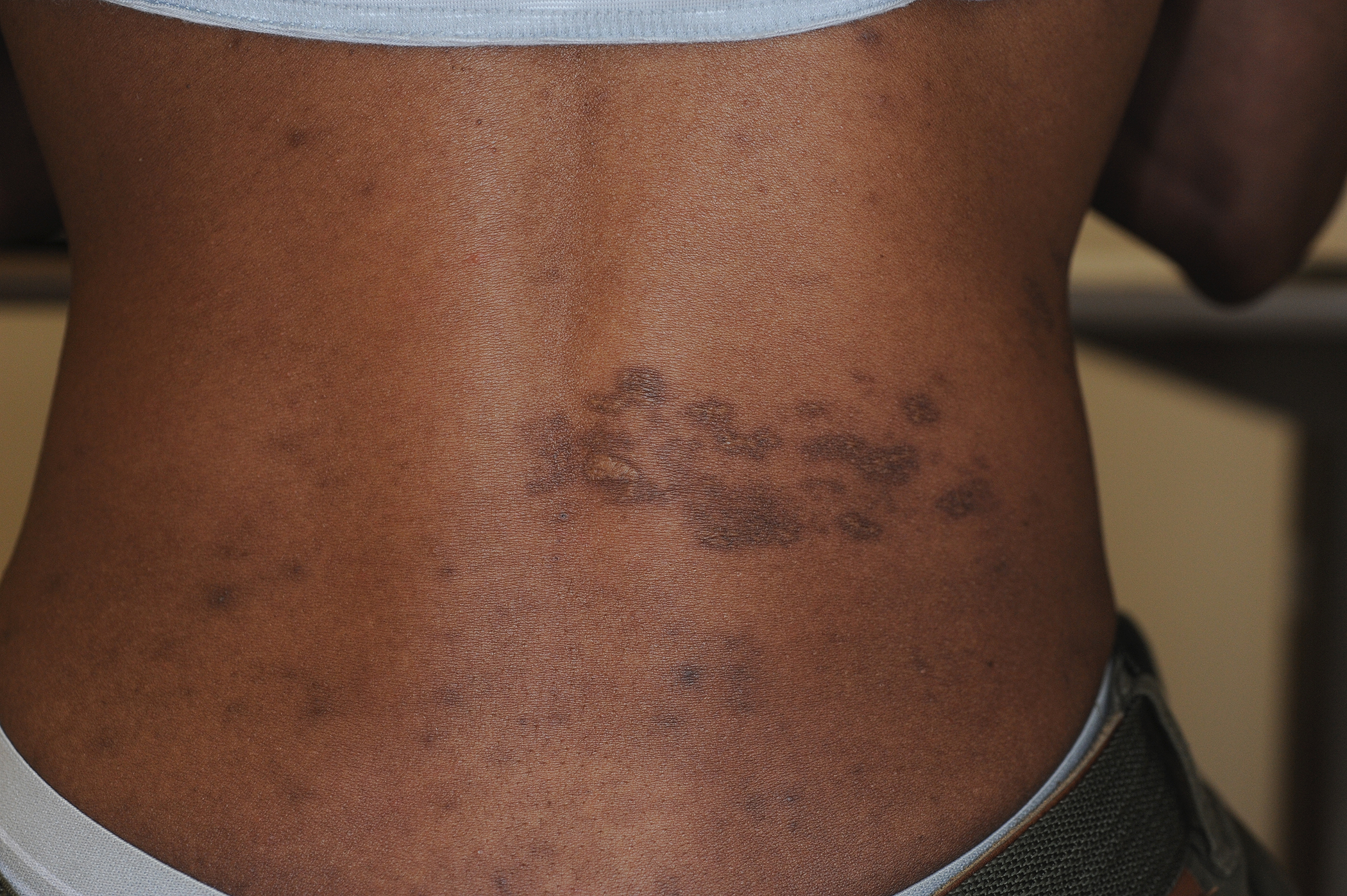 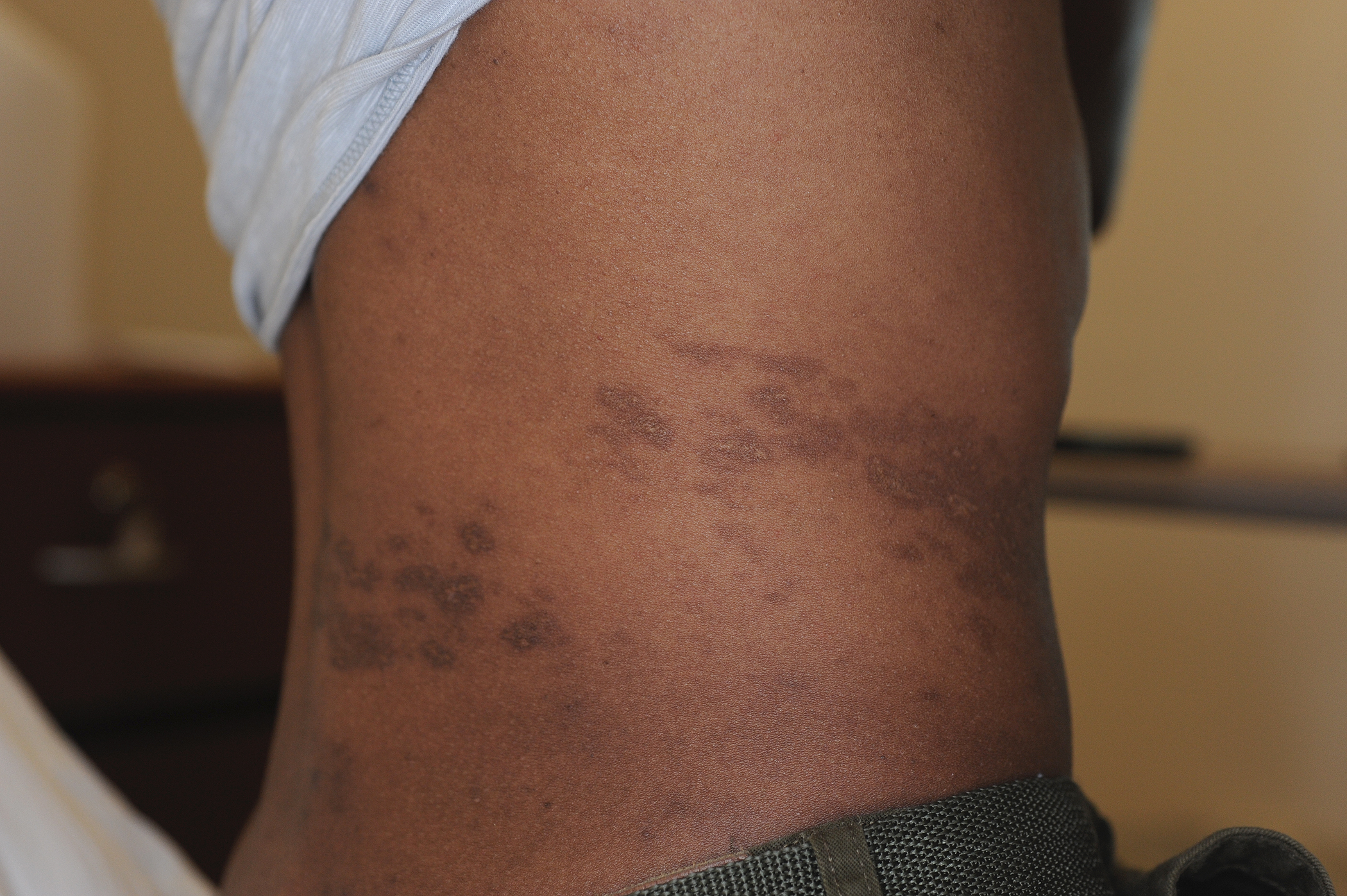 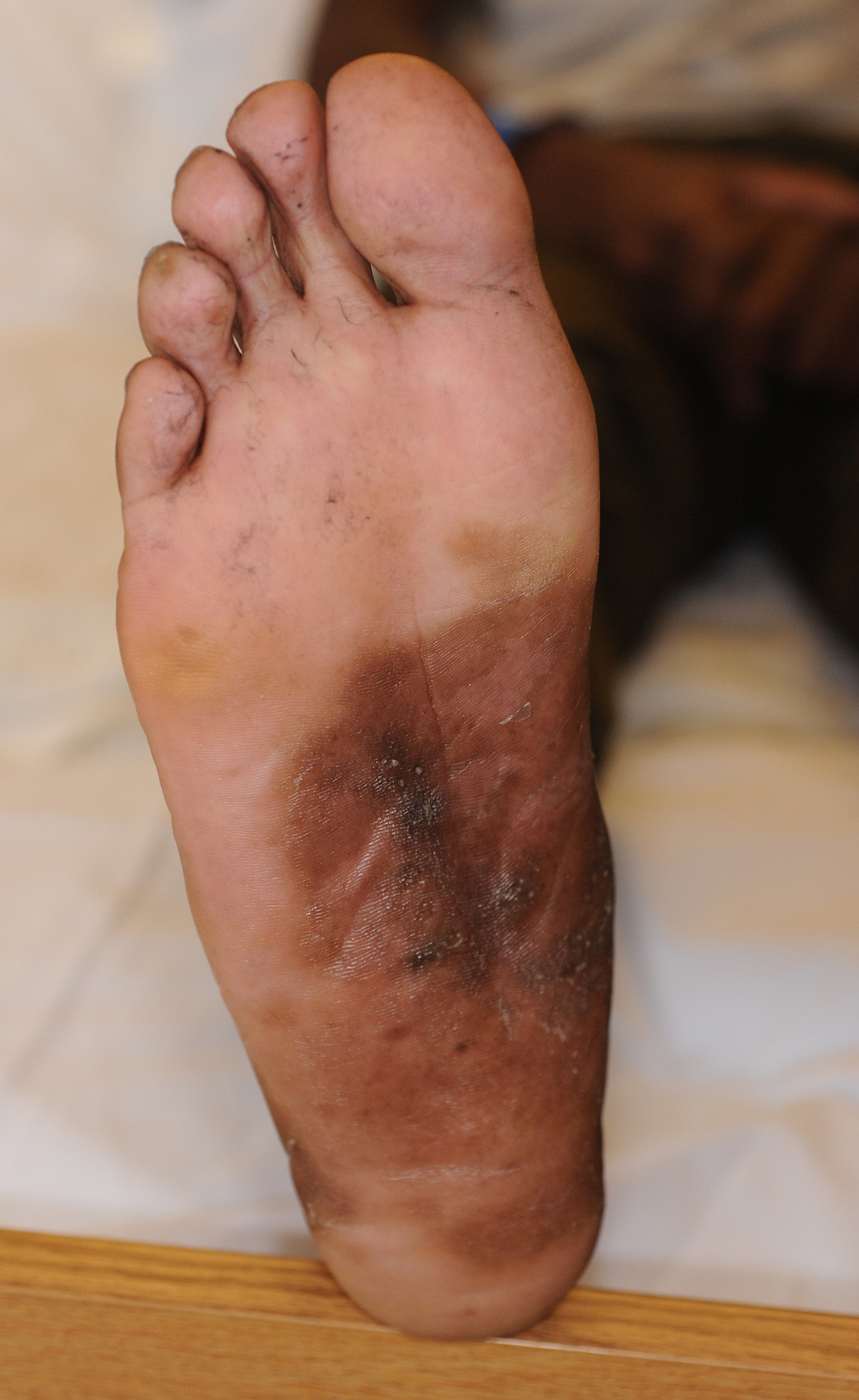 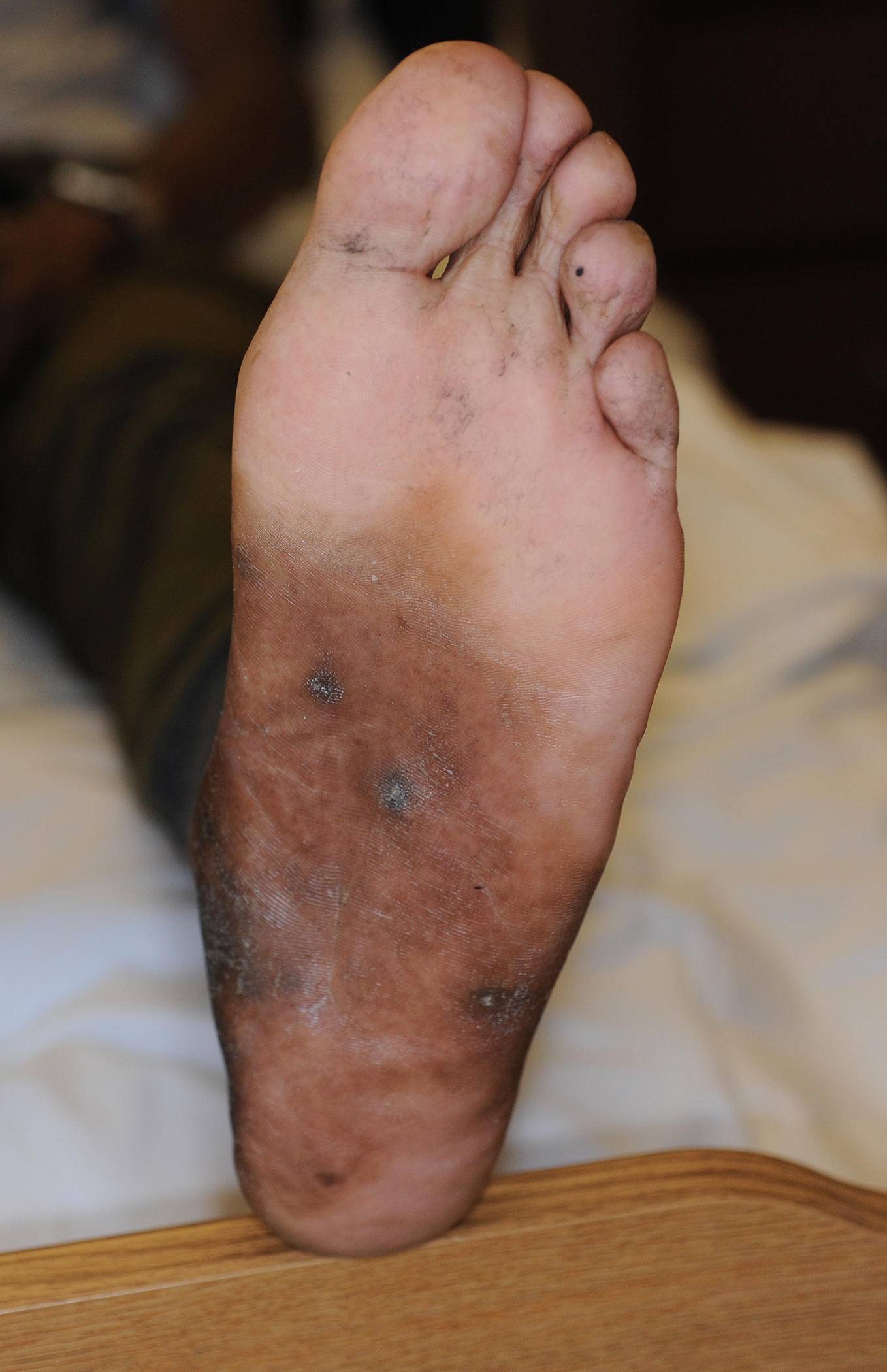 Neurological examination findings were normal, including negative Brudzinski and Kernig signs. He had no vision defects, and his neck was supple with full range of motion.

NEXT: Diagnostic Tests and Treatment

Diagnostic tests and treatment. Initial workup for the patient included basic laboratory tests and STD testing. His headache and shoulder stiffness resolved with the administration of intramuscular ketorolac and oral methocarbamol, and his vital signs improved with a saline bolus. Laboratory test results were significant for leukopenia, with an absolute lymphocyte count of 0.84 x 109/L (13.6%), a positive HIV-1 antigen and antibody result, and a reactive rapid plasma reagin test.

Computed tomography angiography scans of the head were negative for intracranial lesions, so a lumbar puncture was performed due to concern for nonbacterial meningitis as the etiology of the patient’s headache. Initial cerebrospinal fluid (CSF) analysis revealed a pleocytosis with neutrophil predominance, elevated protein, and low glucose, with additional antigen, viral, and antibody titers pending.

The patient was started on vancomycin, cefepime, ampicillin, and dexamethasone for meningitis, penicillin G for syphilis, and nystatin for oral thrush, and he was admitted to the medicine service with and infectious disease consult.

The patient’s opportunistic infections of oral thrush and herpes zoster were concerning for an immunocompromised state, made more likely by his history of unprotected intercourse and symptoms of night sweats, fatigue, and weight loss. Our initial concern was for viral meningitis given the duration of his symptoms. A consulting infectious disease specialist concluded that the patient’s presentation was consistent with secondary syphilis with syphilitic meningitis in the setting of HIV/AIDS.

Discussion. Headaches are a common presentation in the emergency department, accounting for more than 2% of visits per year in the United States. Differentiating life-threatening etiologies, such as subarachnoid hemorrhage, intracranial mass, and meningitis from benign primary headaches is essential.

Syphilis is a sexually transmitted infection caused by the bacterial spirochete Treponema pallidum. In recent years, there has been a resurgence in infection rates in high-income countries, particularly among men who have sex with men.

Infection manifests in 3 distinct stages and can involve almost any organ system, with later stages carrying greater risks for irreversible complications. One or more chancres at the site of inoculation characterizes primary syphilis and is associated with regional lymphadenopathy. Systemic dissemination of the spirochete leads to secondary syphilis, which most commonly manifests as cutaneous lesions that can be highly variable, giving syphilis its nickname, “the great imitator.” Approximately a third of patients progress to tertiary syphilis if untreated at the earlier stages, which manifests as cardiovascular system involvement (aortic regurgitation, aortic dilatation, carotid ostial stenosis), granulomatous lesions (gummas) of the skin, bones, or within organs, or late neurosyphilis, involving the brain or spinal cord resulting in paresis, dementia, or tabes dorsalis. Syphilitic meningitis is a manifestation of early neurosyphilis and may present simultaneously with symptoms of primary or secondary syphilis, as in this patient’s case.

Two positive serologic tests are required to diagnose syphilis, one treponemal and one nontreponemal, or direct visualization of the spirochete. Treatment for syphilis is penicillin, with the dose and duration dependent upon the stage of the infection.

Patients infected with HIV present a special challenge in the diagnosis and treatment of syphilis. In HIV-infected patients with a low CD4 lymphocyte count, serologic tests may be falsely negative, requiring direct visualization of the spirochete for syphilis diagnosis. Additionally, HIV coinfection may accelerate progression of syphilis to more advanced stages and result in more severe clinical outcomes. HIV coinfected patients are at higher risk for neurosyphilis, and it is recommended that HIV-positive patients who test positive for syphilis have a thorough neurological evaluation and undergo CSF testing for any signs or symptoms to suggest potential neurological involvement. Treatment of syphilis in patients with HIV infection is the same as in noninfected patients and is similarly guided by the stage of infection. However, clinical and serologic examinations are recommended at earlier and more frequent intervals than in HIV-negative patients, since treatment failure is more common in this population, especially in those with low CD4 lymphocyte counts.

Outcome of the case. The patient was discharged to a skilled nursing facility for continuation of his intravenous penicillin G infusions for syphilitic meningitis, was continued on nystatin for oral thrush, and was started on trimethoprim-sulfamethoxazole and azithromycin prophylaxis, with a plan to start highly active antiretroviral therapy (HAART) 10 days after discharge.

Eight days after discharge, however, he returned to the ED with fever and tachycardia and was admitted to the stepdown unit. Workup during that admission was negative for infection, and a history revealed that the patient had been experiencing hives and burning during his penicillin G infusions. After consultation with infectious disease specialists, it was felt the patient had developed a severe penicillin allergy. His symptoms subsided after discontinuation of his penicillin G infusions (12 days of treatment, considered appropriate for neurosyphilis), and he was discharged home.

The patient’s initial follow-up visit revealed him to be doing well; he had been taking his HAART and prophylactic antibiotics without missed doses, adverse effects, or new infections. The hyperpigmented lesions on his shins and soles, suspected to be a manifestation of secondary syphilis, had resolved. He has since moved out of state and has been lost to follow-up.