A 45-year-old woman with severe obesity presented for evaluation after having undergone abdominoplasty in the Dominican Republic approximately 8 weeks prior.

History. The abdominoplasty procedure had gone well, with 2 Jackson-Pratt (JP) drains left in situ. The drains had become clogged and were removed on postoperative day 12, although the wound was still putting out a significant amount of serosanguinous drainage. The patient eventually developed dehiscence of the entire surgical wound, which according to the medical summary from her surgeon in the Dominican Republic, was secondary to a seroma that had formed after removal of the JP drains. The medical report did not report the dimensions of the dehisced surgical wound. The seroma had been treated with bedside syringe aspiration. The patient returned to the United States 4 weeks after the surgical procedure.

Approximately 6 weeks after the procedure, the woman developed painful nodules around the surgical site that progressed to skin maceration and purulent drainage. At multiple emergency department (ED) and primary care visits, she was treated with either amoxicillin clavulanate, 875 mg twice daily, or levofloxacin, 750 mg once daily, given that she did not have systemic symptoms.

Eight weeks after surgery, another ED visit due to fever (temperature to 38.4 °C), sweats, malaise, and fatigue prompted computed tomography (CT) scans of the abdomen and pelvis with contrast, which revealed multiple anterior abdominal wall abscesses, phlegmons, and inflammatory stranding extending to both flanks, with the largest measuring 14 × 6 × 5 cm (Figure 1). 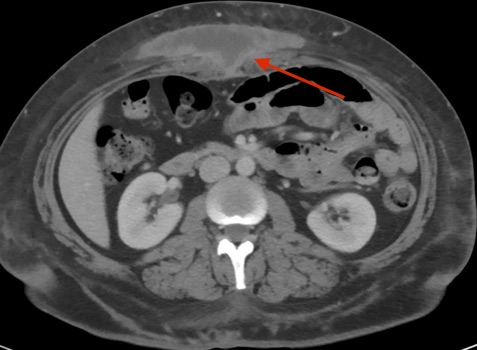 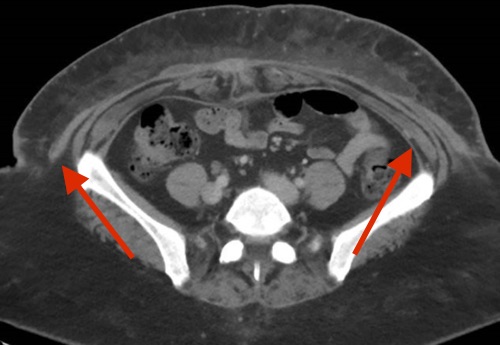 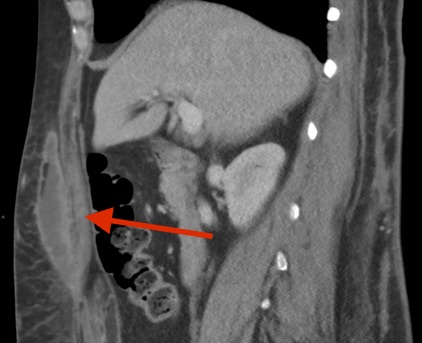 She underwent multiple surgical debridements of the tunneling necrotic cavity, which measured 45 cm long × 7 cm deep. Pending results of surgical tissue cultures and stains, she was discharged home on postoperative day 3 on ampicillin-sulbactam, 3 g every 6 hours, as well as a wound therapy vacuum and 2 JP drains (10 mm with 5 mm trocar) for 2 smaller abscesses adjacent to the cephalad and caudal ends of the main surgical wound that were not covered by the vacuum. The vacuum was in place for 7 days, according to patient.

Her medical history also included bleeding uterine fibroids, iron-deficiency anemia, and severe obesity. She had undergone gastric bypass 10 years prior and a panniculectomy 9 years prior. She had lost more than 100 kg after the gastric bypass surgery but had regained approximately 50 kg and now weighed 102 kg. Her home medications were levofloxacin, 750 mg, and acetaminophen-hydrocodone, 650 mg/10 mg. She lived with boyfriend and daughter. She did not use alcohol, tobacco, or recreational drugs, and she had no pets or recent animal exposures.

Physical examination. At the current presentation, the patient’s weight was 105 kg, temperature was 38.3 °C, blood pressure was 115/63 mm Hg, pulse rate was 100 beats/min, and respiration rate was 14 breaths/min. Abdominal examination revealed diffuse tenderness, nodular swellings, erythema, and maceration extending from the epigastrium to the suprapubic region, more pronounced at the lateral aspects of the surgical incision. Drains and dressings were soaked with copious purulent serosanguinous fluid.

Diagnostic tests. Results of a complete blood cell count and differential were normal except for a low hemoglobin level of 7.4 g/dL, which was unchanged from 4 weeks prior, for which she was undergoing outpatient workup. Results of a basic metabolic panel and liver function tests were normal. The C-reactive protein (CRP) level was 17.1 mg/L (reference range, 0-5 mg/L).

Gram stain and culture testing of surgical tissue by the Massachusetts State Public Health Laboratory identified Mycobacteria abscessus. Susceptibility tests performed at the Mycobacteria/Nocardia Research Laboratory at the University of Texas Health Science Center at Tyler (UTHSCT) revealed multidrug and inducible clarithromycin resistance due to the presence of the erythromycin ribosomal methylase gene (erm). The erm gene is an inducible macrolide-resistance gene that is expressed upon exposure of the bacteria to a macrolide. It may not be reflected in the minimum inhibitory concentration of the organism for macrolides but will render an isolate resistant to macrolides in vivo. Induction of erm occurs within 14 days of exposure to macrolides. Macrolide-based regimens are generally associated with better treatment outcomes in cases where erm is absent.1-7,12,13 The accompanying Table shows the full susceptibility panel results. 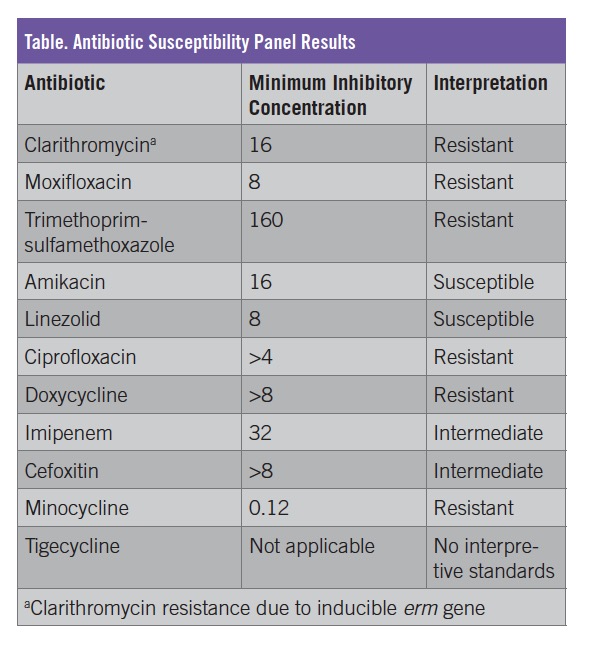 Treatment and follow-up. The patient had a complicated course. She was treated initially with amikacin, linezolid, and tigecycline based on susceptibility testing (Table). She underwent additional wound drainage with the interventional radiology team once before discharge and once after discharge. At 6 months postdischarge follow-up, the wounds had healed, the fevers had resolved, the CRP level had normalized, and abdominal imaging results showed minimal residual fluid collection in the anterior abdominal wall without fistula formation (Figure 2). 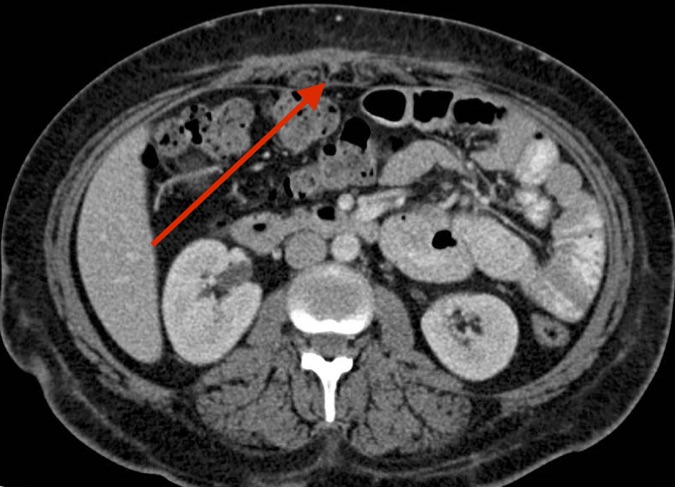 Antibiotic treatment was discontinued at this time. However, 2 months later, the abscesses recurred with formation of 2 sinus tracts at the sites of the previously placed JP drains. Additional operating room debridement and washout again yielded M abscessus on stains and cultures with an unchanged susceptibility pattern (Table). After consultation with the Mycobacteria/Nocardia research team at UTHSCT, clofazimine was added to amikacin, linezolid, and tigecycline for an additional 12 months of therapy (except for amikacin, which was stopped in month 8 because of impaired high-pitch hearing).

Discussion. Much is known and has been written in the medical literature about rapidly growing mycobacterial infections following abdominal cosmetic surgeries among medical tourists to the Dominican Republic and countries of South America.1-7 However, as this patient’s case shows, 20 years after such mycobacterial infections were first reported, awareness among clinicians remains low, leading to delayed diagnosis and inappropriate empiric treatment. Even with classic symptoms and a compatible surgical and travel history, it took 8 weeks of frequent ED and primary care visits for our patient to be diagnosed. This patient’s case also highlights the fact that treatment of these infections can be complicated and involves potentially toxic agents and aggressive surgical interventions.

RGMs, like other nontuberculous mycobacteria, are ubiquitous environmental organisms reported worldwide and most frequently detected in nonsterile water sources, including natural waters and engineered water systems.1-3,12 Health care–associated infections caused by these organisms are most often associated with breeched sterile technique and exposure to nonsterile water. Nonsterile water (or ice made from it) is a frequent source of RGM in nosocomial infections.1-3,12

Although symptoms vary and can be nonspecific, the classic ones include painful violaceous nodules that develop into persistent, discharging abscesses at surgical sites. Diagnosis is often delayed because of the indolent nature of the infections. Systemic symptoms (eg, fever) are often absent, with wound-related signs and symptoms reported more frequently than systemic signs and symptoms.1-4

Outbreaks in health care settings have been reported and include those associated with cosmetic surgical procedures. Case series have documented M abscessus wound infections in American “lipotourists” who underwent abdominoplasty in the Dominican Republic,1-7 like our patient. One report described 20 patients in 2003 and 2004, 8 of whom had matching isolates and had undergone abdominoplasty in the same Dominican facility.6 Another reported on 21 patients in 6 US states who had surgery in 1 of 5 Dominican clinics in 2013 or 2014.7

M abscessus infections are challenging to treat, because multidrug resistance necessitates prolonged intravenous therapy with potential adverse effects. For extrapulmonary disease, macrolide-based treatment regimens (for erm-negative isolates) are recommended, along with extensive surgical debridement of skin lesions and wounds as needed.3-7,13 However, expert guidelines also state that there are no drug combinations with proven efficacy.7,13 Drugs that have traditionally been used include macrolides, amikacin, cefoxitin, imipenem, tigecycline, linezolid, trimethoprim-sulfamethoxazole, and fluoroquinolones in various combinations. Given the potential toxic adverse effects of these medications (both oral and intravenous), one approach (which we used successfully) is to treat for specific durations until toxic effects just begin (such as renal/vestibular effects of amikacin, corrected QT interval prolongation by fluroquinolones, or myelosuppression by linezolid) and then switch to another drug until therapy is completed. The mean duration of therapy is 6 to 12 months along with aggressive surgical interventions. As was the case with our patient, and extrapolating from data on pulmonary disease, the major factor influencing treatment duration and recurrence is adequacy of surgical debridement (source control) with significantly more surgical patients than medical patients having culture converting and remaining negative for at least 1 year.14