In addition to a thorough history and physical examination, the gastrointestinal workup of recurrent iron-deficiency anemia should include upper and lower endoscopy; other studies could include a nuclear bleeding scan, angiography, or barium studies. Common etiologies in a younger individual include celiac disease, excess menstruation, and long-term use of aspirin or nonsteroidal anti-inflammatory drugs (NSAIDs). We report the case of a 23-year-old woman with 2 hospitalizations for anemia requiring transfusions. Workup revealed a large submucosal mass that later was found to be a gastrointestinal stromal tumor (GIST). The identification of the molecular basis of GISTs, particularly KIT, has led to a reclassification of many tumors that previously had been considered GIST.1

A 23-year-old woman with a history of anemia and dyspepsia was sent to the emergency department (ED) from the office of her primary care physician after routine laboratory study results exhibited a low hemoglobin level of 7.1 g/dL. At the time of presentation, the woman described feeling fatigued and having mild dyspnea on exertion, as well as having epigastric pain that was worse after eating. She reported having melena 3 weeks prior to presentation but no episodes since. She denied any recent NSAID use, alcohol or tobacco use, hematochezia, hematemesis, dysphagia, or menorrhagia.

The patient’s medical history was significant for iron-deficiency anemia, dyspepsia, asthma, depression, and anxiety. The patient stated that she had taken iron supplementation intermittently for “years,” in part due to nonadherence secondary to her dyspepsia. Her family history was notable for gastroesophageal reflux in her mother.

She had been admitted twice at our institution in the 7 months prior to presentation, both instances for symptomatic anemia observed on routine laboratory study results at an outpatient clinic, in addition to symptoms of fatigue, lightheadedness, and dyspnea on exertion, for which she was subsequently referred to the ED. While admitted, the patient had received transfusions of packed red blood cells (RBCs)—1 unit during the first admission and 2 units during the second—and had been discharged the next day on both occasions. She denied any history of melena during either admission, and stool guaiac tests during both admissions were negative for occult blood. Findings of an esophagogastroduodenoscopy (EGD) done 6 months prior to presentation were positive only for esophagitis. Biopsies did not reveal atrophic gastritis or celiac disease.

On admission, the patient was afebrile with a blood pressure ranging between 115/77 and 124/84 mm Hg, a heart rate between 91 and 100 beats/min, a respiratory rate of 18 breaths/min, and oxygen saturation between 99% and 100% on room air. Physical examination findings were significant for pale conjunctivas and mild epigastric tenderness without rebound, rigidity, or guarding; her abdomen was otherwise nondistended with bowel sounds auscultated. Her hemoglobin level was 6.9 g/dL with a mean corpuscular volume of 75.9 µm3 and a hematocrit of 22.4%. Her stool was brown, but a stool guaiac test was positive for occult blood. She received 1 unit of packed RBCs, leading to improvement of her hemoglobin level to 8.2 g/dL, which was stable 6 hours later. She was discharged the following day with scheduled outpatient follow-up with the gastroenterology team.

An EGD performed 2 weeks after discharge exhibited a submucosal mass in the second part of the patient’s duodenum (Figure 1). Pathology test results of the specimen displayed small fragments of spindle cell neoplasm consistent with GIST (Figure 2). 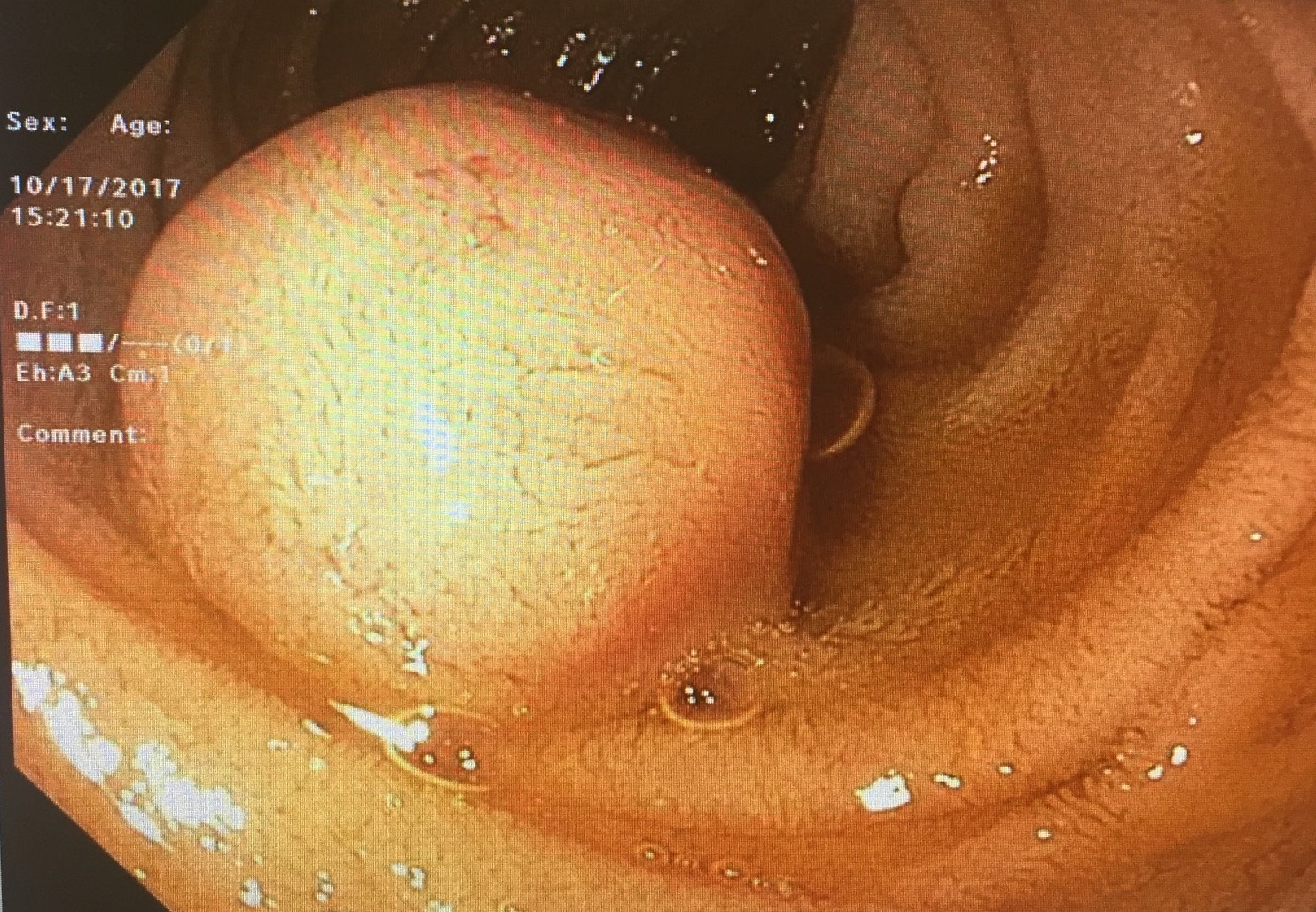 Figure 1. EGD showed a submucosal mass in the second part of the duodenum. 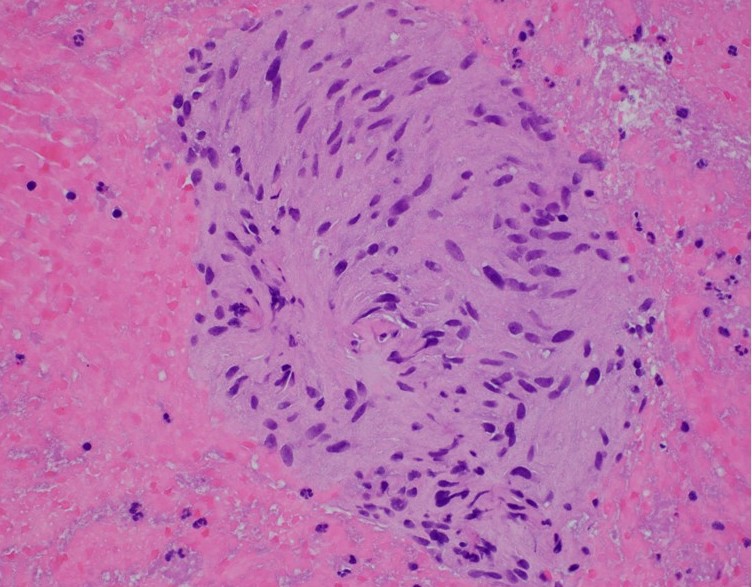 One month later, the patient underwent laparoscopic excision of the duodenal GIST via duodenojejunostomy. The resected tumor measured 1.4 × 1.2 × 0.9 cm with negative margins. The tumor was histologically low-grade, with a Ki-67 proliferation index of less than 1%. Molecular testing of the resected tumor demonstrated mutations in the KIT proto-oncogene, receptor tyrosine kinase (KIT; also known as CD117).

First, at 23 years old, our patient was significantly younger than the median age of diagnosis for GISTs. In the SEER database, only 7 cases of GISTs were diagnosed in patients aged 20 to 24 years between 2001 and 2005.4 The incidence of GISTs is believed to increase with age. One study observed that the incidence of GISTs increased from 0.01 per 100,000 for patients younger than 20 years to 2.72 per 100,000 for patients older than 80 years, with incidence peaking between 70 and 79 years and a median age at diagnosis of 64 years.4 The youngest patient observed with a diagnosis of GIST was 8 years old. Additionally, GISTs were more common in men, non-Hispanics, blacks, and Asian/Pacific Islanders, while a younger age at diagnosis, female sex, and regional disease were all factors suggestive of a better prognosis.2

Third, most adult GISTs are characterized by spindle cell histology and mutations of KIT or PDGFRA (the platelet-derived growth factor receptor alpha gene), as in our patient. Pediatric GISTs are often part of predisposition syndromes, including the Carney triad, Carney-Stratakis syndrome, and neurofibromatosis type 1.4 However, none of these syndromes exhibit the characteristic KIT mutations. KIT mutations are found in the familial GIST syndrome; however, this syndrome is still observed at an older median age of diagnosis of 46 years.4 Targeted mutation therapy with drugs such as KIT/PDGFRA tyrosine kinase inhibitors likely will improve the efficacy of cancer treatment in the future.4

It may be valuable to note that EUS-guided FNA has been proposed as the gold standard for GIST diagnosis, with a higher diagnostic yield at 68.7%, compared with endoscopy with mucosal biopsy, with a diagnostic yield of 33.8%.3 This patient’s case may support this proposal, given the fact that an additional tumor was noted on submucosal biopsy followed by EUS-guided FNA.