A 60-year-old man presented to our emergency department (ED) with a 1-week history of cough, dyspnea, and lower extremity edema. His medical history was significant for alcoholic cirrhosis, type 2 diabetes, and hypertension. At the time of presentation, he reported headache, myalgias, and neck pain that had worsened over the previous 4 days.

Physical examination. Findings were significant for dyspnea. The patient’s temperature, blood pressure, heart rate, and respiratory rate were within normal limits. Nuchal rigidity was not present, and 1+ pitting lower extremity edema was noted. The skin was mildly jaundiced. The rest of the examination was unremarkable.

In the ED, the patient had a 2-minute grand mal seizure—although he did not have a history of seizures—that had resolved after administration of intravenous lorazepam. A loading dose of levetiracetam was also given at that time. The patient was then intubated because of postictal confusion and concern for inability to protect his airway. An initial spot electroencephalography (EEG) scan had showed nonspecific diffuse attenuation, but no specific seizure activity was identified.

Diagnostic testing. Results from initial laboratory studies were notable for high-grade Streptococcus agalactiae bacteremia with growth in all culture bottles at 12 hours, leukocytosis, thrombocytopenia, acute kidney injury, and transaminitis with hyperbilirubinemia (Table). A computed tomography (CT) scan without contrast of the brain was unremarkable. A CT scan of the chest, abdomen, and pelvis did not reveal an obvious primary site of infection.

After an episode of rhythmic chewing, which raised concern for additional seizure activity, a continuous midazolam infusion at 140 mg/h was started. A lumbar puncture was performed on hospital day 1, results of which were notable for cerebrospinal fluid (CSF) with cloudy yellow appearance, a significantly elevated white blood cell count, and Streptococcus agalactiae detected by both polymerase chain reaction test and culture (Table). 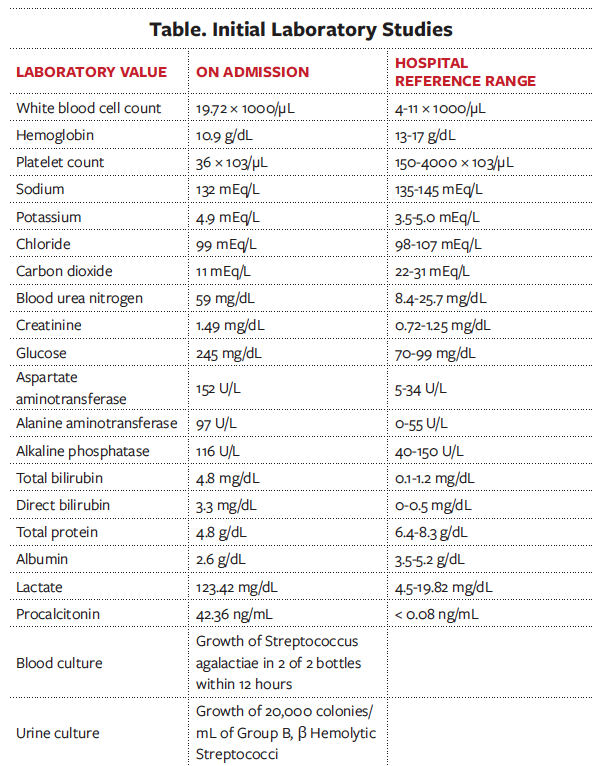 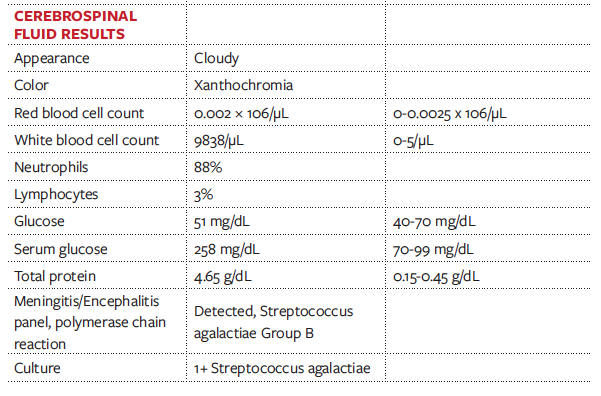 By this point, the antibiotic regimen had already been narrowed to penicillin based on culture data. Shortly after that, penicillin G, 4 million units, every 4 hours was switched to ceftriaxone, 2 g, every 12 hours because of concern for lowering seizure threshold. The patient was transferred to the neuroscience critical care unit for further management of status epilepticus and group B streptococci (GBS) meningitis.

On hospital day 3, a magnetic resonance imaging (MRI) scan of the brain revealed meningitis and cerebritis affecting the frontal, parietal, and occipital lobes. On hospital day 4, the patient had cardiopulmonary arrest that required chest compressions for 2 minutes before pulses returned. The patient subsequently required norepinephrine, vasopressin, and epinephrine.

After a discussion with his family, the patient was transitioned to comfort care and died hours later.

Discussion. GBS is an uncommon cause of meningitis in adults, with an incidence rate between 0.3% and 4.3% of all cases.1 The mortality rate is estimated as high as 34%.2 GBS is frequently found in the skin, urinary tract, lungs, and genital tract. GBS bacteremia without an identified source is a common presentation of invasive infection with this pathogen; it is common that a source is never found.3 In our patient, the primary source of infection was unclear. GBS was identified in the blood, CSF, and to a lesser degree, in the urine. While a primary central nervous system (CNS) infection is certainly possible, it is also reasonable to consider that the patient had high-grade bacteremia of unknown etiology that seeded the CNS, among other sites.

Fever, headache, and neck pain are the hallmark symptoms of meningitis. Evaluation for CNS infection was prioritized after the patient had a first-time seizure in the ED. Although the patient was afebrile upon admission, it is well known that elderly or immunocompromised individuals do not always exhibit common signs of infection. Lumbar puncture results often confirm, and are required to exclude, the diagnosis of bacterial meningitis. Metabolic, structural, and toxic etiologies were ruled out in our patient.

Seizure is an uncommon symptom of meningitis and could be attributed to direct extension, resulting in the patient’s diffuse cerebritis. Cerebral vasculitis, a known complication of bacterial meningitis, may also explain seizures. Our patient had reported having headaches and neck pain 4 days prior to admission, but without nuchal rigidity, this was originally considered to be related to a non-CNS underlying infection.

GBS meningitis most commonly occurs in patients with underlying comorbidities, which has been shown repeatedly in prior literature,1-4 and has recently been identified as an opportunistic infection. In a large prospective study of invasive GBS infections, type 2 diabetes was the most frequent underlying comorbidity, present in 31% of patients.3 Renal dysfunction (18%), liver disease (15%), and alcohol misuse (14%) were other common comorbidities, all of which were present in our patient.3 Impaired cellular immunity in immunocompromised patients increases the risk of GBS infection from skin, gastrointestinal, urinary, or genital tract colonization.4

Intravenous penicillin is the first-line treatment for GBS meningitis. Ceftriaxone can be used as an alternative, as was the case in our patient who had breakthrough seizures while taking penicillin.1 The GBS infection in our patient was susceptible to both penicillin and ceftriaxone. Treatment failure has been described in the literature in the setting of cerebritis.5 Meningitis can have direct spread and cause diffuse cerebral inflammation, as evidenced by our patient’s MRI scan. This complication may have ultimately contributed to the lack of improvement with appropriate antibiotics and the patient’s outcome.

Conclusion. Although it is most common among neonates, GBS meningitis in adults is a rare and often fatal infection. Underlying comorbidities, especially type 2 diabetes, are common among these patients, and often no clear nidus of infection is found.