A 12-month-old African American boy presented to his outpatient pediatrician after having had an episode of seizure activity the night before.

He had been born at 39 weeks of gestation to a gravida 4, para 4 mother. The mother’s medical history was unremarkable, and she had used prenatal vitamins and no other medications during pregnancy. Results of prenatal screening tests had been positive for only Group B streptococcus, but the mother had been adequately treated with penicillin prior to birth. Delivery and results of newborn screening tests had been otherwise unremarkable. At birth, weight was 3730 g, length was 50.8 cm, and head circumference was 35.5 cm.

Newborn visits and well child checkups for the first year had been well attended. The boy’s pediatrician had previously identified short stature and gross motor developmental delay, but evaluations had so far been nondiagnostic. Physical examination findings revealed no signs of malnutrition. The family history was notable for childhood seizures of unknown etiology in a maternal uncle, but not in any of his 3 older siblings; there was no family history of rickets, metabolic disorders, or endocrine disorders. The patient had been breastfeeding every few hours with additional puréed baby food as tolerated. He had not begun to eat solid foods, nor had he been taking any vitamin supplements. The mother denied any recent history of feeding intolerance, vomiting, or diarrhea.

On the evening prior to presentation, the patient had become febrile with increased fussiness, decreased oral intake, and decreased urine output. His fevers (temperature >38 °C) were being treated at home with oral acetaminophen. That night, he had had a sudden-onset generalized tonic-clonic seizure (lasting 1 minute with a postictal state of 2 minutes) before falling back asleep. The mother reported his skin to have been warm, but she did not check his temperature at that time.

The patient was brought to the outpatient clinic the following morning and was diagnosed with otitis media and a simple febrile seizure. He was prescribed amoxicillin and supportive management, but on the way home, the patient had another generalized tonic-clonic seizure (lasting a few seconds, with return to baseline by 30 minutes). He was rushed to the emergency department (ED), where laboratory tests revealed critical hypocalcemia (total calcium, 5.2 mg/dL; ionized calcium level, 2.44 mg/dL). The patient was admitted to the pediatric intensive care unit (PICU) for symptomatic hypocalcemia management.

On admission, the patient had no signs of cardiorespiratory compromise and was well-appearing and interactive. He was afebrile on arrival, and vital signs were within normal limits. Physical examination findings were notable for frontal bossing (head circumference, 47.0 cm [67th percentile]), craniotabes, enlargement of the bilateral wrists at the metacarpophalangeal joints, and mild anterior bowing of the tibias bilaterally on weight-bearing. The patient had a height of 70.5 cm (2.6 percentile) and weighed 9.2 kg (12.5 percentile). His right tympanic membrane was erythematous with bulging, and bony landmarks could not be visualized due to opacification. 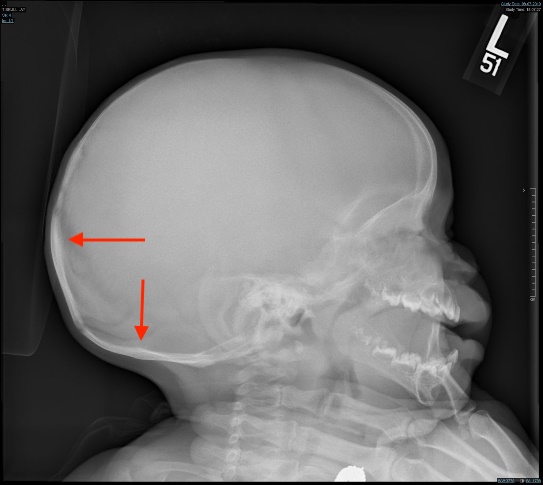 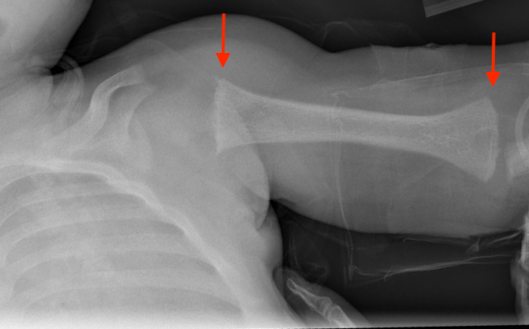 Figure 2. Radiologic skeletal survey demonstrated fraying, splaying, and cupping of the humeri at the proximal and distal ends bilaterally (arrows). There was also mild expansion of the anterior rib ends at the costochondral junction bilaterally. 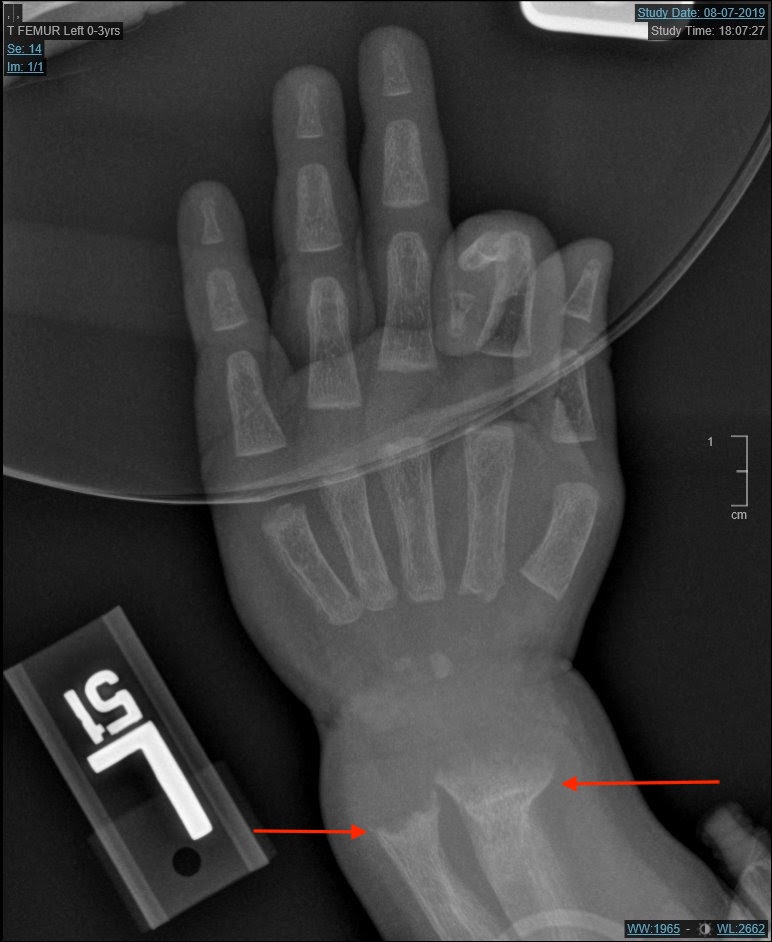 Figure 3. Radiologic skeletal survey demonstrated fraying, splaying, and cupping of the radii and ulnae at the proximal and distal ends bilaterally (arrows). 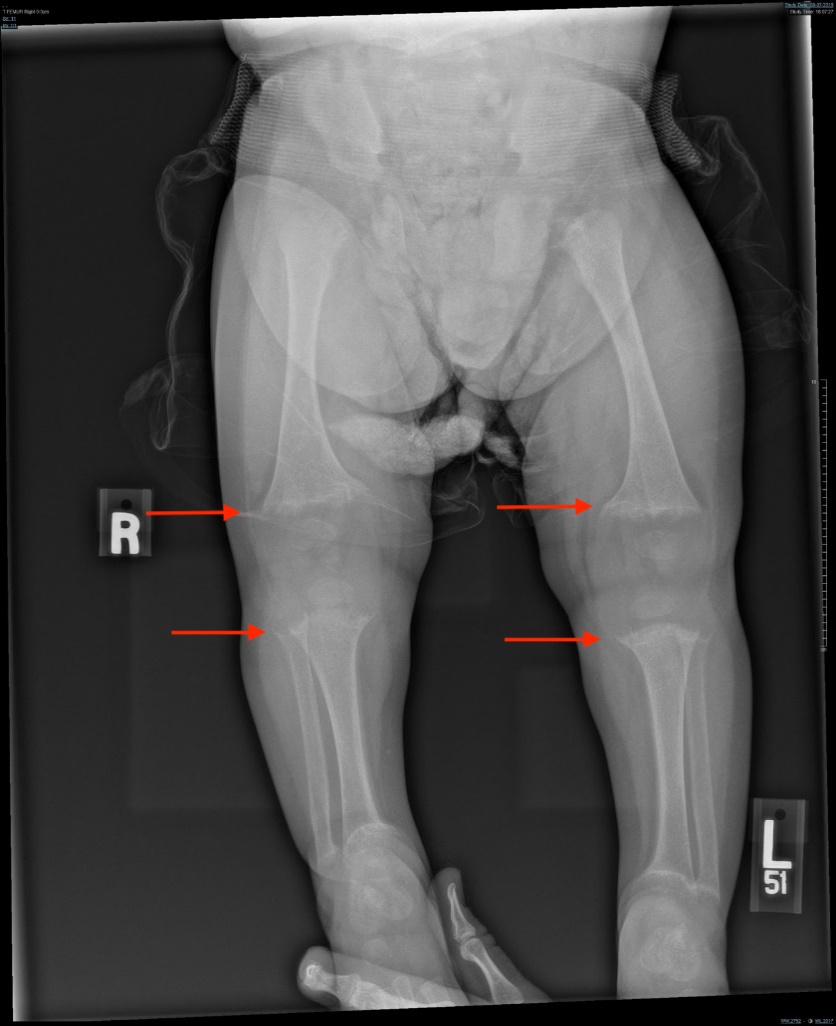 After 3 days of calcium and vitamin D repletion, there was no recurrence of seizure activity, and the ionized calcium level and the ECG changes normalized. The patient was continued on oral calcium carbonate, 75 mg/kg 4 times daily, and was discharged home with instructions for follow-up appointments with the pediatrician and a pediatric endocrinologist. His discharge diagnosis was broadened to symptomatic hypocalcemia secondary to vitamin D deficiency (rickets).

Rickets is a childhood disease in which bony mineralization dysfunction occurs secondary to hyperparathyroidism due to a deficiency of vitamin D.1 The various subtypes of rickets include drug-induced rickets, vitamin D–dependent rickets (abnormal activation of enzymes or receptors for vitamin D), and vitamin D–resistant rickets (familial or hereditary syndromes of hypophosphatemia).1 A common subtype of rickets is nutritional rickets resulting from inadequate levels of vitamin D secondary to inadequate nutritional intake. This subtype is more common in darker-skinned children (whose melanin decreases the rate of vitamin D activation from sunlight exposure), children with limited sun exposure, or exclusively breastfed infants without any vitamin supplementation.1 Regardless of the etiology, the most common presentation of such diseases is skeletal findings, including short stature or gait abnormalities, as well as developmental delays or failure to thrive.1

Pediatric seizures are the result of transient neuronal excitation, often secondary to underlying mechanisms such as fever, infections, space-occupying lesions, head trauma, or primary seizure disorders.2 Simple febrile seizures are generalized seizures preceded by a fever and lasting less than 15 minutes, with only 1 episode in a 24-hour period.3 Hospital admission is not warranted in these cases, and patients typically do not require laboratory testing; thus, they can be seen and discharged on an outpatient basis. If there is evidence of an infectious source, such as otitis media, then the febrile illness should be treated.4 The distinction between febrile and nonfebrile seizures is only necessary if the seizure recurs (as with this patient), in which case further evaluation is called for.

The initial presentation of rickets as hypocalcemic seizures in the setting of a febrile illness is quite rare and therefore can present a diagnostic challenge. A similar 2019 case report discussed an 11-month-old African American girl who had been diagnosed with simple febrile seizures secondary to a viral upper respiratory infection but instead was found later to have low calcium and vitamin D levels; however, she was notably without any significant skeletal abnormalities on physical examination.5

Another similar case report published in 2002 described a 13-month-old African American boy who presented for evaluation of recurrent febrile seizures in the setting of pharyngitis and a history of neonatal pneumonia.6 For that patient, the physical examination findings were unremarkable other than mild wrist widening and leg bowing, but laboratory studies revealed low calcium and vitamin D levels. The diagnosis of rickets was confirmed when radiographic studies demonstrated enlarged costochondral junctions and cupping and fraying of the distal metaphysis.

A 2011 retrospective case review found that 20% of seizures in rickets met the diagnostic clinical criteria for simple febrile seizures, which normally do not require further workup, hence making the underlying propensity for seizures in hypocalcemic rickets patients easy to overlook.7

Secondary prevention involves targeting high-risk groups, including African Americans, exclusively breastfed infants, children with low intake of dairy products, and infants in northern areas where colder weather precludes outdoor activities.9 Parental education is critical to the success preventing vitamin D deficiency. Meanwhile, in the ED, a pediatric patient presenting with hypocalcemic seizures requires providers to first assess the airway, breathing, and circulation before transferring the patient to the PICU. In the PICU, prompt repletion with calcium gluconate, initiation of vitamin D supplementation, and cardiopulmonary monitoring are the initial focus. Following appropriate stabilization, a diagnostic workup in collaboration with a pediatric endocrinologist is likewise important.1

In this patient’s case, the febrile nature of otitis media confounded the assessment of his condition. Based on the description given by the parent, this patient met the criteria for a simple febrile seizure.

While the initial presentation of rickets presenting as hypocalcemic seizures in the setting of a febrile illness is quite rare, previously reported cases suggest that such presentations warrant basic laboratory evaluation, even if an infectious source is thought to be the initiating factor. Furthermore, this case highlights that a higher clinical suspicion for rickets is warranted in darker-skinned children.1 Therefore, African American patients may also require a thorough physical examination, including assessment of neurological function, growth parameters, developmental milestones, and the integumentary system.

In this patient’s case, a full physical examination in an outpatient setting likely would have revealed several bony abnormalities that would have further increased the index of suspicion for an underlying metabolic and endocrine disorder. Furthermore, a delay in gross motor skill development and short stature should prompt the evaluation of vitamin D levels, since these are common findings in vitamin D deficiency in childhood.1