An 11-year-old girl presented to the emergency department with a 2-week history of nausea and vomiting in the context of chronic abdominal pain, diarrhea, and unintentional weight loss. Her parents reported that the girl had experienced one to two episodes of postprandial abdominal pain and vomiting multiple times a week, as well as three to four loose, nonbloody stools per day. She had lost 9 kg over the previous year, and an earlier workup by her primary care provider had been notable for anemia (hemoglobin, 7.6 g/dL) and heme-positive stools.

History. The patient had a history of autism, developmental delay, and one previous hospital admission for dehydration as a young child. Family history was notable for ulcerative colitis in a third-degree relative.

Diagnostic tests. A complete blood cell count showed a persistent moderate microcytic anemia with no leukocytosis or thrombocytosis. The sedimentation rate was elevated at 64 mm/h. Out of concern for new-onset inflammatory bowel disease, she was admitted. Given the history of vomiting and concern for stricture, an upper gastrointestinal contrast study was obtained, the results of which were notable a large filling defect extending from the stomach through the pylorus to the proximal jejunum, with features suggestive of a large trichobezoar (Figure 1). 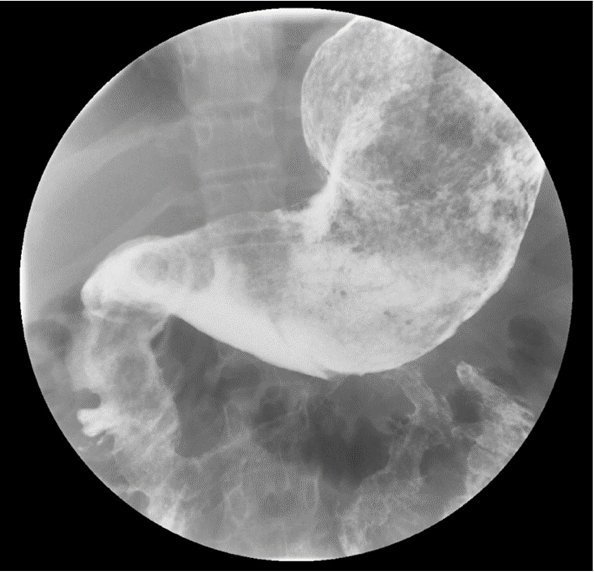 On further questioning, the patient readily admitted to eating her own hair, and her parents recalled that years prior, she had been evaluated for alopecia of unknown etiology. She was presumptively diagnosed with trichobezoar. She underwent exploratory laparotomy and removal via gastrostomy of a large gastric trichobezoar measuring 18 × 9 × 8 cm, with a 45-cm tail, and weighing 820 g (Figures 2 and 3). She simultaneously underwent colonoscopy; results of biopsies were normal.

Figure 2. Extraction of the trichobezoar via open laparotomy and gastrotomy. 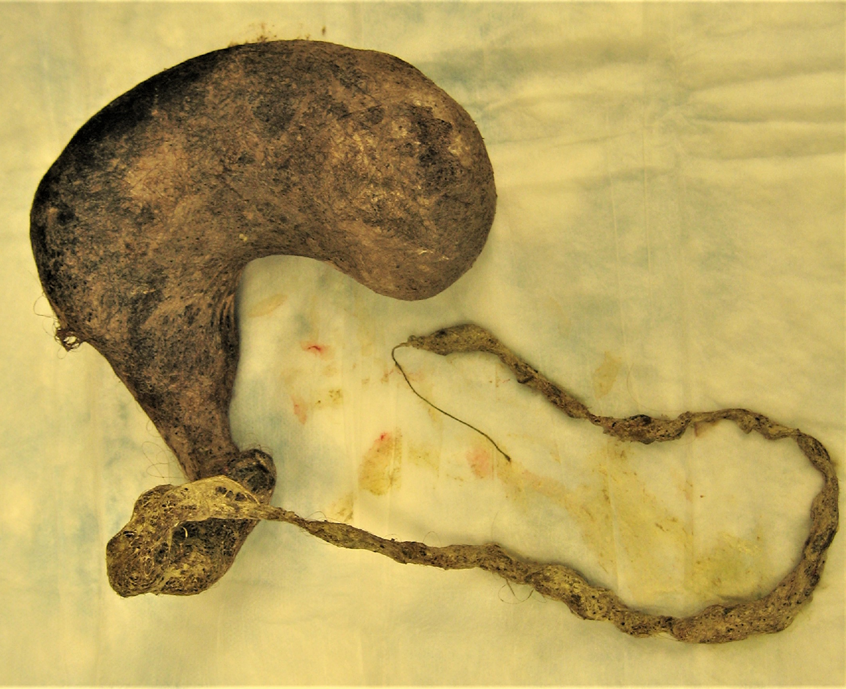 Discussion. The word bezoar is thought to be a translation of the Arabic gadzehr or the Persian padzahr, meaning “antidote,” since historically the bezoars of domesticated animals were thought to have medicinal value in many cultures.1 There had been very few reports of bezoar-associated disease in humans until DeBakey and Ochsner’s cardinal report of approximately 300 cases in 1939.2

In general, bezoars are intragastric concretions composed of food or foreign material that can be classified by their primary constituent such as plant material (phytobezoar) or hair (trichobezoar).1,2 First described by Vaughan and colleagues in 1968,3 Rapunzel syndrome is a rare but increasingly recognized complication of trichobezoar that is characterized by a long tail of hair extending from the stomach to the small bowel.3

Trichobezoars occur primarily in children and adolescents with normal gastric function and motility compared with phytobezoars, which are more common in adults, especially in patients with a history of gastric surgery.2,4 Common comorbid conditions include psychiatric disorders, pica, trichotillomania, and trichophagia.5-7 Perhaps owing to a combination of the female predominance of trichotillomania and longer hair that is prone to entrapment, there is a strong female predominance of trichobezoar and Rapunzel syndrome, ranging from 91% to 96%.2,7,8 The typical age of presentation is 11 to 12 years.6,8

Trichobezoars are presumed to form via retention of ingested hair in the gastric rugae. As more hair is ingested over time, peristaltic contractions compact the hair into a ball that becomes too large to leave the stomach. The effect of gastric secretions give the bezoar its characteristic black and glistening appearance: The acidity denatures hair proteins, while mucous adheres to the bezoar surface.6 Eventually, the trichobezoar grows to form a cast of the stomach; when it extends through the pylorus into the small bowel to the level of the ileocecal valve, it is termed Rapunzel syndrome.3,6

The slow growth of trichobezoars over time parallels the insidious onset of symptoms evolving from vague to catastrophic. Less dramatic symptoms include epigastric pain, early satiety, weight loss, and chronic anemia and hypoalbuminemia.2,6,8 Trichobezoars also can present with intermittent or acute vomiting and severe pain the context of gastric-outlet or small-bowel obstruction, appendicitis, or intussusception.5,6,9 Furthermore, cases associated with malnutrition, steatorrhea, protein-losing enteropathy, and Ménétrier disease have been reported.10-12 Due to life-threatening complications such as hemorrhage and bowel perforation, trichobezoars have the highest mortality rate of all bezoars—up to 30% of complicated cases.2,4 In addition, cases of Rapunzel syndrome can present with postpyloric obstruction such as biliary obstruction and pancreatitis.13,14

The diagnosis of trichobezoar is often made by way of history, physical examination, and radiographic studies, although a high index of suspicion is warranted. Physical examination findings may include a palpable epigastric abdominal mass that is indentable; this is known as the Lamerton sign.15 Occasionally, alopecia circumscripta may also be present.7 Interestingly, most of the patients reported in the literature denied a history of trichotillomania or trichophagia.5,6 Plain films may reveal a mass with an amorphous appearance with variable consistency, containing both gas and solids, whereas contrast studies including both upper gastrointestinal series and computed tomography scans provide a higher level of detail.4,16

Although challenging and risky, it is possible to diagnose and remove trichobezoars via endoscopy if they are singular and small.4 While cases of successful laparoscopic removal have been reported, surgical removal via laparotomy remains the therapy of choice for large trichobezoars with extensions into the small bowel such as in Rapunzel syndrome.8,16,17 There are no reported cases of successful medical or expectant management, and even after complete surgical resection, recurrence occurs in a minority of patients.6,8

Outcome of the case. This patient’s initial presentation with chronic abdominal pain, weight loss, and elevated inflammatory markers was concerning for possible inflammatory bowel disease, but she ultimately received a diagnosis of Rapunzel syndrome. She recovered from her surgery and was referred to a psychiatrist. After the diagnosis was made, the family commented that the patient had been seen at an outside institution several years prior for alopecia, although no one had ever seen her pull or eat her own hair. At her initial evaluation, there were no physical examination findings to suggest hair ingestion such as alopecia or broken, irregular hair. While the differential diagnosis for her chief concern of abdominal pain and weight loss is certainly broad, Rapunzel syndrome was not initially in the differential diagnosis. This case illustrates the need to consider gastric bezoar in cases with similar presentations.