An 83-year-old morbidly obese (body mass index, 33.55 kg/m2) woman presented to the emergency department with progressively worsening atraumatic right hip pain for the past week that had made her unable to walk. She had been previously ambulatory with a cane but has since been bedbound. She described the pain as sharp and associated with movement but relieved by lying supine. She denied numbness or paresthesia to her lower extremities, constipation, or urinary incontinence. 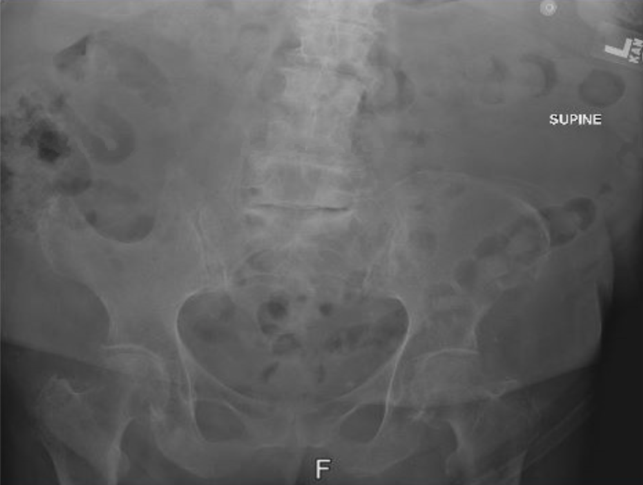 The patient was referred to a tertiary care center for plastics and orthopedic reconstruction surgery.

Discussion. Bone grafts are essential to achieving a solid spinal fusion by encouraging osteoblastic activity and providing a scaffold to guide bone remodeling. The iliac crest in particular is a common site for autologous bone grafting and is still considered the gold standard due to its ease of access to cortical and cancellous bone.1 Nevertheless, ICBG can be associated with significant morbidity, especially when full-thickness tricortical grafts are harvested. Common complications include donor-site pain, hematoma, thigh dysesthesias, pelvic instability, and fracture.2 Gastrointestinal tract herniation, on the other hand, is a much rarer complication with an occurrence rate of 5% to 9%.3,4

Lumbar hernias are rare, with only approximately 300 reported cases in the literature worldwide.5 A small portion of these hernias are postsurgical complications, such as after ICBG for the repair of bone defects in spinal surgery or trauma and the treatment of malunions, nonunions, and tumors. Full-thickness tricortical ICBG involves incising the periosteum to release all layers of the abdominal wall muscles from their insertion point on the iliac crest; an oscillating saw can then be used to harvest the graft. This creates a large defect in the iliac crest, augmenting the risk for herniation of gastrointestinal tract contents through the weakened abdominal wall.6 The hernia can manifest as early as 3 weeks after surgery to 30 years postoperatively.4

A minor complication of ICBG involves postsurgical pain at the harvest site. This is the most frequently reported complication, although reported rates are highly dependent on study design and population.8 Abdominal wall hernia, however, is a more concerning complication due to the risk of intestinal obstruction, incarceration, and strangulation. Abdominal contents may protrude through the inferior triangle of Petit, which consist of the latissimus dorsi medially, the external oblique laterally, and the iliac crest inferiorly. Typical clinical features are a semispherical soft bulge that worsens with increased abdominal pressure and that may disappear when lying down.9 A patient with an incarcerated transiliac hernia from coughing due to chronic obstructive pulmonary disease exacerbation had been described.10 Patients may present with varying degrees of pain and discomfort, as well as vomiting, constipation, and obstipation.4

Although cases of herniation through an iliac defect caused by ICBG have been reported, no reported cases of ambulatory dysfunction as the primary presenting symptom currently exist in the literature. Our concerns for an occult fracture prompted pelvic radiography, the results of which demonstrated a large iliac crest defect. Given our patient’s physical examination findings in conjunction with this large bony defect on radiographs, an abdominal and pelvic CT scans were obtained to further delineate the primary pathology and confirm the diagnosis. CT was essential in characterizing the extent, location, and contents of the hernia, which can help surgeons appropriately manage the disease and plan a course of action in the operating room. More importantly, it can assist in excluding incarceration, which occurs in 25% of cases, and strangulation, which occurs in 10% of cases.11 Ultrasonography, while safe and inexpensive, has limited ability to exclude other concomitant conditions, and its diagnostic accuracy is hampered by obesity.12

Nodarian and colleagues even described a case of liver herniation through the bone defect caused by ICBG.13 Management of transiliac abdominal hernias is similar to other hernias and involves primary surgical repair with or without mesh support. Complications of ICBG are probably more prevalent than reported in the literature and are likely underestimated. The diagnosis may be more difficult in obese patients, and patients may present with vague symptoms such as nausea, vomiting, abdominal discomfort, difficulty ambulating, and pain at the surgical incision site. Therefore, a high index of suspicion for graft-site herniation is necessary for patients with history of autologous ICBG.