A 31-year-old man presented to the emergency department (ED) with a chief concern of fevers and diarrhea for 3 weeks.

History. The patient had had multiple ED visits for diarrhea in the month prior to presentation. Routine stool culture results from these visits had been negative for pathogens. He had been prescribed a course of ciprofloxacin and metronidazole after a computed tomography (CT) scan of the abdomen showed findings consistent with colitis. Despite this treatment, he developed fevers, vomiting, and near-syncopal episodes, which prompted him to return to the ED.

On presentation, the patient reported having occasional palpitations, difficulty breathing, and night sweats. He reported being bedbound for several days secondary to malaise and pain in his left lower extremity. The patient had no pertinent medical history. His social history was significant for sexual activity with men and women. He had no history of recent travel, toxic exposures, or changes to his diet. He denied tobacco or alcohol use, but did report occasional cocaine use, with last use 1 year prior. He works as a landscaper. He was not taking any medications, nor did he have any allergies. His family history was significant only for a heart murmur in a maternal grandmother.

Physical examination. On presentation, the patient was septic, with tachycardia and tachypnea. He had dry oral mucosa, with brisk capillary refill. Cardiac examination findings were unremarkable, without murmurs, and the respiratory examination revealed clear lungs bilaterally and no obvious difficulty breathing initially; however, he later developed mild increased work of breathing. Abdominal examination revealed normoactive bowel sounds and a soft, nontender abdomen with no organomegaly. Rectal examination findings were unremarkable and showed no signs of hemorrhoids or bleeding. Examination of the extremities revealed equal pulses bilaterally, with trace edema and a positive Homans sign on the left, indicating possible deep vein thrombosis (DVT). Findings of a neurological examination were entirely benign. No rashes were noted on skin examination, and no lymphadenopathy was present.

A stool sample was negative for Entamoeba histolytica, rotavirus, Giardia, and microsporidia antigens, as well as negative for Clostridioides difficile antibodies. Blood and urine cultures from admissions had no growth of pathogens. Findings of a chest radiograph were unremarkable. Doppler ultrasonography of the left lower extremity was obtained, given the patient’s report of pain; findings were consistent with venous thrombosis of the left popliteal and calf veins. Subsequent CT angiography (CTA) of the chest revealed extensive pulmonary emboli (PE) with a large filling defect in the left main pulmonary artery, as well as a small mass in the right lung base (Figure 1). 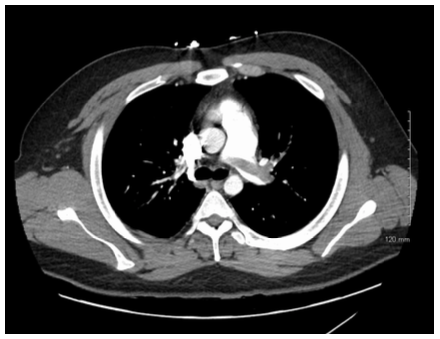 Diagnosis. The initial differential diagnosis for the patient’s sepsis in the setting of gastrointestinal tract complaints included viral and parasitic etiologies. Bacterial infection was less likely, given the failure of symptoms to respond to antibiotics, a lack of leukocytosis, and negative culture results from prior evaluations. Initial etiologies considered for his PE and DVT included malignancy, a hematologic disorder, and, less likely, a sedentary lifestyle.

The results of a thrombophilia panel were positive for lupus anticoagulants and high titers of anticardiolipin-antiphospholipid antibodies, consistent with antiphospholipid antibody syndrome, which is a possible etiology of the PE; however, the titers could have been falsely elevated in the setting of infection.

Treatment and outcome. Aggressive intravenous hydration and broad-spectrum antibiotics were started, and the patient’s sepsis resolved, with normalization of the lactate level. Antibiotics were discontinued after identification of CMV as the likely cause of colitis. An aggressive heparin drip was started for the PE, and on the second hospital day, tissue plasminogen activator (tPA) was administered at 2 mg/h via 2 catheters for 2 hours.

The patient tolerated the tPA without issue; however, he continued to be tachypneic and had additional fevers, with negative cultures. Symptoms were attributed to the burden of the thrombus. As such, the patient was transferred to an outside hospital for further evaluation and ultimately underwent an extensive thrombectomy to remove the PE (Figure 2). There were no complications with the procedure. 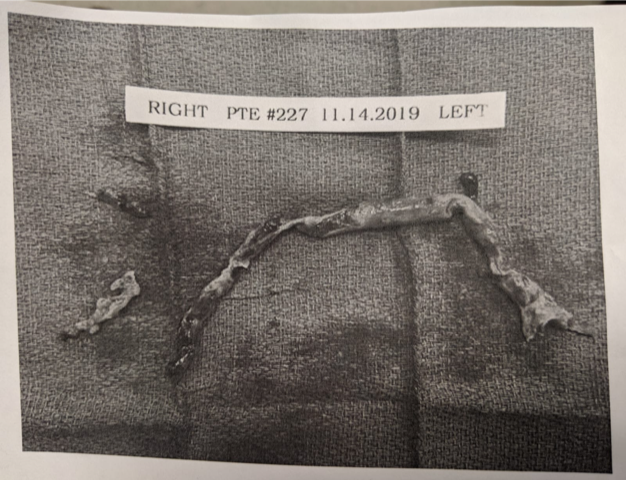 Figure 2. Embolus removed from the patient during thrombectomy.

Afterwards, he was bridged to warfarin for anticoagulation, and he was initiated on valacyclovir for CMV treatment and bictegravir, emtricitabine, and tenofovir alafenamide for HIV treatment. His condition was stabilized, and he was able to be discharged.

He has since had 2 consecutive negative CMV PCR tests, and his gastrointestinal tract symptoms have resolved, and so valacyclovir has been discontinued. Since discharge, he has been following up with an HIV clinic, and his viral load is now undetectable.

In the United States, more than half the population older than 40 years of age have been infected with CMV without ever having symptoms.1,2 Vascular complications including PE are rare manifestations of CMV infection.3 Patients who are immunocompromised, such as those with HIV infection, have an additional increased risk of embolism. HIV disease is recognized as a prothrombotic condition, with an annual incidence of venous thromboembolism of approximately 0.20% to 7.6%.4 Underlying contributing factors may exist in both CMV-positive and HIV-positive patients, including antiphospholipid antibodies (as in our patient), heterozygous factor V Leiden mutation, heterozygous prothrombin gene mutation, and protein C and/or protein S deficiency.4,5 One theory is that HIV infection makes a person more prone to infections such as with CMV, which cause intestinal damage, activating inflammatory markers, and thereby leading to endothelial dysfunction. This limits the antithrombotic potential of the venous wall, ultimately increasing the risk of thromboembolism.4,6

Therapeutic options include treatment of CMV with antiviral agents, management of HIV with highly active antiretroviral medications, and treatment for PE with lifelong anticoagulation. In more extensive cases of PE, thrombectomy may be required, such as in our patient’s case. Survival rates are decreased in patients who are male, who are of advanced age, or who are immunocompromised.7 Patients such as ours require close follow-up in order to optimize outcomes, since there is an 8% to 15% chance of recurrence of thromboembolism in patients with HIV infection.4