A 1-month-old boy was referred because of asymmetry of the lower extremities, with the left lower extremity larger than the right. The size discrepancy had been first noted at birth. The boy had been born to a healthy 27-year-old primiparous mother at term following an uncomplicated pregnancy and normal vaginal delivery. His birth weight was 3.5 kg, length was 52.5 cm, and head circumference was 35.7 cm. The neonatal course had been uneventful. He was being breastfed and was thriving. The parents were nonconsanguineous, and the family history was negative for asymmetry of body parts or other congenital abnormalities. 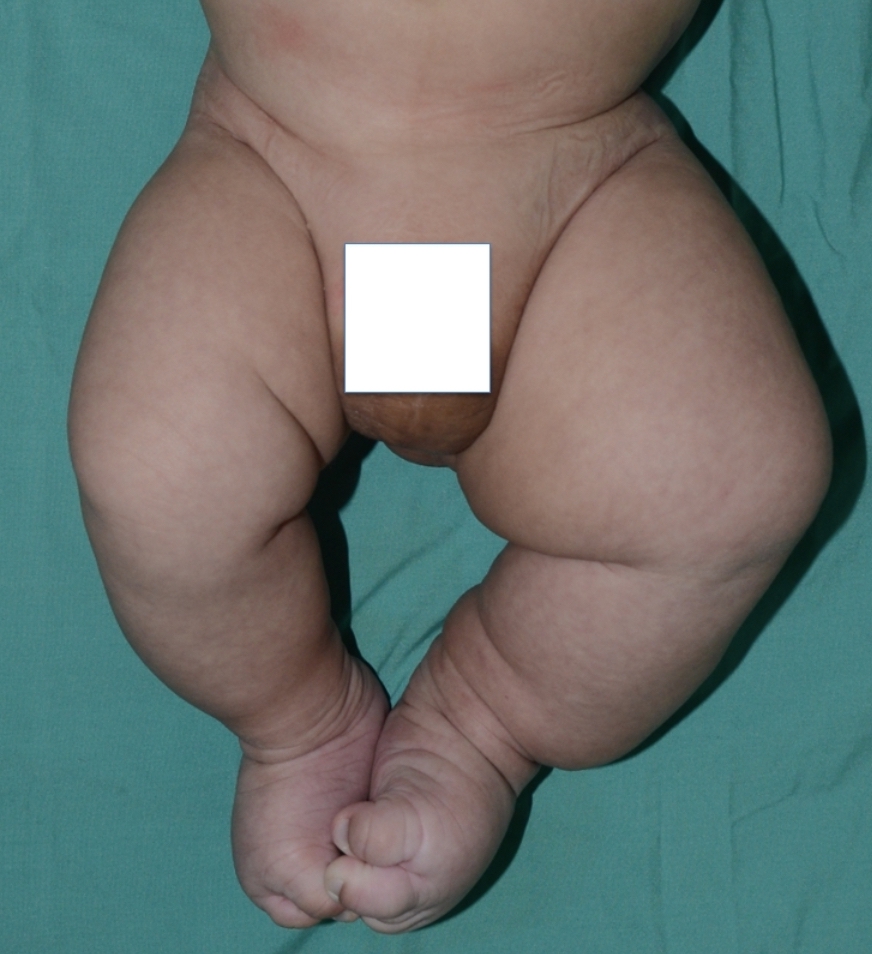 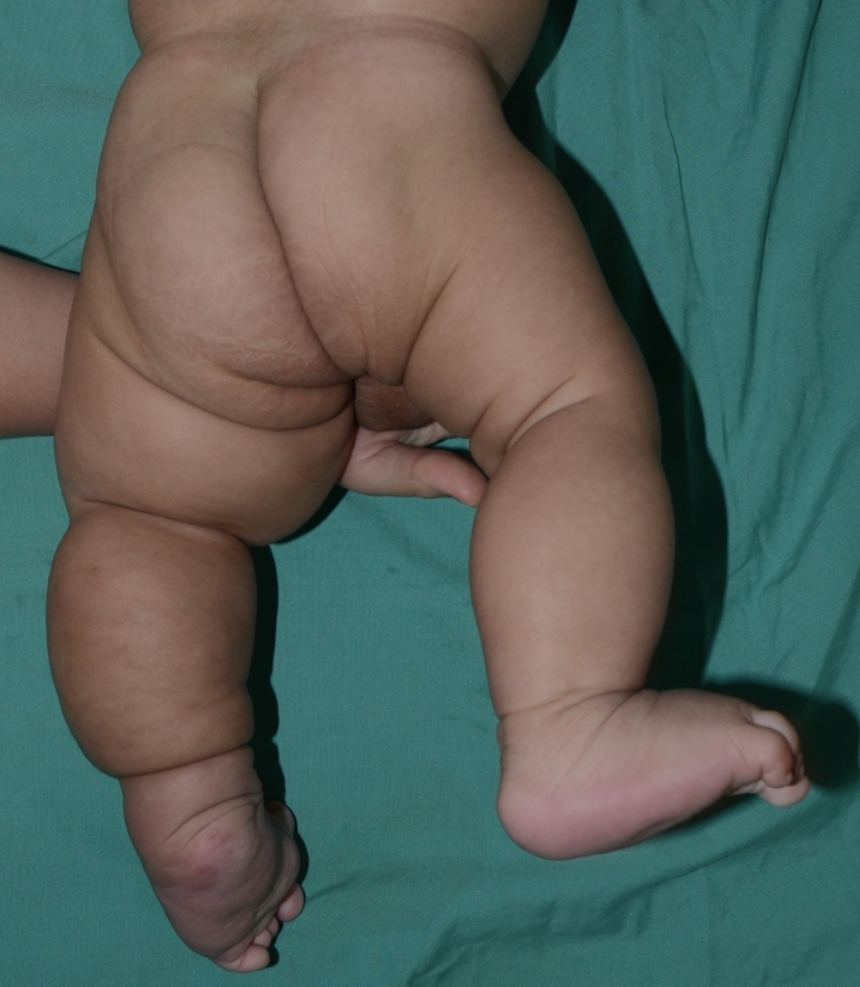 Beauty depends on size as well as symmetry.

Hemihyperplasia, also known as hemihypertrophy, is an asymmetric overgrowth of one or more body parts that is more pronounced than what can be accounted for by normal physiologic variation (arbitrarily defined as <5%) and that cannot be attributed to hemiatrophy of the contralateral part.1,2 The discrepancy in size can be seen in the circumference or length of the affected part, or both.1 Hemihyperplasia can occur in isolation or in association with other congenital anomalies or be part of a syndrome.3,4 Patients may also have associated asymmetry in the size of internal organs.5 Given that hemihyperplasia results from an overgrowth of cells rather than an increase in individual cell size, the term hemihyperplasia is more accurately descriptive and preferred.2,5,6 Hemihyperplasia can been classified as simple (segmental) or complex.6,7 Whereas simple hemihyperplasia involves a single limb, complex hemihyperplasia involves half of the body including at least one arm and one leg.8 Involvement of one side of the face is referred to as hemifacial hyperplasia.1,9

Estimates of the incidence of hemihyperplasia vary from 1 in 13,000 to 1 in 86,000 live births.3,8 The true incidence is difficult to determine, because isolated hemihyperplasia can be very subtle and may not be diagnosed on routine physical examinations, especially at birth. A recent international multicenter prospective study involving 10,066 apparently healthy individuals aged 15 to 18 years showed an incidence of 1 in 5000.10 This is not surprising in view of numerous case reports of patients with hemihyperplasia first referred to their pediatricians between 10 and 18 years of age.11 The condition is more commonly seen in girls.1 The right side of the body is more commonly affected.1

The exact cause of hemihyperplasia is not known. In the isolated form, the cause is usually idiopathic and sporadic.7 However, in some patients with hemihyperplasia, an imprinting defect of genes on 11p15.5, loss of maternal methylation of KCNQ1OT1, or hypermethylation of maternal H19 may be causes.12-14 These same genes are involved in the development of Beckwith-Wiedemann syndrome and Wilms tumor.13,14 Abnormal imprinting may lead to the overexpression of paternal growth-promoting genes or the underexpression of maternal growth-inhibitory genes.6,12 This may result in hyperplasia and increased tumor risk.12 A familial occurrence of hemihyperplasia has been described.3 Some of the reported cases had an autosomal dominant mode of inheritance.8 Other causes of hemihyperplasia include chronic hyperemia (eg, arteriovenous fistula, chronic arthritis, chronic synovitis, chronic osteitis), plexiform neurofibroma, giant hemangioma, lymphangiomatosis, lymphedema, lipomatosis, and bone dysplasia.6

A thorough history and physical examination must be performed to document the asymmetric growth of the body parts and to determine whether a child’s hemihyperplasia is truly isolated or whether it is associated with an underlying abnormality or syndrome.

Complications depend on the underlying cause of the hemihyperplasia and whether the hemihyperplasia is associated with a distinct clinical syndrome. The most significant comorbidity to consider is the development of malignancies.26 In a prospective multicenter study of 168 children with isolated hemihyperplasia, 10 tumors developed in 9 patients over a 10-year period for an estimated incidence of 5.9%.8 In another study of 24 patients with isolated hemihyperplasia, one patient (4.2%) developed Wilms tumor during a 15-year follow-up.27 The incidence of tumors in syndromic hemihyperplasia is considerably higher, up to 10% in one study.28 Malignancies associated with hemihyperplasia include Wilms tumor, hepatoblastoma, adrenal carcinoma, renal cell carcinoma, neuroblastoma, pheochromocytoma, mesenchymoma, leiomyosarcoma of the small bowel, hemangioendothelioma, breast carcinoma, and rhabdomyosarcoma.6,8,29-31 Tumor risk is greatest in the first decade of life; thereafter, it declines to about the same risk as in the general population.12 The average age at the time of tumor detection was 36 months; approximately 95% of the tumors were located in the abdomen.8 Extra-abdominal tumors rarely occur but have been reported in the brain, testis, lung, uterus, breast, and bone marrow.26

Hemihyperplasia of a lower limb can lead to leg-length discrepancy and result in pain, limping, and early degenerative bony changes, as well as cosmetic problems and difficulty in fitting clothing and footwear.6,21 Carpal tunnel syndrome may result if the hemihyperplasia involves an upper limb.32,33

Treatment of hemihyperplasia is symptomatic and can include orthotics and braces. In severe cases, orthopedic surgical intervention may be warranted. Psychosocial support for the child may be considered, because hemihyperplasia can be associated with poor self-esteem and psychological stress.6,22

Continued screening for potential tumors is also an important part of management. Although screening recommendations vary, all focus on early detection of abdominal tumors, because these are most frequently associated with hemihyperplasia.6 Screening can include physical examinations and measurement for elevation of serum α-fetoprotein, serum chorionic gonadotropin, and urinary catecholamines (vanillylmandelic acid and homovanillic acid) every 3 to 4 months until 4 years of age.1,26 Some authors recommend measurement of serum α-fetoprotein as frequently as every 6 weeks until 4 years of age.12 Given that most of the malignancies arise in the abdomen, it has been suggested that abdominal ultrasonography be performed every 3 to 6 months until age 8 years,2,12,34 and that clinical surveillance for other tumors be considered.35 A complete blood cell count and chest radiography every 12 months until age 10 years also have been recommended.25 It is recommended that a complete physical examination be performed at least once every 6 months until growth has been completed.1,2