An otherwise healthy 4-year-old girl with no pertinent medical history presented to a pediatric primary care urgent care clinic due to persistent bilateral knee pain, with more pain in the left knee than in the right.

She had been seen 1 month prior for pain behind her left knee. Physical examination findings at that time were completely unremarkable, and she was diagnosed with musculoskeletal knee pain and was prescribed ibuprofen. It was suggested that she follow up if the pain did not improve. Nevertheless, the pain persisted and increased in frequency, so she returned to the pediatric primary care urgent care clinic. The pain did not impact her functioning; however, she would have to sit down or stop walking after extended periods of play.

On examination at the current presentation, her vital signs were normal and unremarkable. She was well appearing and was able to ambulate without difficulty. She had no point tenderness or musculoskeletal abnormalities in either knee or leg on examination. 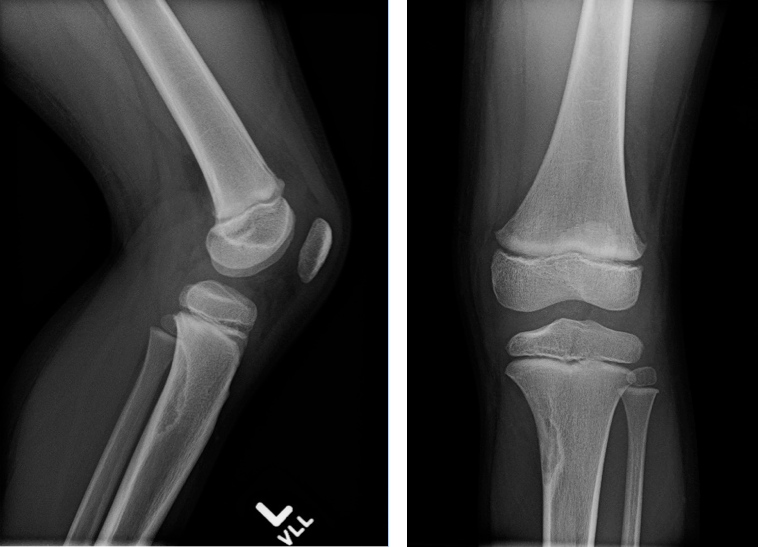 Although it is not a standard treatment for NOFs, the patient was referred to physical therapy (PT) due to the significant impact of her pain. She completed 19 PT sessions, occurring 4 to 5 times a week initially and decreasing to twice a week, which led to decreased frequency of pain. But because her pain had not completely resolved, she was referred to pediatric orthopedic surgery specialists. The orthopedics team ordered magnetic resonance imaging (MRI) (Figure 2), the findings of which confirmed those of the original radiographs. 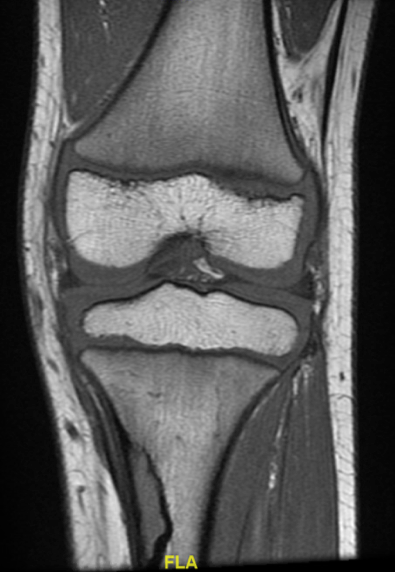 Figure 2. MRI confirmed the presence of a benign fibro-osseous lesion in the proximal left tibia.

Discussion. NOFs are common, benign, fibrous lesions described as eccentric lesions at the cortex near the physis in long bones. The etiology is poorly understood, although recent evidence suggests a genetic association with sequence variations in the mitogen-activated protein (MAP) kinase pathway.1,2 They are usually an incidental finding in teenagers after trauma3 or are frequently detected on radiographs obtained for other reasons.4 Almost all occur in the distal femur, distal tibia, and proximal tibia.1 The average age of patients with NOFs is 12 years, but ages can range from 4 to 20 years, with lesions rarely occurring after age 20 years.1 Boys are reportedly twice as likely to be affected by NOFs.1

In this patient’s case, the lesion was found in the proximal tibia—an unusual finding in a 4-year-old patient, especially given that she had no known antecedent trauma. On radiographs, NOFs appear as small, well-defined, eccentric, lytic lesions with scalloped sclerotic borders,5 which is consistent with the radiographic findings in our patient. Occasionally, there can be an associated pathologic fracture, which presents a more aggressive picture but should not be mistaken for a malignant tumor.3

The differential diagnosis for a NOF includes fibrous dysplasia and chondromyxoid fibromas. Treatment for small, asymptomatic NOFs does not require further follow-up, although parents should be advised to return to care if the patient becomes symptomatic. This is especially true in younger patients, in whom the lesions may grow related to adjacent bone, increasing the risk of fracture.

Our patient did present initially with pain, but at the time of her initial radiographs, the NOF was thought unlikely to be the source of her discomfort, given her reassuring physical examination findings.4 Additionally, curettage and bone grafting may be considered for lesions causing pain, lesions taking up more than 50% of the diameter of the bone, or those in high-stress areas (eg, distal femoral metaphysis).3,5 The prognosis for NOFs is typically excellent, with a low risk of recurrence, and in general, resolution with adolescence as the bone fills in.3