A 3-week-old boy was brought to the emergency department (ED) for episodes of cyanosis. The first episode had occurred during a diaper change. His mouth had turned blue, and the discoloration had spread up to his forehead and had lasted for 30 seconds. Subsequently, he had an additional 3 episodes of cyanosis similar to the first. Each episode had lasted less than a minute and had not been associated with apnea, unresponsiveness, abnormal movements, or feeds.

He had no upper respiratory tract symptoms, cough, fever, vomiting, or diarrhea. He had no sweating with feeds or difficulty feeding. He had been born at 38 weeks of gestation via induction for intrauterine growth restriction to a gravida 1, para 0 mother. The mother tested positive for group B streptococcus, and the mother and the newborn had received antibiotics. His birth weight was 2.296 kg.

Physical examination. At presentation, he was well appearing, well nourished, and in no acute distress. His vital signs were as follows: rectal temperature, 37.1 °C; heart rate, 150 beats/min; respiratory rate, 40 breaths/min; oxygen saturation, 92% on room air; blood pressure, 78/62 mm Hg in the right arm; and weight, 2.3 kg. Cardiovascular examination revealed normal heart rate and rhythm without any murmur, and strong central and peripheral pulses. His lungs were clear to auscultation with no increased work of breathing. His abdomen was soft, nontender, and without any organomegaly. He had normal tone and normal neonatal reflexes.

During feeds, the newborn’s heart rate was 110 beats/min, and his oxygen saturation dropped to 86% on room air. The oxygen levels returned to normal with cessation of feeding and without any other interventions. He received a bolus of dextrose 10% and was placed on maintenance intravenous fluids. 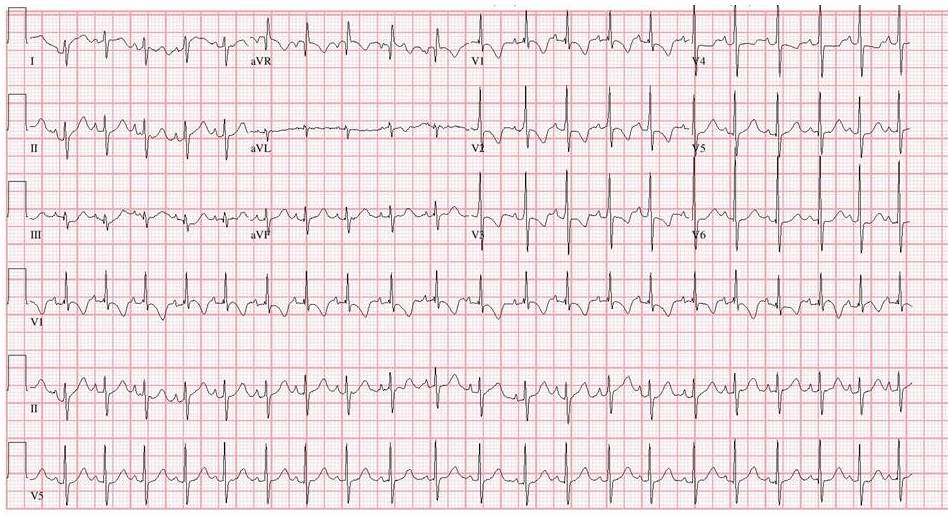 He had two episodes of oxygen desaturations to 86% to 89% on room air while feeding and sucking on a pacifier. He was placed on 1 L/min oxygen via nasal cannula and was admitted to the hospital with a cardiology consult. 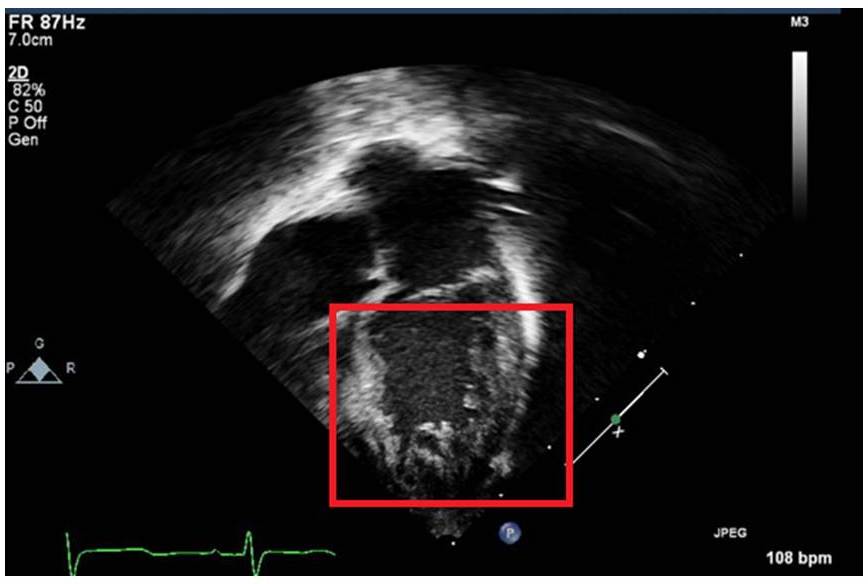 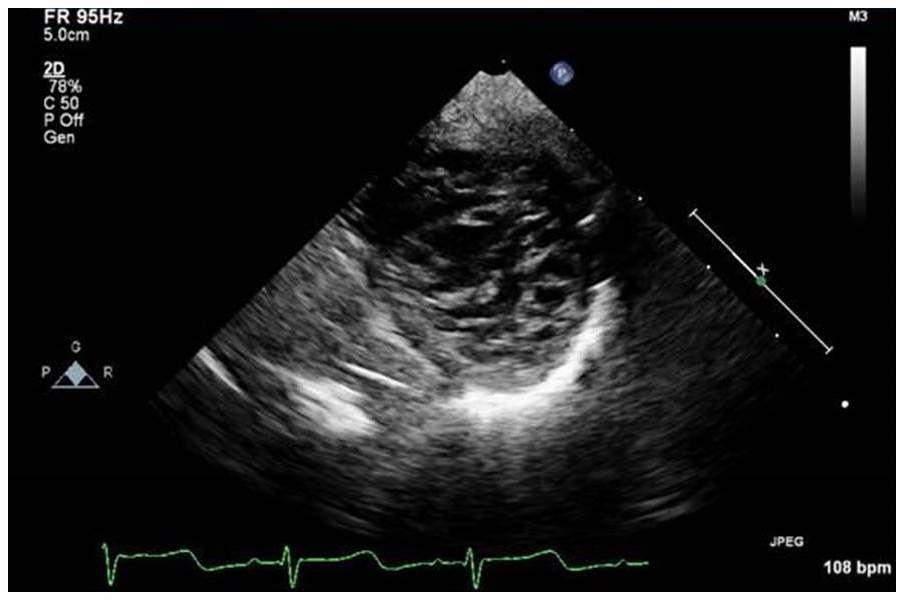 Figure 2. The patient’s echocardiogram showing trabeculations in the left ventricle from an apical 4-chamber view (top) and a parasternal short-axis view (bottom).

These findings were consistent with a diagnosis of ventricular noncompaction cardiomyopathy (NCC). He was started on aspirin, enalapril, and furosemide and was monitored for 24 hours, after which he was discharged home. He has since then been lost to follow-up.

Discussion. A brief resolved unexplained event (BRUE), formerly called an apparent life-threatening event, is an event in a newborn or infant lasting less than a minute that is characterized by a sudden change in one of the following: color (central cyanosis or pallor), respirations (absent, decreased, or irregular), tone (hypertonia or hypotonia), or level of responsiveness (altered mental status, loss of consciousness, or lethargy), without a clear explanation and without an underlying medical condition.1

A thorough history regarding the circumstantial details before, during, and after the event and any interventions performed by the caregiver, along with a detailed physical examination, are required to establish the diagnosis of BRUE and for risk stratification. Patients are classified as low-risk if they are older than 60 days of age, if they had been born at 32 weeks or more of gestation, and currently have a postconceptional age of 45 weeks or greater.1 Additionally, the event must have been their first without recurrence and have lasted less than 1 minute without cardiopulmonary resuscitation (CPR) intervention. For these low-risk newborns and infants, routine testing and hospital admission are not recommended. The main interventions include teaching families about the BRUE diagnosis and providing educational resources on CPR.1

Patients are classified as high-risk if they are either 60 days of age or younger or had been born at less than 32 weeks of gestation with a postconceptional age of less than 45 weeks, if they have experienced multiple episodes, or if they have had episodes persisting for more than 1 minute or required CPR.2 For high-risk infants, the American Academy of Pediatrics recommends further workup to identify time-sensitive diagnoses with potentially devastating outcomes.2 There is currently no clinical practice guideline for diagnostic testing, given the varied possible etiologies and the availability of limited evidence. However, a decision-making pathway with diagnostic evaluations organized into tiers has been proposed to help clinicians assess and manage high-risk BRUE patients.2 Our patient initially was stratified as high-risk BRUE based on his age and multiple recurrences of cyanosis.

Cyanosis can be categorized as peripheral or central. Peripheral cyanosis, or acrocyanosis, is a benign physiologic process due to peripheral vasoconstriction, with discoloration involving only the extremities. In contrast, central cyanosis can involve the entire body, including the oral mucosa and tongue, and is suggestive of hypoxemia. The differential diagnoses include central hypoventilation, pulmonary disease, cardiac disorders, and hemoglobin dysfunction.3 Given that the patient’s cyanotic episodes were associated with activity (feeding and sucking), a cardiac evaluation was performed.

NCC is a rare cardiac disorder characterized by the failure of proper maturation of developing myocardial trabeculae into compact tissue during embryonic stages. This results in a “spongy myocardium” that can lead to arrhythmias, thrombi, and heart failure secondary to ventricular dysfunction.4 The pathologic process typically involves the left ventricle; however, cases of right ventricular abnormalities have been reported.5

Most patients with NCC present with symptoms of heart failure, while others may manifest with palpitations, syncope, or sudden cardiac death. Rarely, patients can be completely asymptomatic. The age of presentation can vary widely, ranging from infancy to adulthood.6 Although NCC commonly has an autosomal dominant inheritance pattern, it can also occur de novo with a lack of family history of cardiac disorders.

The proposed workup for NCC includes an ECG and cardiac imaging studies. An ECG can detect abnormalities in 80% of patients, with findings such as bundle branch block and left ventricular hypertrophy, although these findings are nonspecific.5 Cardiac imaging, including echocardiography and magnetic resonance imaging (MRI), are usually diagnostic. A noncompacted endomyocardium with twice the thickness of the mature outer epicardium, in addition to the presence of significant trabeculations on echocardiography, is indicative of NCC. Cardiac MRI can be helpful in patients with ambiguous echocardiography findings. Management focuses on treating heart failure symptoms, preserving cardiac function, and preventing complications such as thromboemboli and arrhythmias.4

Given the vast differential diagnosis of BRUE, a through history and physical examination can help guide clinicians in the appropriate diagnostic tests based on the individual patient’s presentation. While most patients with BRUE will be classified as low-risk and will not require further workup, rare life-threatening etiologies, as demonstrated by our patient, are possible and must be ruled out, especially in higher-risk patients.