A 10-month-old otherwise healthy boy was brought to a pediatrician’s office for evaluation of a scalp lesion that had been present since birth. Physical examination revealed a 2.0 × 1.5-cm, yellow-orange, cobblestoned plaque on the left parietal scalp (Figure).

How should you manage this lesion? 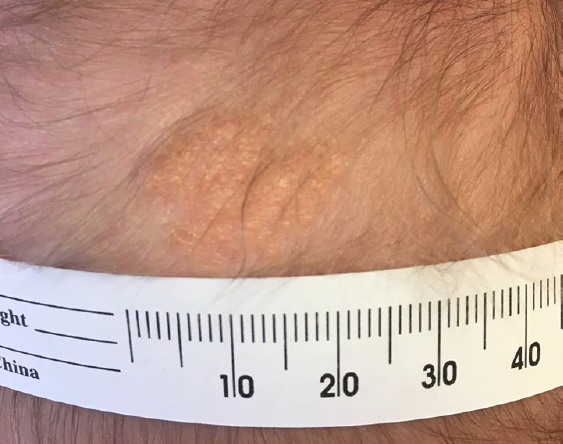 Figure. A yellow-orange plaque on a boy’s scalp, consistent with nevus sebaceous.

This lesion is nevus sebaceous (NS), an epidermal hamartoma characterized as an oval or linear yellow-orange plaque on the face, scalp, or neck.1 NS typically is present at birth and grows proportionally with the patient until puberty, when it undergoes rapid hormonally driven development and expansion.1 Due to its characteristic appearance and distribution, NS typically is a clinical diagnosis but may be confirmed by biopsy.1 Extensive NS can be associated with neurological or structural abnormalities.1,2 Recent studies have elucidated that both syndromic and idiopathic NS are caused by postzygotic HRAS and KRAS mutations.3

NS is considered a premalignant lesion and can develop both benign and malignant neoplasms, most commonly trichoblastoma and basal cell carcinoma, respectively.1 Currently, there is not concurrence on the true rate of malignant transformation in NS, with estimates ranging from 0 to 22%.1

Full-thickness epidermal and dermal excision is considered the definitive treatment for NS; however, debate is ongoing over if and when NS should be excised either prophylactically to prevent malignancy or for cosmetic purposes.1 Although adults and older pediatric patients may undergo NS excision with local anesthetic, general anesthesia is commonly required for younger patients, and recent studies have reported that children undergoing general anesthesia prior to 4 years of age can later have lower test scores and IQ scores than their peers.4

In conclusion, in light of the potentially low risk of malignant transformation early in life and the inherent risks of surgery and general anesthesia before age 5, early prophylactic surgery for malignancy prevention is not justifiable and should be considered carefully if for cosmetic purposes only.2 For patients and/or parents who are able to understand the condition and the associated risk, close observation and follow-up through adolescence may be the ideal options.