A 20-year-old man presented with double vision and tingling/electric shock-like sensations of the right side of the body.

History. The patient had been seen in the emergency department 2 weeks prior for left-sided facial weakness and numbness of the right ear. At that time, he reported having no recent history of fever, trauma, headache, or blurring of the vision. He had a history of travel to Mexico a month prior. Results of computed tomography scanning of the head without contrast at that visit were reported as unremarkable. His condition had been diagnosed as Bell palsy, and he had been discharged home on valacyclovir and prednisone with scheduled follow-up with a neurologist.

He reported having taken the valacyclovir but not the prednisone when he was seen by the neurologist 12 days later. The neurologist noted that the facial symptoms were improving but that the man had developed numbness of right side of the body. The patient reported having had a similar episode of right-sided body sensation with weakness 2 years ago, which had resolved spontaneously.

Physical examination. At the current presentation, the patient was alert, active, and afebrile. He was in no acute distress but reported having a strange electrical shock-like sensation in the right upper and lower limbs and the right side of the body. Kernig and Brudzinski signs were negative for meningitis. The pupils were round, equal, and reactive to light. Horizontal nystagmus was present. He had double vision at the left lateral gaze. He continued to have mild residual left facial palsy but was able to raise the eyebrows bilaterally. Motor and sensory function of the cranial nerves, including proprioception, were normal and equal bilaterally.

The next day, the patient’s sensory symptoms worsened, and he appeared very uncomfortable, constantly shifting positions and reporting electrical shock-like sensations in the right upper and lower extremities. He also reported reduced taste sensation on the left side of the tongue.

Magnetic resonance imaging (MRI) scans of the brain showed an abnormal area of increased signal intensity in the left centrum semiovale measuring approximately 1.8 cm, and another in the left periatrial region measuring approximately 1.2 cm (Figure 1). The lesion at the semiovale showed ring enhancement on one view, which prompted a differential diagnosis of neurocysticercosis (Figure 2). 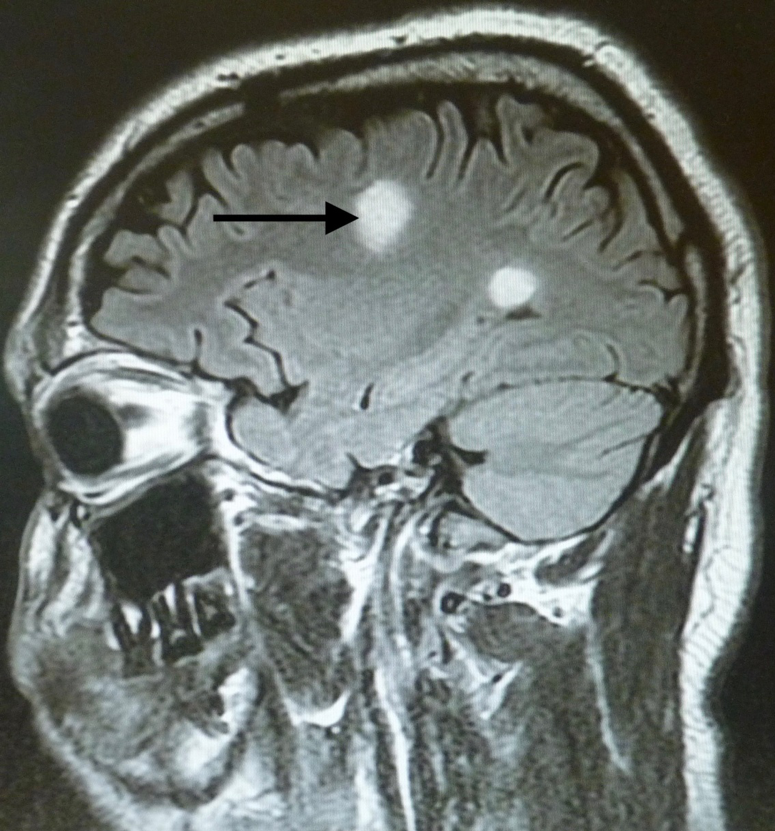 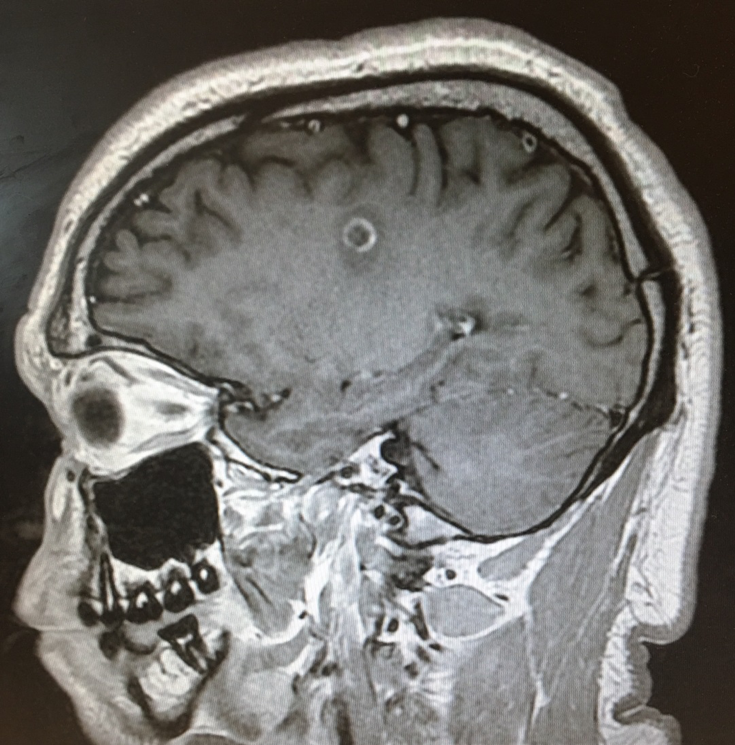 MRI of the brain repeated 4 days later showed no change in the signal abnormalities involving the left centrum semiovale and left periatrial white matter. Abnormal signal involving the pons bilaterally was demonstrated (Figures 3 and 4). Findings of MRI of the cervical and thoracic spines were normal. 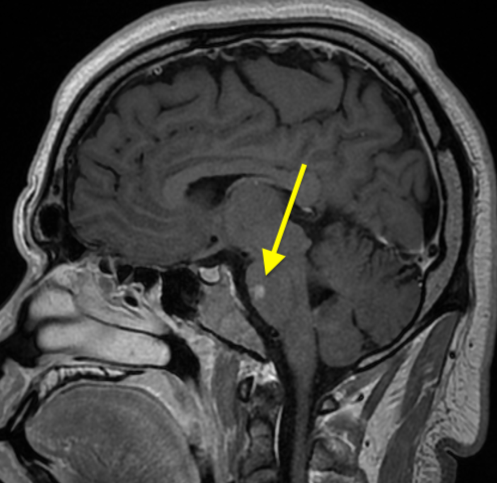 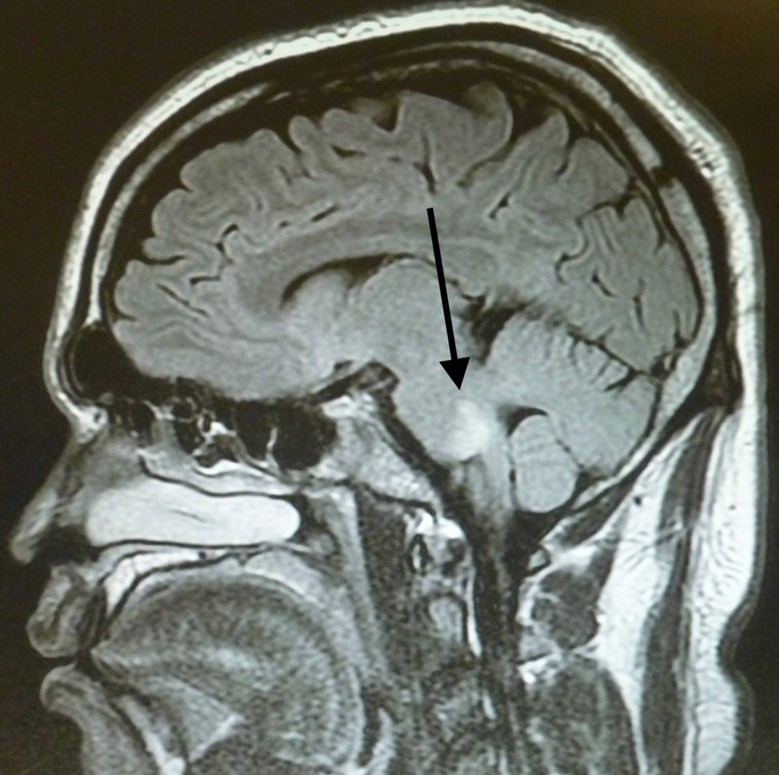 Treatment and Follow-Up. The patient was treated with a 5-day course of high-dose methylprednisolone. His symptoms markedly improved, and he was discharged home on oral prednisolone at tapering doses. His case was being followed by the neurology clinic, and he had been doing well.

Discussion. Our patient has a rare case of MS presenting as Bell palsy initially and with the later development of typical sixth (abducens) and seventh (facial) cranial nerve symptoms in addition to sensory manifestations.

Bell palsy is the most common postinfectious neuropathy presenting as an acute paralysis of the face. A painless abducens nerve paralysis also may occur after a nonspecific viral illness. The prognosis of both conditions is good provided the paralysis is not complete. Other causes of acute facial paralysis include cerebrovascular accident, demyelinating disease, brainstem tumor, otitis media, and mastoiditis.

MS is the most common immune-mediated inflammatory demyelinating disease of the central nervous system (CNS). Most people with MS receive a diagnosis between the ages of 20 and 50 years, with at least 2 to 3 times more women than men affected.4,5 A few cases of MS associated with Bell palsy have been reported.6,7 Fukazawa and colleagues reported facial palsy as first symptom of MS in 4.7% of 107 patients with MS.7

Oligoclonal bands are present in the CSF of more than 85% of patients with MS. To distinguish between oligoclonal bands in the CSF due to a peripheral gammopathy and oligoclonal bands due to local production in the CNS, serum and CSF should be tested simultaneously. Oligoclonal bands, however, can be observed in a variety of other diseases such as subacute sclerosing panencephalitis, inflammatory polyneuropathy, CNS lupus, and brain tumors and infarctions.8

A published clinical practice guideline recommends that clinicians should not routinely perform diagnostic imaging for patients with new-onset Bell palsy, except in the presence of some evident clinical findings that warrant imaging, such as visual disturbances, paresthesia, impaired coordination, and paresis.9

This patient’s case emphasizes how easily the transient and brief symptoms of MS can be overlooked or misinterpreted and the MS diagnosis and treatment delayed, with potentially devastating effects for the patient.