Hemoglobin A1c Variation and Correlation With Time in Nondiabetes, Including Prediabetes

Objective. The purpose of the study is to determine whether hemoglobin A1c in nondiabetes (which includes prediabetes) inevitably rises with time.

Research design and methods. A retrospective data review of 5742 serial A1c measurements performed on 2089 patients (including patients with prediabetes) meeting the criteria of not having diabetes and having at least 2 A1c measurements performed during the 33-month study period was analyzed for correlation or covariance with time. Correlation coefficient was calculated for each patient’s A1c series and categorized as either positive, negative, or zero. The percentages of patients with positive, negative, or zero correlation coefficients were calculated for the entire nondiabetes population and for the subset with prediabetes.

Results. A1c measurements in 56% of the nondiabetes and 52% of the prediabetes subset showed positive correlation with time. Sex did not significantly affect the outcome.

Conclusions. In nondiabetes (which includes prediabetes), A1c does not consistently rise with time, showing a decrease in nearly half of the patients. This finding, given the additional context of the referenced studies, supports the suggestion that absent overlaid pathophysiologic glucose metabolic mechanisms causing diabetes, prediabetes is neither prodromal to, a precursor to, nor causal to diabetes. Programs designed to prevent diabetes by focusing on reducing A1c levels in prediabetes, while successful, may be underemphasizing the real target of the interventions: underlying abnormal glucose metabolism, not prediabetes per se. Study limitations include short duration (less than 3 years) and a study population that was more than 90% Hispanic.

Hemoglobin A1c plays a significant role in the diagnosis, evaluation, and management of diabetes mellitus, as well as in the categorical diagnosis of prediabetes (defined as an A1c level between 5.7% and 6.4% [39 and 46 mmol/mol], inclusive).1 An A1c level of 6.5% (48 mmol/mol) or greater is used to diagnose diabetes.2 High A1c levels predict complications in diabetes.3 Diabetes treatment goals are currently based on A1c level targets.4

In our clinical practice, for example, we work with patients with prediabetes; the A1c levels of many of them vary up and down but generally remain in the prediabetes range or even fall below it with time, without any specific clinical intervention. If A1c levels do not consistently rise with time in nondiabetes (of which prediabetes is a subset), then the noted success of programmatically preventing diabetes by decreasing A1c in prediabetes must be seen within the context of some “spontaneous” decrease, regardless of intervention. In fact, Shang and colleagues, in their 12-year population cohort study, concluded that among older adults, approximately 19% with prediabetes may revert to normoglycemia, and only 11% progress to type 2 diabetes.8

Research findings such as this still do not answer the question: How does A1c generally behave in relation to passing time in nondiabetes (defined as no diagnosis of any type of diabetes, which includes prediabetes)? Does it consistently rise with passing time, implying inevitable progression to diabetes, or does it decrease with increasing time?

We set out to explore this question by retrospectively analyzing serial A1c measurements performed on nondiabetic patients to determine whether there is universal positive covariance of A1c levels with time (that is, an increase in A1c as time increases), which would suggest progression with time, during the 33-month study period between 2015 and 2018.

Institutional review board (IRB) clearance. The study was determined by the IRB of the Clinica de Salud del Valle de Salinas, Salinas, California, as not requiring IRB review.

Data management and analysis. R programming language was used throughout.

Protection of identifiable patient information. Accomplished by relevant data field “one-way” anonymization (meaning that de-anonymization or re-identification of the patient was not possible), using the Anonymizer R package function.

Inclusions. Only records where A1c or mean plasma glucose (MPG) was measured—in some of the records, only the latter was reported; where this was the case, MPG results were converted to A1c using the standard conversion formula, MPG = (35.6 ⋅ A1c) – 77.3.

The following Boolean statement (in R programming language) was used to accomplish the subsetting:

The resulting data subset represented all patient records without the diagnosis of any type of diabetes; each unique patient had a series of A1c measurements over the study period. The subgroup with a diagnosis of prediabetes based on A1c range of 5.7% to 6.4% (39 to 48 mmol/mol) was identified. Subgrouping by sex was also done, but not by age, since the age varied for the same patient during the 3-year study period.

Plots and tables. Examples of individual records (3 in all, representing positive, negative, and zero coefficients) subjected to correlation coefficient determination were plotted. The frequencies of the resulting coefficients were plotted as a histogram for visual analysis for the main population and then for the prediabetes subgroup. A table was constructed showing the number of A1c values in the series of each record (2 to 17) and how many records had that number in the series. A second table showed the percentage of patients (records) in each group whose A1c series had zero, positive, or negative correlation coefficient values.

Table 1 shows the count of A1c measurements in each series and how many records (sorted by the latter), along with percentages, had that count. The range of A1c counts was 2 to 17 in a series. 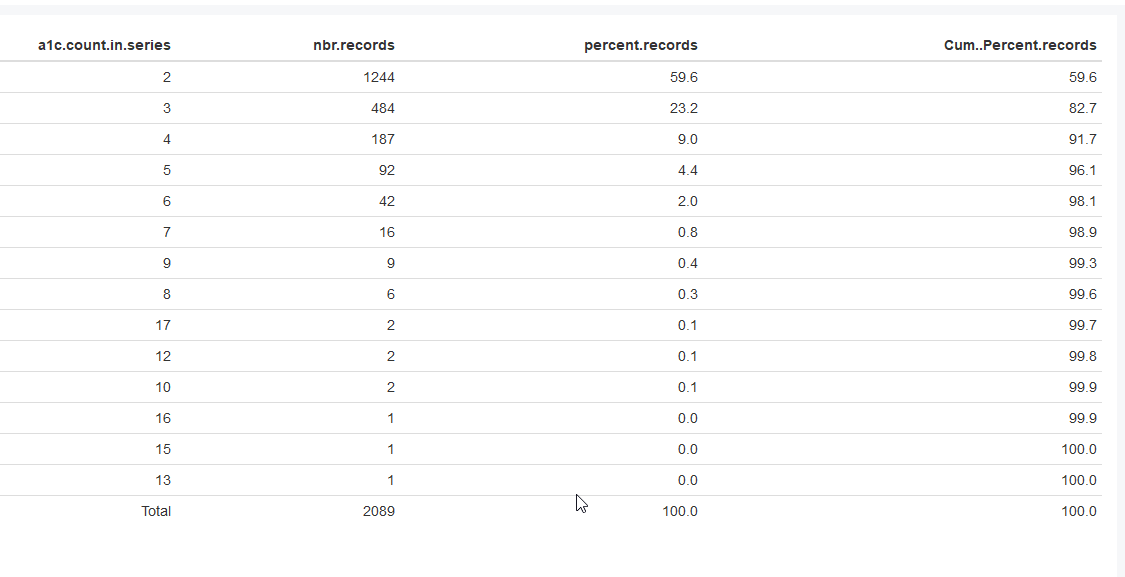 Table 1. Distribution of records by count of A1c in series.

This table shows the count of A1c measurements in each record-series and how many records (with percentages) have that count. Range of A1c-count in series is 2 to 17. Most of the records (98%) had 6 or fewer A1c measurements over the study period. The table is sorted by number of records (nbr.records). This table is for NoDM; the PreDM data are similar: most of the records fall into less than 6 A1c values in the series.

Figure 1 shows 3 records, each with serial A1c measurements, examples of individual records where the correlation coefficient is negative, zero, or positive, respectively. It is a combination figure with plots and tables displaying the same data.

Three records each showing serial A1c values on a time-axis rendered in calendar dates in the plots and also in numerical date format in the associated table in the bottom column. The left panel is an example of a negative A1c-time correlation coefficient (-0.92); the right panel is positive (+0.78). The middle panel shows an A1c value that is unchanged with time; functionally, this is read as zero correlation coefficient, although the calculated value is “not applicable (NA),” because zero appears as one of the terms. In the NoDM group, there 593 records with negative coefficients, 334 with zero, and 1162 with positive coefficients.

Figure 2 depicts the histograms of all the 2089 coefficients calculated for each record of each of NoDM and PreDM groups, respectively. Range for NoDM: -1 to +1; and for PreDM: -1 to +1. 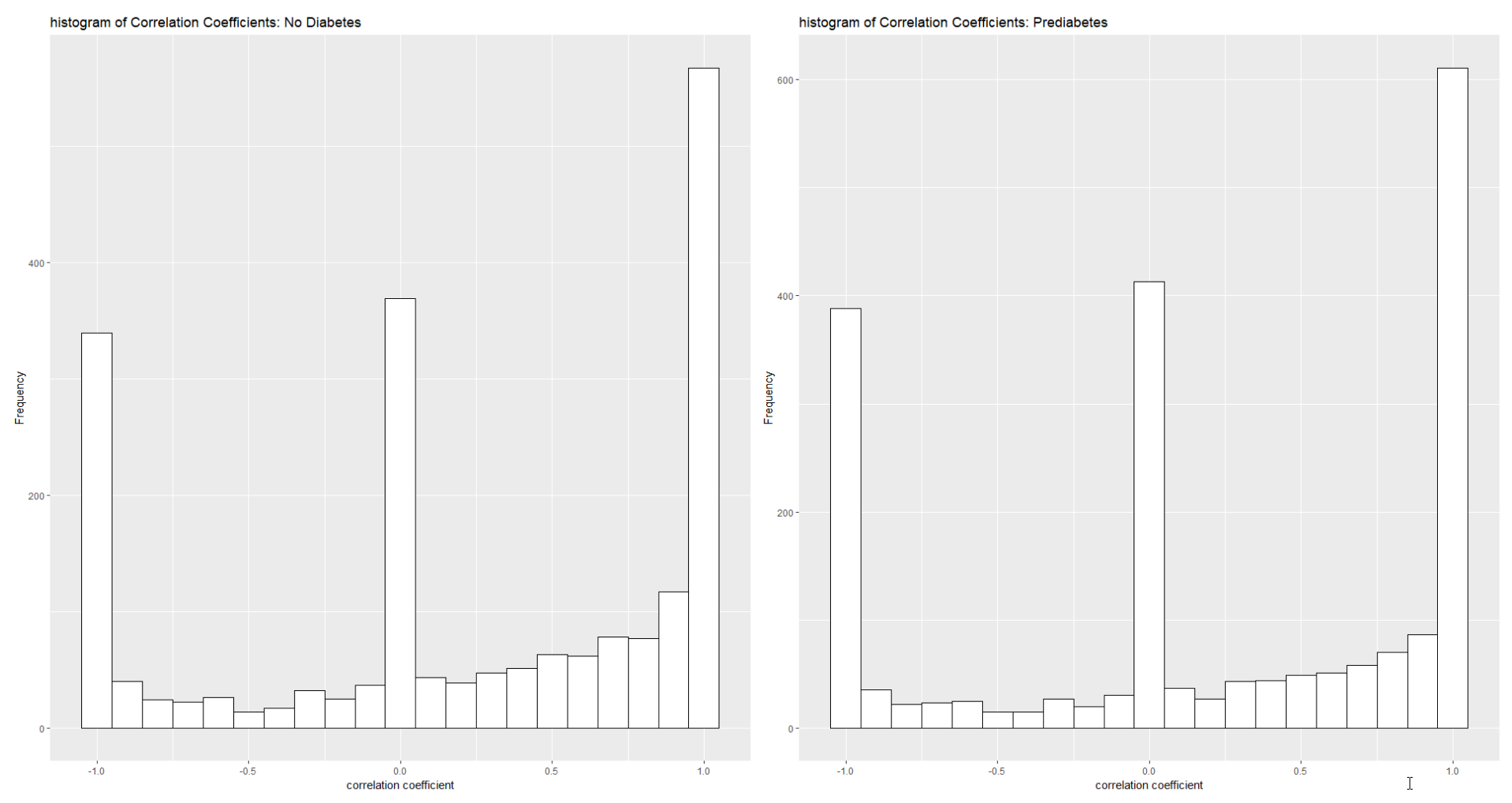 The plot shows the histograms of all the 2089 correlation coefficients calculated for each record of each of NoDM and PreDM groups. The range is -1 to +1.

Table 2 is a tabular presentation of the counts of negative, zero, and positive coefficients for both NoDM and PreDM groups, respectively, and their percentages.

The sex of the patients did not meaningfully affect the outcome; thus, the analysis is not included.

Slightly more than half of the patients who had serial A1c measurements performed during the study period (n = 2089) showed a rising pattern (positive correlation coefficient with time) in their A1c levels, while the rest showed either a decline or zero pattern (negative or no correlation with increasing time), in both the NoDM group and the PreDM subset. Sex had little if any effect on the outcome.

In patients without diabetes, serial A1c levels do not invariably rise with time; only slightly more than half of the cases showed a positive correlation with increasing time in this study; gender did not affect the results. This A1c-time relationship was determined by the use of Pearson correlation statistical method. The study itself is limited by a duration of less than 3 years (33 months) and a relatively nondiverse population (approximately 90% Hispanic); age (range 3 to 98 years) did not significantly affect the outcome and was not part of the final analysis.

The same conclusion applies to patients with prediabetes, a subset of patients without diabetes: A1c levels do not inexorably rise with time. The wider implication is that prediabetes (based on A1c categorization) does not as a rule develop into diabetes with time; that is, prediabetes is not necessarily a precursor to diabetes. It takes the presence of abnormal glucose metabolism resulting in uncontrolled hyperglycemia to get to diabetes. Without the superimposition of this pathophysiology on a nondiabetic or prediabetic population, A1c progression to diabetes is probably unlikely. As Shang and colleagues found in their study, for example, only 11% of patients with prediabetes progressed to diabetes, while more (19%) reverted to normoglycemia.8 An interpretation is that those prediabetic individuals progressing to diabetes in all likelihood met the condition of existent significant glucose metabolic pathophysiology, which is what led to diabetes.

Finally, while A1c forms a numerical continuum from normoglycemia to hyperglycemia through prediabetes to diabetes, the implications of A1c values in nondiabetes are different from those in diabetes. For example, Yong and colleagues9 concluded that “prediabetes as defined by HbA1c levels is not a risk factor for adverse outcomes after surgery,” while Sherwani and colleagues1 found that elevated A1c has also been regarded as an independent risk factor for coronary heart disease and stroke in persons with or without diabetes. Elsewhere, Paprott and colleagues10 reported that “HbA1c levels in the prediabetic range were not associated with an increased mortality risk.”

Diabetes is definitely more than an A1c disease and probably other than an A1c disease. When determining the need for and efficacy of interventions aimed at reducing A1c levels in nondiabetic persons (including prediabetic individuals) for the purpose of preventing or delaying diabetes, investigators may want to emphasize that the real target of the interventions is the underlying pathophysiologic glycemic mechanisms, not A1c per se or prediabetes. Otherwise, the risk of unintentionally promoting the concept of prediabetes as a prodrome of diabetes, thereby inviting the assignment of causation, remains high, as is the risk that health insurance companies may decide to categorize prediabetes as a preexisting illness with respect to diabetes.

Prediabetes, a categorical diagnosis, has not been shown to evolve into diabetes, to our knowledge. Programs directed at prediabetes,11 which succeed in reducing A1c in that group, and or in preventing diabetes, are effective only to the extent that they have a favorable impact on the abnormalities of glucose metabolism when such are already present in the individual.