Gallstones in Infancy Secondary to Cholestasis Due to Total Parenteral Nutrition

A 3-year-old girl presented to the emergency department with severe abdominal pain, which she rated as 8 of 10 in severity on the Wong-Baker FACES pain scale. The onset of the pain had been that morning during a long car ride. She described the pain as crampy and reported that it had begun in the right upper quadrant but had since become diffuse throughout the abdomen. Related symptoms included reduced activity and refusing to eat or drink. In addition, the mother reported that the girl had foul-smelling urine. The patient denied fever, headache, nausea, vomiting, diarrhea, rash, or difficulty breathing.

History. Her medical history was notable for gastroschisis (which had been surgically repaired on day 9 of life) that had been complicated by cholestatic jaundice secondary to prolonged total parenteral nutrition (TPN) administration in neonatal intensive care unit (NICU) and a 10-cm ventral hernia. The cholestatic jaundice had resolved, but the hernia remained unresolved.

Diagnostic tests. The patient was admitted to the hospital, was ordered to have nothing by mouth, and underwent gastrointestinal decompression via nasogastric tube placement. Noncontrast computed tomography scans of the abdomen and pelvis were significant for small peripheral calcified stones in the lumen of the gallbladder. An ultrasonogram of the abdomen revealed cholelithiasis without bowel obstruction.

On the second day of hospital admission, a surgical consultant recommended laparoscopic cholecystectomy and hernia repair. The procedure was performed the following day, during which cholesterol gallstones were found (Figures), but without any other complications. The patient was evaluated on day 4 of admission, and discharge was recommended with a follow-up visit in 2 weeks. 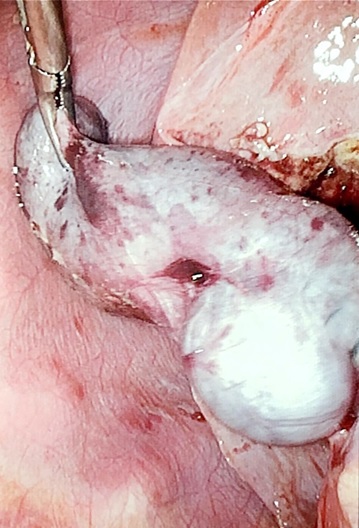 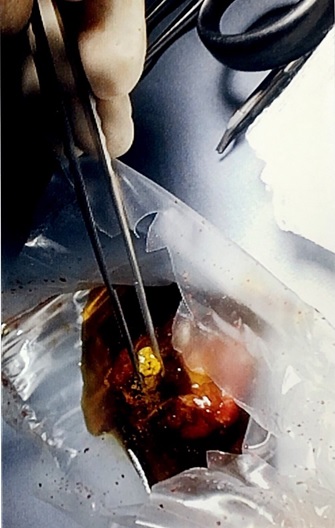 Figures. Photographs of laparoscopic cholecystectomy demonstrating the gallbladder removed from the patient (top) and the gallbladder with a cholesterol gallstone held with pickup forceps (bottom).

Discussion. Cholelithiasis is rare in infancy, although the rates of diagnosis have increased as a result of the widespread use of ultrasonography in neonates.1 Most cases of neonatal cholelithiasis are due to hemolysis or an abnormality in the biliary tree or ileal tract.2 TPN administration is a lesser-known risk factor for the development of this condition, primarily related to the relative immaturity of the bile acid enterohepatic circulation system.3 In our patient’s case, cholesterol gallstones were found and were consistent with the etiology of cholestasis.4 In contrast, black pigment stones are due to chronic hemolysis, while brown stones are caused by infectious etiologies.4

A 1982 case series described 3 cases of cholelithiasis in premature infants, which were all associated with TPN and furosemide administration.5 However, another case series in 1982 describing 3 cases in infants suggested that underlying gastrointestinal (GI) tract dysfunction is the cause of gallstone formation rather than TPN administration.6 A 1983 study suggested that TPN administration worsens underlying GI tract dysfunction, thereby increasing the risk of gallstone formation in these children.7 However, a 1987 retrospective analysis determined that gallstone formation in infants and children on TPN may indeed be iatrogenic, leading the authors to state that ultrasonography may be used in infants receiving TPN to detect potential biliary tract obstructions.3

The pathogenesis of cholelithiasis in infants is still poorly understood, with the most current theories suggesting a lack of enteric stimulation with TPN, underlying metabolic dysfunction in bile acid formation, or that infants receiving TPN are predisposed to developing gallstones compared with adults due to the relative immaturity of their GI system.8 The lack of enteric stimulation is particularly important, since this results in decreased bile acid secretion and decreased gallbladder motility; this cholestasis with subsequent bile acid accumulation is likely the primary mechanism of gallstone formation.9

Cholestasis and bile acid accumulation was the subject of a retrospective study of ultrasonographic assessments in 41 neonates on TPN, the results of which showed that 44% developed gallbladder sludge, 12% later developed “sludge balls,” 5% developed gallstones, and only 1 infant (2%) ultimately required a cholecystectomy.3 A 1993 retrospective analysis confirmed the rarity of gallstone formation in 400 infants and children receiving TPN at a rate of only 2%.10 Other factors that have been proposed as triggers of the formation of gallstones include increased formation of deoxycholate and lithocholate secondary to TPN administration, increased release of cholestatic endotoxins in neonates who are concomitantly septic, and possible toxicity of unspecified TPN components.9 Subsequently, the administration of large amounts of amino acids with low amounts of fat was proposed to result in cholestasis and cholelithiasis formation in these patients.10

Regardless of etiology, the authors of a 1985 case series11 and a 1986 case series12 suggested that the high rate of spontaneous resolution of such gallstones indicates that a conservative approach is more appropriate. Indeed, the current recommendation for these patients is to perform surgery only when there are severe biliary symptoms.1 Specifically, cholecystectomy should be performed in such children and infants when there is severe right upper quadrant/epigastric pain with food intolerance.13 Medical treatment has been attempted, but ursodeoxycholic acid was found to be ineffective in the treatment of gallstone formation other than providing temporary symptom relief14; likewise, cholecystokinin-octapeptide prophylaxis given concurrently with TPN was found to be ineffective in the prevention of TPN-associated gallstone formation.15

When an infant or child presents with severe abdominal pain and food intolerance with a history of long-term TPN administration, clinicians should ensure appropriate workup to determine whether the etiology is gallbladder-related. Laboratory study results will reveal progressively increasing direct bilirubin levels, along with elevated levels of serum bile acids, serum aminotransferases, and serum alkaline phosphatase.16 In our patient, results of laboratory investigation were unrevealing, but results of imaging studies were diagnostic. Therefore, performing abdominal ultrasonography would be paramount in disclosing the presence of a cholelithiasis as the etiology of pain and food intolerance.13 If this is indeed the case, cholecystectomy is the most appropriate approach.13 For most patients, this results in complete resolution of symptoms; for rare cases of patients who still have recurrent or residual symptoms, providing histamine H2-receptor antagonists likely will provide relief.13 Recognition and treatment of cholelithiasis secondary to TPN is complicated by the rarity of such presentations, but clinicians should keep these causes in the list of differential diagnoses when presented with a young patient with such symptoms and a history of prolonged TPN administration.