A 68-year-old woman presented to the emergency department at an outside hospital with weakness, slurred speech, confusion, polyuria, and diarrhea. She had been in her usual state of health until a week prior.

History. She had a history of hypothyroidism, depression, hypertension, chronic obstructive pulmonary disease, and osteoporosis. Her medications included vilazodone, risperidone, clonidine, and lorazepam. The patient’s family denied any alcohol intoxication, drug or medication overdose, or recent falls. A brain computed tomography (CT) scan without contrast had been performed at the outside hospital, the results of which were unremarkable. Her symptoms were assumed to be adverse effects of medication, and she had been discharged with instructions to discontinue the risperidone and clonidine.

Two days later, the patient was transferred to our facility for increased lethargy, dysarthria, tunnel vision, and emergent seizures.

Physical examination. Upon examination, the patient had a temperature of 35.1°C, a blood pressure of 190/94 mm Hg, a pulse of 79 beats/min, a respiratory rate of 21 breaths/min, and an oxygen saturation of 96%. She was mildly encephalopathic with intact brainstem reflexes.

Results of brain magnetic resonance imaging (MRI) with and without contrast on admission were unremarkable except for mild microvascular ischemic changes.

The nephrology service was consulted for the hyponatremia. Laboratory test results were suggestive of syndrome of inappropriate antidiuretic hormone secretion (SIADH), possibly resulting from the use of the selective serotonin-reuptake inhibitor vilazodone; she was cautiously treated with hypertonic saline.

In the following week, the patient had two generalized tonic seizures requiring urgent intubation. Her seizures were attributed to hyponatremia in the setting of a normal MRI and sporadic seizure activity on admission. Electroencephalography showed diffuse slowing with right hemispheric sharp waves and occasional triphasic waves. She was eventually started on levetiracetam for seizure control. Further workup included a lumbar puncture (LP), the results of which showed herpes simplex virus 1 (HSV-1) infection (Tables 2-4).

An infectious diseases specialist was consulted, and the patient was treated with intravenous acyclovir and antibiotics for pneumonia. A brain MRI was repeated on the seventh day of hospital admission, the results of which showed extensive cortical edema consistent with a diagnosis of herpes simplex encephalitis (HSE) (Figures). 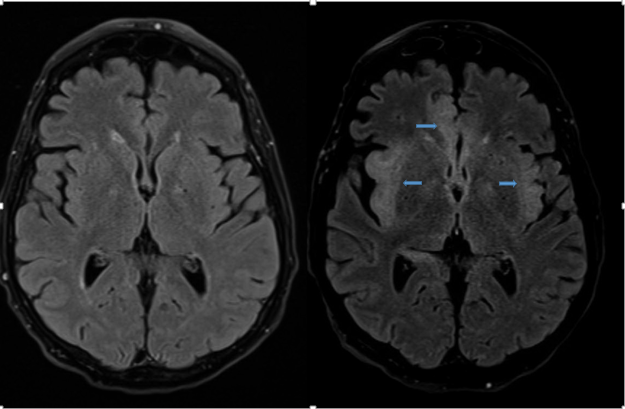 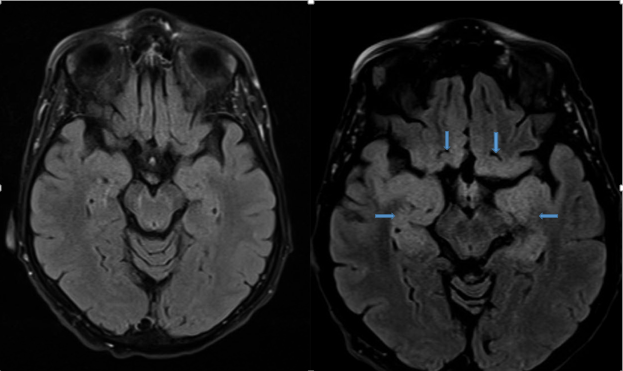 Outcome of the case. On day 17 of hospitalization, the patient remained encephalopathic, showing very little neurological recovery, which prompted initiation of dexamethasone.1 The family decided to transition the patient to comfort care, and compassionate extubation was performed. On day 28, she was transferred to a hospice facility.

Discussion. Encephalitis is an inflammation of the brain, from either infectious or noninfectious causes, leading to neurologic dysfunction.2 HSV-1 belongs to a group of human herpesviruses (HHV), which includes varicella-zoster virus (HHV-3), Epstein-Barr virus (HHV-4), and cytomegalovirus (HHV-5).2

The proposed mechanism for primary infection involves invading mucous membranes or damaged skin, particularly in the nasal mucosa.2,4 The virus is then able to travel via fast retrograde axonal transport to the neuronal cell body in the dorsal root ganglion, where it remains latent until reactivated.2 While reactivation can be spontaneous, it is usually triggered by immunosuppression or stress.5 HSV preferentially targets neurons, and therefore damage is localized to the gray matter, with white matter damage being mostly incidental.3 HSE has a predilection for the temporal lobes in cases of encephalitis.

In managing a patient with suspected HSE symptoms, LP should be performed unless contraindicated.2 Contraindications to LP include cerebral edema, tumor, or any space-occupying lesion that would make LP potentially dangerous and that could be identified on neuroimaging.7 PCR testing of CSF has a sensitivity and specificity of 96% and 99%, respectively, when performed between 2 and 10 days from the onset of symptoms.5 In a patient with HSE, the CSF typically demonstrates elevated opening pressure, a normal glucose level, and an elevated protein level, as well as lymphocytic pleocytosis2 with the possible presence of red blood cells and xanthochromia.5 Gram stain results and culture for bacteria will be negative.5

Since a patient with encephalopathy is likely to present with a decreased level of consciousness, causes such as hypoglycemia and intoxication must be ruled out. Once the HSE diagnosis has been confirmed, treatment must begin immediately. The initial step is treating any emergent concerns, including respiratory or hemodynamic failure.2 The importance of early treatment in patients with HSE has been extensively documented,2,4,5,7,8 and first-line treatment remains intravenous acyclovir, 10 mg/kg, 3 times daily for 14 to 21 days. Before termination of the drug, a repeated LP should be performed to verify that the virus has been eliminated.5 Clinicians ought to be aware of potential renal impairment before starting acyclovir.7 Ganciclovir or foscarnet are potential options in cases of acyclovir shortage or resistance, respectively.5 Some evidence exists for using corticosteroids such as dexamethasone as an adjunctive therapy 1 to 3 days after inoculation in cases of HSE,4,5 but extensive clinical trials have yet to be performed.

Our patient presented with encephalopathy and seizures, which initially were attributed to hyponatremia, thought to be secondary to SIADH. Hyponatremia as a primary symptom in HSE cases is incredibly rare.9-11 A proposed mechanism involves infection leading to the development of SIADH,11 but evidence for this does not exist. We propose that hyponatremia should be recognized as a clinical manifestation of HSV infection and should prompt immediate workup.

When considering neuroimaging in a patient with a possible HSE infection, MRI is superior to CT,2,5 and in most situations an MRI study with and without contrast is the best option.2 A predictable diffuse inflammation is usually present on the initial MRI performed in the emergency department. Several case studies support this presumption, with diffusion-weighted MRI being most sensitive to encephalitis early in infection and a gradual loss of intensity over the course of 2 weeks.3 In our patient’s case, the initial MRI findings were unremarkable, and it was not until a week later that imaging demonstrated the typical lesions consistent with HSE.

Summary. HSE requires expedited diagnosis and treatment to effectively reduce patient morbidity and mortality. Typically, dual-weighted MRI reveals characteristic temporal lobe abnormalities early in the progression of the disease. PCR testing after a suggestive MRI then establishes a high degree of diagnostic certainty. In our patient’s case, HSE presented without the hallmark MRI findings of temporal lobe damage. This abnormal presentation delayed acyclovir treatment for several days until CSF analysis results were positive for HSV. Every passing hour is critical when responding to diseased brain tissue, which has an inherent reduced capacity for cell regeneration. Additionally, acyclovir has therapeutic action limited to restriction of viral replication. Therefore, an abnormal presentation of HSV infection creates specific challenges to treatment and highlights the diagnostic value of PCR testing for HSV in CSF.