A 43-day-old girl was brought to the clinic for the first time by her mother due to a dry rash along the girl’s face and cheeks. Since then, the patient presented to the clinic several times over the past 2 years for a recurrent dry rash all over her body. The patient’s mother denied any relevant medical history in the family, both from the mother’s and the father’s side.

Physical examination. The patient’s vital signs at presentation during the most recent visit, at 2 years of age, were normal, with a weight of 11.9 kg and a height of 0.9 m. The child had no constitutional symptoms, and a review of systems revealed no pertinent findings. She was well-developed and well-nourished and in no acute distress. The child’s face was normocephalic and atraumatic, with an eczematous rash distributed along the face. Palmoplantar keratoderma (PPK) with diffuse distribution was present (Figures). 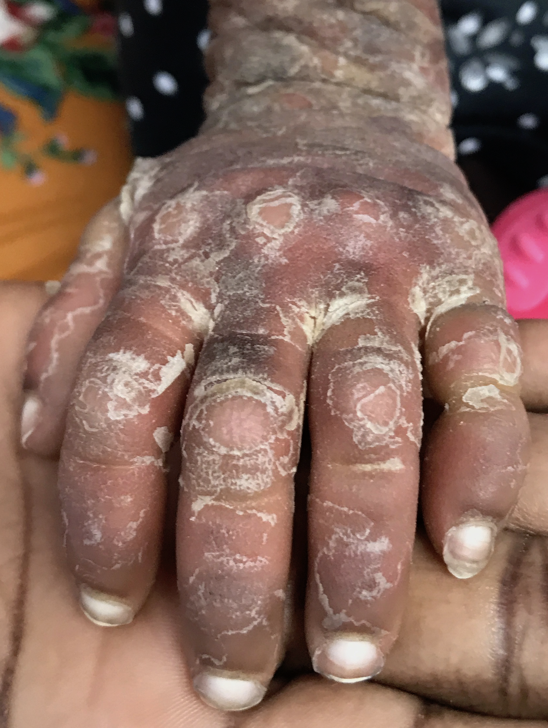 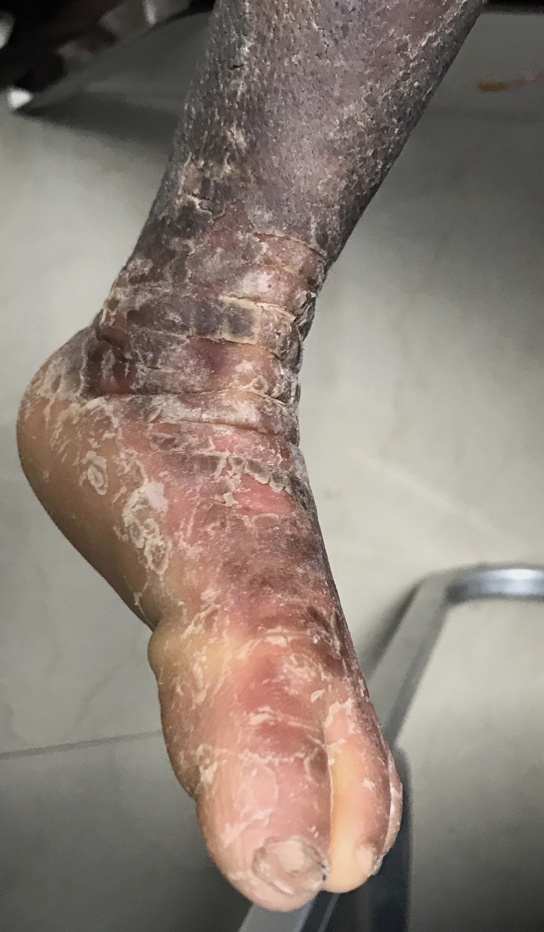 Figures. At 2 years of age, the patient had prominent hyperkeratosis on erythematous skin on the hands and lower extremities.

During a previous visit at 9 months of age, the patient had been referred to a dermatologist and to an otolaryngologist due to hearing loss that had been reported by the mother and confirmed in the clinic. Four months later, at 13 months of age, the patient again followed up for excessive dry skin/eczema over the entire surface of the body. During this visit, she was given a diagnosis of failure to thrive and was referred to endocrinology and gastroenterology specialists.

The patient was seen by a pediatric endocrinologist at 15 months of age for a preliminary diagnosis of failure to thrive; at this visit, her weight was 2.845 kg. At a follow-up visit 3 months later, when the patient was 19 months of age, the endocrinologist reported that the patient’s failure to thrive had resolved due to dietary changes (including high-calorie foods and high-calorie formula) and that her weight was now again within the normal range, at 10.2 kg.

The patient was evaluated by a pediatric dermatologist for the PPK, who referred the girl to a general genetics clinic for genetic evaluation of her now clinical diagnosis of epidermolytic ichthyosis. A DNA sample via blood and skin biopsy was sent for genetic testing, the results of which identified a pathogenic variant in the gap junction protein alpha 1 gene (GJA1) that associates these variants with erythrokeratodermia variabilis et progressiva (EKVP) without features of oculodentodigital dysplasia (ODDD). Further testing is under way to elucidate the exact nature of the variation in GJA1. The patient is doing well overall and visits the clinic as needed for treatment of skin discomfort.

Discussion. EKVP is a very rare autosomal dominant disorder (although autosomal recessive inheritance has been reported1), first described in 1925,2-4 characterized by localized and generalized hyperkeratotic plaques and erythematous patches.5 The disease manifests itself at early stages of life but may also arise later during early adulthood. The lesions tend to improve in the winter and worsen during the summer.6 The exact prevalence of EKVP is still unknown.7

Of 21 identified connexin-encoding genes, mutations in the gap junction protein beta 3 (GJB3) and 4 (GJB4) genes, encoding connexins 31 and 30.3, respectively, are known to cause EKVP.8,9 Recently, a report for the first time described novel de novo mutations in GJA1 causing EKVP without the features of ODDD.10,11 Mutations of these 3 EKVP-associated genes (GJA1, GJB3, and GJB4) are also linked with other clinical presentations, such as hearing loss,12 ODDD, PPK, and congenital alopecia.11,13 No known cure exists for EKVP. Treatment of symptoms generally involves the use of topical emollients including keratolytics, retinoids, and calcipotriol; oral retinoids including etretinate, acitretin, and isotretinoin also have been found to be beneﬁcial.14