A 34-year-old man presented to the emergency department with the inability to pass oral secretions after attempting to swallow a multivitamin pill. The patient had no prior history of dysphagia or atopy. He was an active smoker. His family history was noncontributory.

Diagnostic tests. Initial neck radiographs showed no radiopaque foreign body and no epiglottic swelling. Subsequent non-contrast computed tomography (CT) scans of the neck and chest revealed a hyperdense lesion with associated circumferential esophageal swelling in the cervical esophagus at the C7-T1 level (Figure). A 4 × 3-mm focus of gas was also noted below the level of the obstruction, a finding concerning for esophageal diverticulum as opposed to tracheal bronchus. 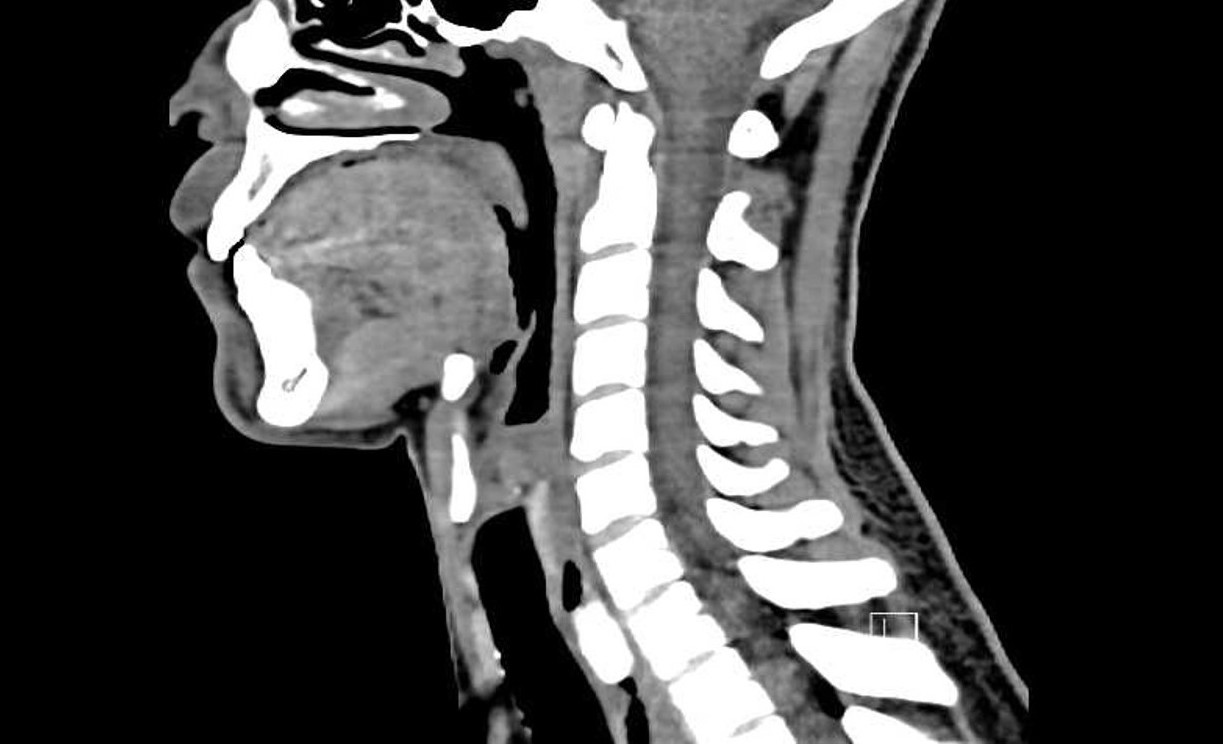 Figure. Noncontrast CT scan of the neck, sagittal view, revealed a hyperdense lesion in the cervical esophagus at the C7-T1 level. There was no evidence of airway impingement or mediastinal air to suggest esophageal perforation.

Rigid upper endoscopy was performed, and rat tooth forceps were used to successfully break up the tablet. At the site of impaction, the esophageal mucosa was noted to be friable and erythematous. A stricture was also identified distal to the site of impaction. Biopsies of the stricture site revealed greater than 50 eosinophils per high-power field, confirming the diagnosis of eosinophilic esophagitis (EoE).

Discussion. EoE is a chronic, immune-mediated disorder with noted esophageal dysmotility as well as eosinophilia on histologic examination. Once thought to be a rare condition, the prevalence of EoE is now increasing with other allergic disorders such as asthma and food allergies.1 The exact etiology is unknown but possible risk factors include diet and a predominantly indoor lifestyle.

Consequently, attention must be paid to men in their 20s or 30s who present with esophageal dysfunction or epigastric pain that is unresponsive to antacids. The most common presenting symptoms in adults are dysphagia, food impaction, and heartburn. And unlike children, adults with EoE are less likely to present with an allergic history or peripheral eosinophilia.2

In a patient with acute dysphagia and the inability to swallow secretions, foreign body impaction is the most likely underlying cause, and endoscopy should be immediately performed to remove the object. However, when approaching an adult presenting with nonacute dysphagia, it is critical to differentiate between oropharyngeal dysphagia and esophageal dysphagia, and whether the dysphagia is with solids, liquids, or both.

The pathophysiology of EoE remains incompletely understood but is thought to be immune-related. It is currently postulated that food allergens may play a role in triggering the inflammatory cascade leading to the development of EoE. Accordingly, some EoE patients respond to food elimination or an elemental diet. However, this therapy is not universally effective. Therefore, other hypotheses have focused on alternative antigen triggers such as airborne allergens.3

Nonetheless, studies show that in EoE, overactivation of T-helper cells triggers the release of cytokines and immunomodulators such as interleukin 5, interleukin 13, and fibroblast growth factor 9. Increased amounts of collagen are deposited within the esophagus, and chronic inflammation leads to classic findings of stacked circular rings, strictures, and linear furrows. 3-5

The diagnosis of EoE is made based on the triad of clinical esophageal dysfunction, 15 or more eosinophils per high-power field on esophageal biopsy, and exclusion of secondary causes of esophageal eosinophilia such as gastroesophageal reflux disease, collagen vascular diseases, inflammatory bowel disease, malignancy and infection.6

Given that EoE is caused by an interplay between environmental allergens and overactivation of the host’s immune system, treatment of EoE is grounded in diet modification, acid suppression, and topical glucocorticoids. If the patient is willing, allergen avoidance through elimination or elemental diets represent an effective first-line treatment for EoE. However, difficulties often include patient adherence, cost, access to an allergist/dietician, and risk of nutritional deprivation.

In patients who fail or refuse dietary therapy, proton-pump inhibitors (PPIs) represent first-line pharmacologic therapy. Studies have shown that an 8-week course of a PPI can reduce esophageal inflammation and eosinophilia.7 Topical steroids such as fluticasone and budesonide are proven to reduce symptomatology as well as esophageal eosinophilia.8-9 First-line therapies should be based on patient preference and available resources. And, depending on clinical response and severity, patients may ultimately require combination therapy.10

When examining patients with refractory dysphagia, serial dilations may be considered. However, dilation as a primary monotherapy remains controversial, because although dilations may provide relief from dysphagia, dilations alone have no impact on inflammation or the underlying eosinophilia. Patients requiring dilation will thus likely benefit from adjunct medical therapy.10

Overall, the prognosis for patients with EoE is uncertain given limited data on the disease’s natural history. Patients with severe symptoms often require long-term maintenance therapy and dietary restrictions. However, long-term therapy should be considered in all patients with EoE, since it is a chronic disease, and the absence of symptoms does not preclude eosinophilic activity.11

Outcome of the case. Following endoscopic intervention and diagnosis of EoE, our patient was successfully discharged on pantoprazole and topical fluticasone with no known recurrence of symptoms.

Summary. The prevalence of EoE is rising, and in a young man with intermittent dysphagia to solids, food impaction, or epigastric pain that is nonresponsive to antacids, EoE should always be on the differential. These patients rarely have a history of atopy and rarely present with peripheral eosinophilia. Consequently, if EoE is suspected, there should be a very low threshold to perform endoscopy with esophageal biopsies once secondary causes of esophageal eosinophilia have been ruled out.