A 34-year-old woman presented with a history of bilateral galactorrhea for the past 4 years. She also reported having amenorrhea and chronic low-grade persistent headache. She denied a history of medication use or substance abuse. She had no known food or drug allergies. Her medical history was not significant.

Physical examination. At presentation, the patient’s blood pressure was 130/80 mm Hg, pulse was 75 beats/min, and respiratory rate was 16 breaths/min. Her height was 160 cm and weight was 71.2 kg, corresponding to a body mass index of 27.8 kg/m2. The patient was alert, orientated, and in no acute distress. Visual acuity was 20/20 in both eyes, and temporal homonymous hemianopia was present. There was no iritis or iridocyclitis. Neurological examination findings were benign. Examination of the breasts showed that the nipples were not retracted, although a brownish white discharge was noted; no areolar skin abnormities were detected. No lumps were noted in either breast. Thyroid examination findings were normal. 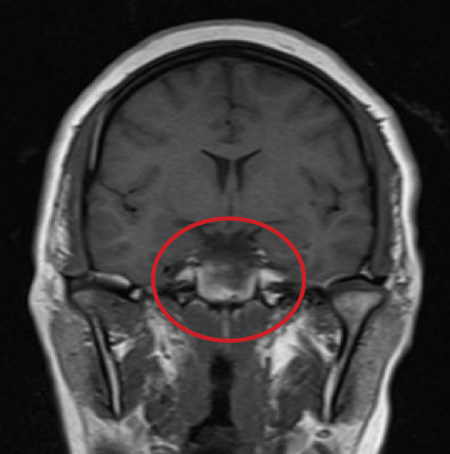 Based on the clinical presentation and diagnostic test results, the patient received a diagnosis of microprolactinoma.

Discussion. A prolactinoma is a tumor of lactotrophs and is the most common (40%-57%) of the benign and secretory adenomas. Classified based on size, microadenomas are less than 10 mm while macroadenomas are 10 mm or larger. Another classification system is based on the type of cells from which the prolactinoma originates and the hormone secreted.1,2 Furthermore, prolactinomas (mostly microadenomas) are prevalent among women (78%-81%), mainly affecting younger females.3,4 The exact etiology is still being explored; nonetheless, mutations in several genes have been noted in association with sporadic and hereditary cases of prolactinomas.5,6

Clinical symptoms of prolactinomas originate from mass effect (tumor growth) and hormone hypersecretion. Specifically, hyperprolactinemia in women can cause menstrual irregularities, galactorrhea, and visual field defects,6 as in the case of our patient. The treatment of patients with microprolactinomas expressing hyperprolactinemia should address the issue of tumor growth and alleviate the associated mass effect, as well as restore normal hormone levels.7,8

Prolactinomas are primarily treated with dopamine agonists, bromocriptine, cabergoline, pergolide, quinagolide, lisuride, and terguride, as well as a serotonin antagonist, metergoline.8,9 Surgery and radiotherapy are also options in cases of patients with expanding prolactinomas, who are not responding well to pharmacotherapy, or with a worsening of vision.9 Most patients respond well to treatment with dopamine agonists, and visual defects disappear; however, visual field testing can be done in some instances.10,11 Several other classes of experimental drugs are being evaluated, including somatostatin analogues, selective estrogen-receptor modulators, prolactin-receptor antagonists, temozolomide, and gene therapy.12,13

Outcome of the case. Our patient is responding well to bromocriptine pharmacotherapy and is being evaluated on regular basis.