A 23-year-old female graduate student with no significant medical history presented to the emergency department (ED) with acute onset of abdominal bloating and severe cramping. She had gone for a walk about an hour after having eaten dinner and had developed severe abdominal pain. The pain was localized to the epigastric region without radiation and was associated with nausea. The patient had attempted self-medication with over-the-counter antacids, acetaminophen, and a proton-pump inhibitor without symptom relief and subsequently presented to the ED after several hours with no change in her pain.

In the ED, further history revealed that the patient had experienced similar but less-severe symptoms for the past 5 years, but they had been occurring more frequently in the weeks prior to presentation. She reported social alcohol use, with up to 7 drinks per week while in college, but much less frequently in the past year to the point of abstinence for 2 months. She denied drug use or smoking and reported being sexually active with one male partner. Additional questioning elicited a recent history of dieting and weight loss as part of training for a marathon.

At presentation, the patient appeared alert but uncomfortable. She was afebrile and normotensive. Her epigastric region was tender to palpation. Physical examination findings were otherwise unremarkable. Results of initial laboratory analysis, including a complete blood cell count, a basic metabolic panel, a hepatic function panel, and a lipase level test, were all unremarkable. 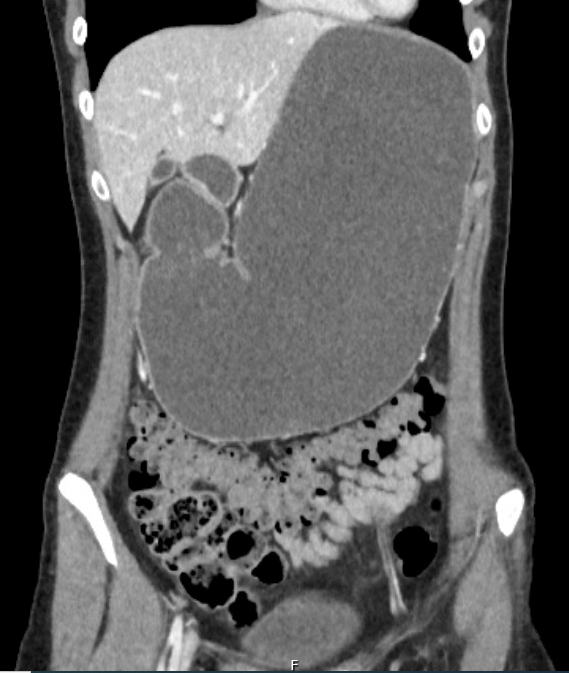 The patient also had marked distention of the duodenum with an abrupt change in duodenum luminal caliber at the superior mesenteric artery (SMA) takeoff, suggestive of SMA syndrome (SMAS). The angle between the SMA and the aorta—the SMA-aortic angle (SAA)—was reduced at 12.8° in the sagittal view, and the aortomesenteric distance (AMD) measured 5 mm (Figure 2). 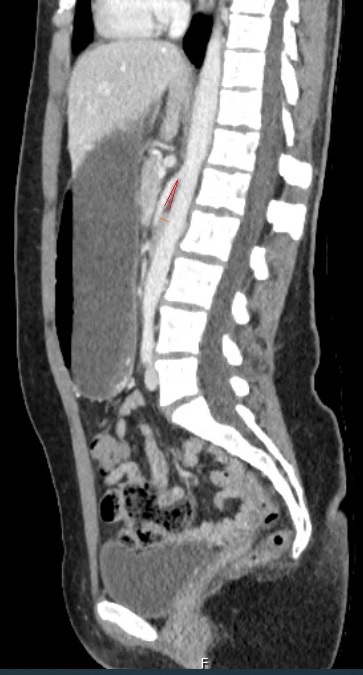 A nasogastric (NG) tube was placed, which immediately returned 700 mL of gastric contents and relieved the patient’s symptoms. She was admitted for monitoring.

Three days after presentation, an upper gastrointestinal radiographic series revealed ongoing distention of the stomach. Results of a gastric emptying study (GES) showed delayed emptying, with 50% of the meal retained at 4 hours.

The patient was managed conservatively and recovered enough to go home. She was seen in the surgery clinic 7 days after discharge and reported that she was still having abdominal symptoms. Another CT scan was performed, the results of which showed that the SAA had increased to 29° but that the AMD remained unchanged at 5 mm.

Despite the improvement in the SAA and delayed gastric emptying found on GES, in the opinion of the surgeons and the gastroenterologists, the patient’s symptoms resulted from SMAS. Her recent weight loss likely precipitated this clinical syndrome.

SMAS is a rare but serious condition of gastric dilation and duodenal obstruction.1,2 The incidence is between 0.013% and 0.3%.3-6 The syndrome was first described in the mid-1800s by Carl von Rokitansky and since then has amassed a number of other names, including Wilkie syndrome, cast syndrome, and arteriomesenteric duodenal compression syndrome.3,7

SMAS occurs when the third portion of the duodenum becomes compressed between the aorta and vertebra posteriorly and the SMA anteriorly, leading to bowel obstruction.2,3 This portion of the duodenum is the most fixed part of the duodenum, as it is tethered by the ligament of Treitz.3 Loss of the normal mesenteric fat pad, either through purposeful weight loss (including anorexia) or a catabolic state following serious illness or injury, can precipitate this compression.2,3,6,7 Other risk factors include congenital abnormalities of the intestines, the SMA, or the ligament of Treitz, as well as spinal surgical procedures.3,8 The application of body casts has also been reported to contribute to the pathogenesis.3 Symptoms include episodic postprandial abdominal pain, nausea, vomiting, early satiety, and weight loss.1,3,4,6 The pain can usually be relieved by proning or assuming a knee-chest or left lateral decubitus position, which relieves the tension at the SAA.2,8

Contrast-enhanced CT scans and magnetic resonance angiography remain the preferred methods of diagnosis, given that both provide data on the SAA and the AMD measurements.3,5 Normally, the mean SAA ranges from 38° to 56°, while the mean AMD ranges from 10 to 28 mm.3,6-8 Angles of less than 25° and distances of less than 8 mm tend to be consistent with SMAS.3,7,8 The 3 overall diagnostic criteria are dilation of the duodenum, an SAA of less than 25°, and compression of the third part of the duodenum by the SMA.4 This patient presented with an SAA of 12.8° and an AMD of 5 mm. Thus, she met all 3 criteria.

Supportive care and weight restoration remain the backbone of conservative care.3 NG tube placement may be necessary for gastric decompression.1 In this patient’s case, the surgeons and gastroenterologists both recommended that she attempt weight gain to relieve her symptoms, but she was not interested in doing so and wished to pursue other options. Consideration of surgical intervention usually follows a failure of conservative measures.3 Surgical options include gastrojejunostomy, duodenojejunostomy, and the Stong procedure (division of the ligament of Treitz with mobilization of the duodenum).2,3 The Stong procedure does not require anastomosis of the bowel.2

Our patient underwent robotically assisted duodenal-jejunal anastomosis. Upon laparoscopic visualization, dilation of both the stomach and duodenum were noted. At 4 months’ follow-up, the patient was doing very well, with full relief of symptoms and no complications.