A 60-year-old man with a history of hypothyroidism, schizophrenia, coronary artery disease, cocaine use, depression, and hypertension was brought to the emergency department (ED) by ambulance after having fallen from his wheelchair, with an unknown downtime.

The man had had many past admissions for psychiatric conditions and for severely elevated levels of thyrotropin. The patient’s thyrotropin level had often been elevated, since his psychiatric illness made adherence to medications difficult.

Upon arrival in the ED, he denied chest pain, dyspnea, and headache. He was confused and oriented only to self, but otherwise he answered questions appropriately. He was noted to be unaware of his medical history. His initial vital signs were as follows: blood pressure, 158/91 mm Hg; heart rate, 47 beats/min; oxygen saturation, 88% on room air; and temperature, 34.7 °C. On physical examination, he had muffled heart sounds, diffusely dry skin, and bilateral lower-extremity pitting edema. He was drowsy but arousable to voice. 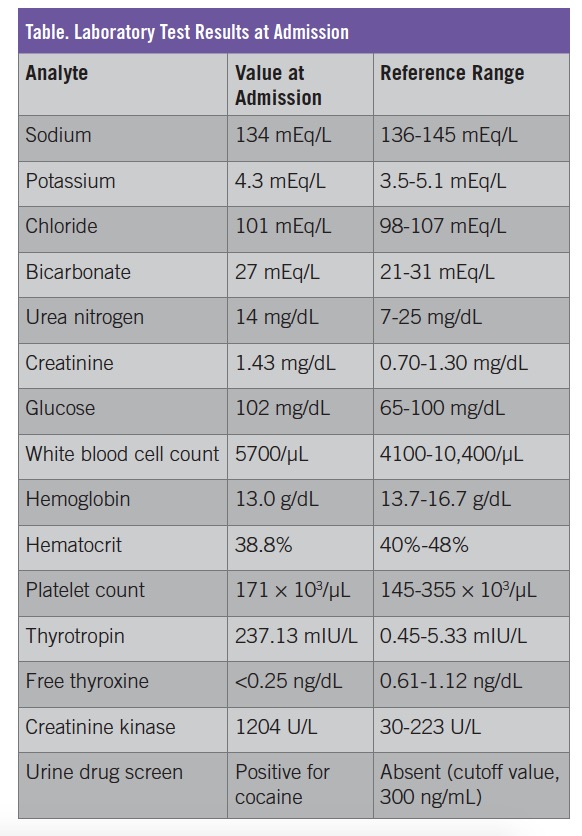 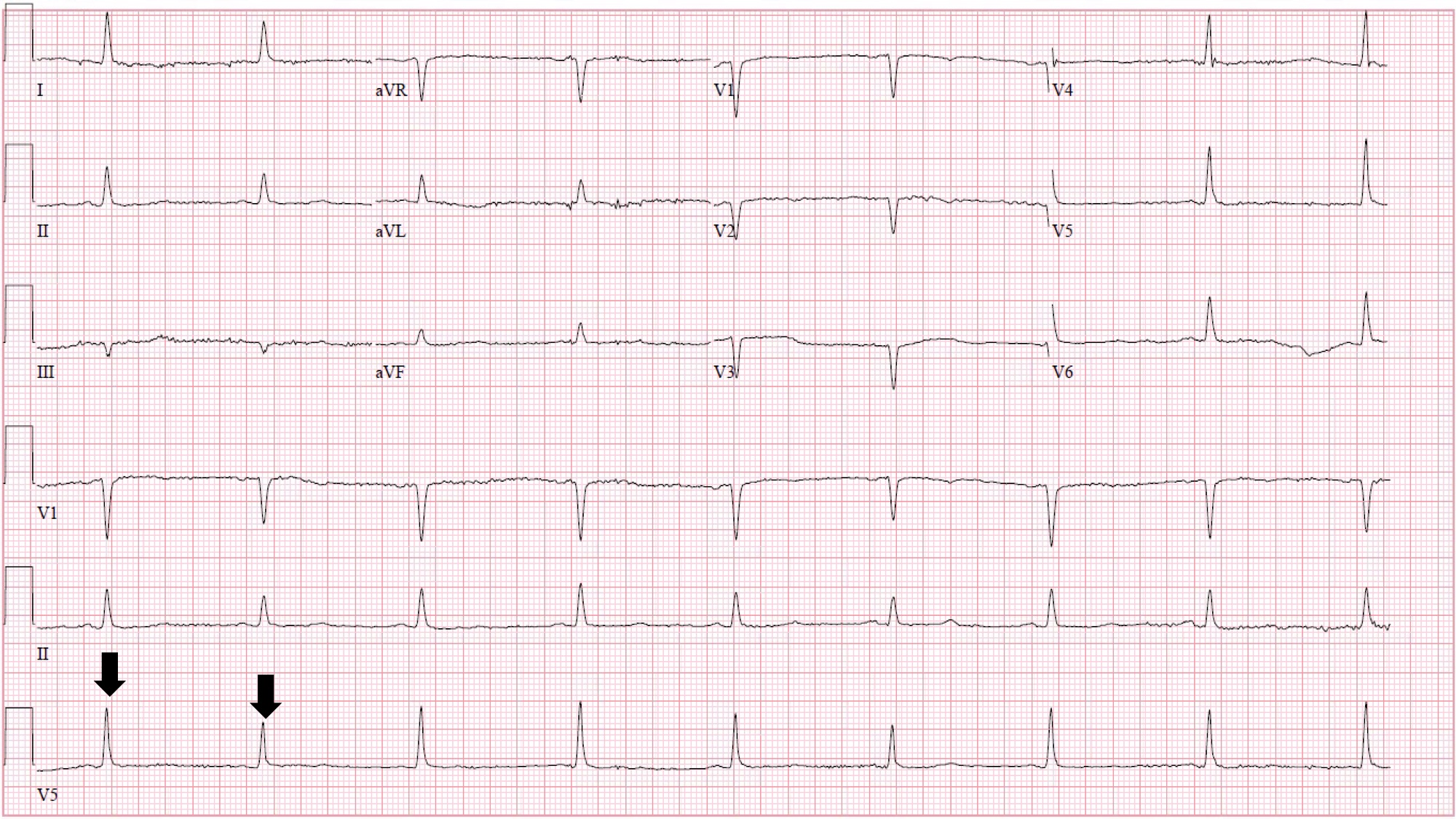 The patient became progressively agitated during his time in the ED, requiring the administration of antipsychotic and anxiolytic medications. His mental status declined rapidly, and he became severely bradycardic, eventually sustaining cardiopulmonary arrest. Chest compressions were initiated, and 1 mg of epinephrine was administered, with subsequent return of spontaneous circulation. The patient was then intubated and transferred to the intensive care unit. 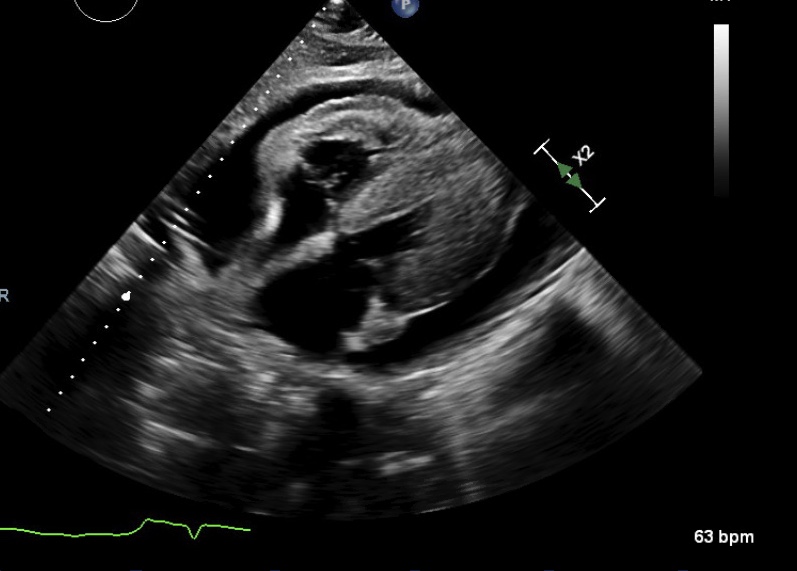 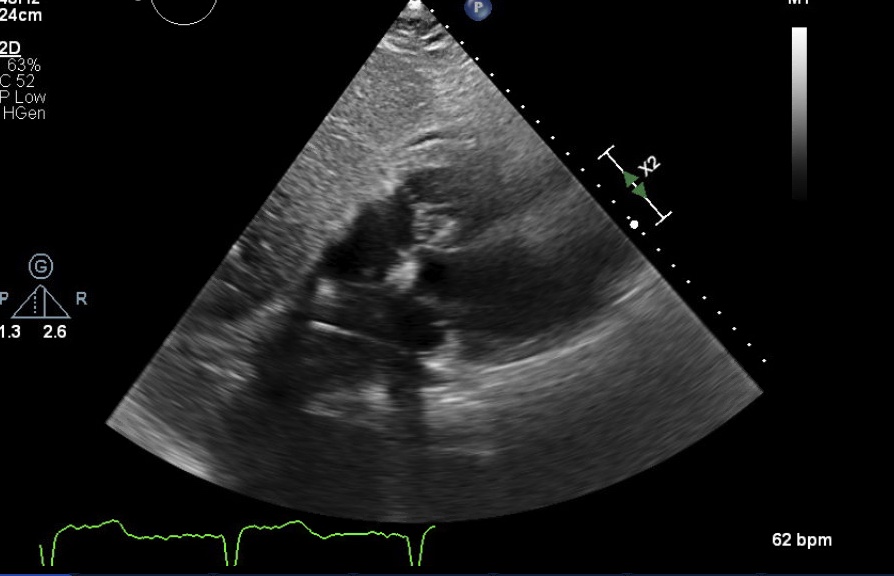 A computed tomography (CT) scan of the head obtained on the night of his admission demonstrated a subacute right cerebral hemisphere subdural hematoma (Figure 4), likely secondary to his fall. It was small and was unlikely the cause of his altered mental status, which we attributed to his extremely low thyroid hormone levels. 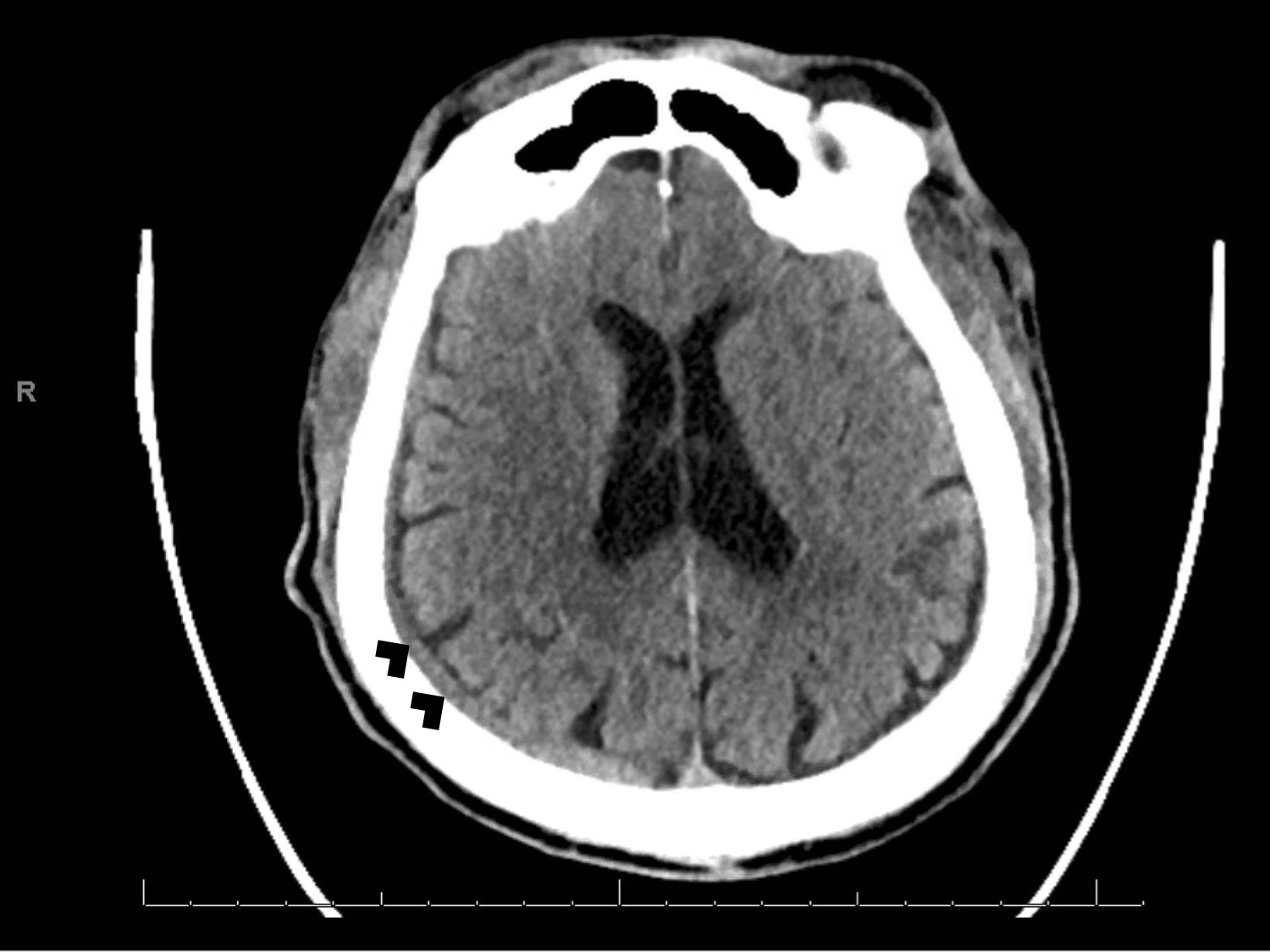 Figure 4. CT scan of the patient’s head taken in the ED, showing a subdural hematoma.

The patient was treated with a 500-µg intravenous loading dose of levothyroxine, and 10 mg of oral liothyronine followed by 5 mg every 8 hours. He was also given 100-mg stress doses of hydrocortisone every 8 hours. Although a baseline cortisol level was not obtained prior to hydrocortisone administration, severe hypothyroidism is known to be associated with adrenal insufficiency, and thyroid hormone replacement can cause adrenal crisis.1

After initiation of treatment, the patient’s hypothermia improved, and he was no longer bradycardic (Figure 5) or hypotensive. He was weaned from the dopamine drip and was extubated several days later, on day 7 of admission. His mental status slowly improved. 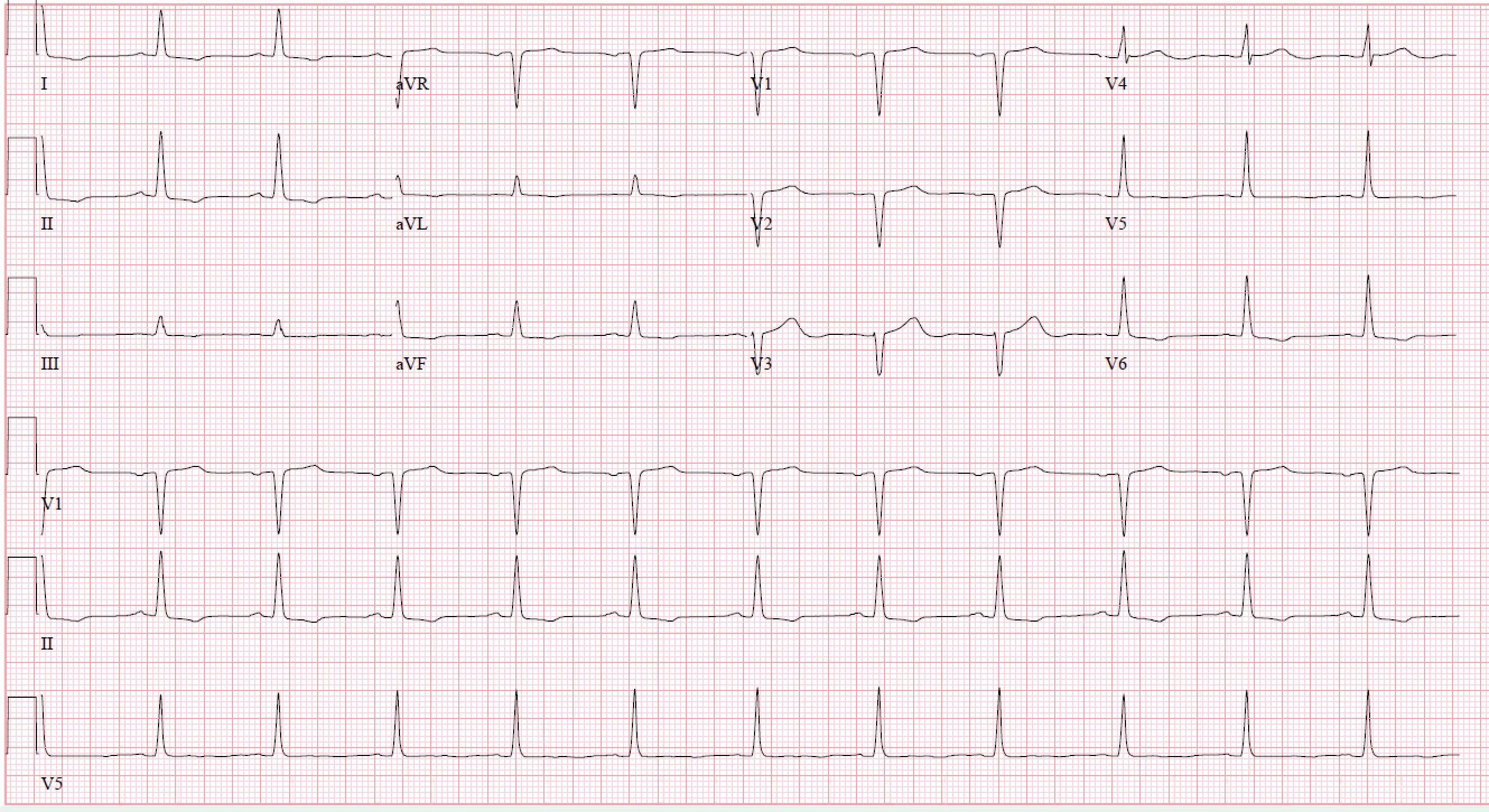 Figure 5. ECG after drainage of the large pericardial effusion and treatment with levothyroxine and liothyronine showing increases in amplitude of QRS complexes, improvement in heart rate to 70 beats/min, and resolution of electrical alternans.

The patient subsequently went into flash pulmonary edema, and he was reintubated on day 9 of admission. His respiratory status worsened, and he eventually died of hypoxic respiratory failure. We suspect that he aspirated, leading to aspiration pneumonia and moderate acute respiratory distress syndrome. Although he had been successfully extubated on day 7, he likely had severe respiratory muscle weakness, which has been associated with myxedema.2 The patient never recovered enough to be discharged, and he eventually died under hospice care.

This case illustrates the difficult workup of patients with comorbid psychiatric, neurologic, and other life-threatening disorders, and serves as a reminder to maintain a clinical suspicion for organic disease in psychiatric patients presenting to the ED with altered mentation. In fact, a population-based study in Israel found that patients with schizophrenia were significantly more likely to have hypothyroidism compared with control patients.3

Hypothyroidism displays an array of signs and symptoms that are not limited to one organ system and is often a forgotten diagnosis in the ED. Clinical features include lethargy and confusion, as well as dry skin, sparse hair, hoarse voice, macroglossia, periorbital edema, and delayed deep-tendon reflexes.4 Myxedema coma is the most severe form of hypothyroidism, with the hallmark symptom being altered mental status.5 Unusual presentations of hypothyroidism include dementia, delirium, psychosis, aggression, and hallucinations.6 Myxedema coma was once reported to have a mortality rate of 80%, but more recent studies suggest a mortality rate of 30%.7,8

Triggers of myxedema coma can vary from medications, gastrointestinal tract bleeding, and sepsis to cerebrovascular accidents and cold exposure.9 Our patient had a number of possible triggers, including a subdural hematoma. Intracerebral hemorrhage has rarely been reported in association with myxedema coma. It is hypothesized that severe hypothyroidism causes a state of acquired von Willebrand disease as a result of decreased synthesis of von Willebrand factor by endothelial cells.10 We suspect that our patient was likely more susceptible to bleeding and developed a subdural hematoma from a fall. Intracerebral hemorrhage has been a postulated trigger of myxedema coma,11 a possibility in our patient, since he had been admitted to the hospital previously with thyrotropin levels even higher than those recorded at this presentation.

Cardiac manifestations of myxedema coma include pericardial effusion, bradycardia, prolonged QT interval, congestive heart failure, and relative diastolic hypertension. Although pericardial effusion is common in hypothyroidism, massive effusion has rarely been reported, reported in only 1% to 3% of cases of hypothyroidism. Cardiac tamponade caused by hypothyroidism is even rarer.12 It is hypothesized that effusion results from capillary dysfunction and endothelial leaking of albumin, as well as reduced lymphatic clearance.12-14 Normalization of diastolic blood pressure and early collapse of the right atrium and ventricle are signs of impending cardiopulmonary arrest.15 Electrical alternans is a diagnostic sign of cardiac tamponade, which was present on our patient’s ECG (Figure 1).

Laboratory values consistent with myxedema coma include a normocytic anemia, hyponatremia, hyperlipidemia, and an elevated creatinine kinase level. Hyponatremia is a common finding in myxedema. It has been hypothesized that it is due to increased levels of antidiuretic hormone.16 Creatinine kinase is often elevated in myxedema, likely secondary to increased muscle membrane permeability.17

The signs and symptoms of severe hypothyroidism can be vague and difficult to connect. Hypothermia can be an excellent sign, since it is a rare presentation in the ED outside of the setting of cold exposure, hypoglycemia, adrenal insufficiency, and sepsis. Hypothermia associated with bradycardia with a normal blood glucose level can also point to an endocrine etiology.16 Higher rates of diagnosis in the ED could potentially reduce morbidity, ensuring faster time to treatment, although the mortality rate is extremely high regardless.

Poor prognosis with myxedema coma is associated with older age, cardiac complications, decreased level of consciousness, persistent hypothermia, and delayed treatment.11 Our patient had an extremely poor prognosis, given that he was severely hypothermic, experienced cardiopulmonary arrest, and had a pericardial effusion with cardiac tamponade, respiratory failure, and intracerebral hemorrhage.

This case also highlights the importance of the use of point-of-care ultrasonography in the ED, especially in patients with unexplained causes of hypotension or cardiac arrest. In this case, it allowed for a quick diagnosis of cardiac tamponade, which ultimately prolonged this patient’s life.