A 51-year-old woman was admitted to the intensive care unit after presenting to the hospital’s emergency department (ED) with acute hypoxic respiratory failure.

The patient originally had presented to an outside ED earlier in the week out of concern for a 2-month history of worsening shortness of breath with stridor and an enlarging thyroid gland. At that time, she had been intubated for airway protection. Fine-needle aspiration (FNA) of the thyroid had been performed, and the findings of the specimen were consistent with lymphocytic thyroiditis. Her primary care provider had previously diagnosed primary hypothyroidism, and the woman had received thyroxine replacement for a few weeks prior to her acute presentation at the outside ED.

At her current presentation to the ED, a flexible laryngoscope examination showed no abnormalities. Physical examination findings were within normal limits except for a large right-sided goiter.

The differential diagnosis for an obstructive goiter includes thyroid cyst, thyroid malignancy, congenital neck mass, or inflammatory lymph node secondary to infectious of noninfectious causes. Because this patient’s condition was stable, a computed tomography (CT) scan of the neck was indicated to evaluate airway patency.1 (If her condition had been unstable, emergent intubation would have been recommended.) The CT scan would help identify the origin of the neck mass as well as potential biopsy sites. FNA would be the recommended method of obtaining tissue unless the mass is causing respiratory compromise. This patient’s case would be very suspicious for a primary thyroid lymphoma in the setting of an enlarging neck mass with the recent diagnosis of lymphocytic thyroiditis.2

A CT scan of the neck was performed to evaluate the patency of the patient’s airway, and the corresponding images showed a hypodense lesion, which represented the air in trachea, completely surrounded by high-density tissue consistent with thyroid tissue—a radiologic sign that is commonly known as the doughnut sign (Figures). 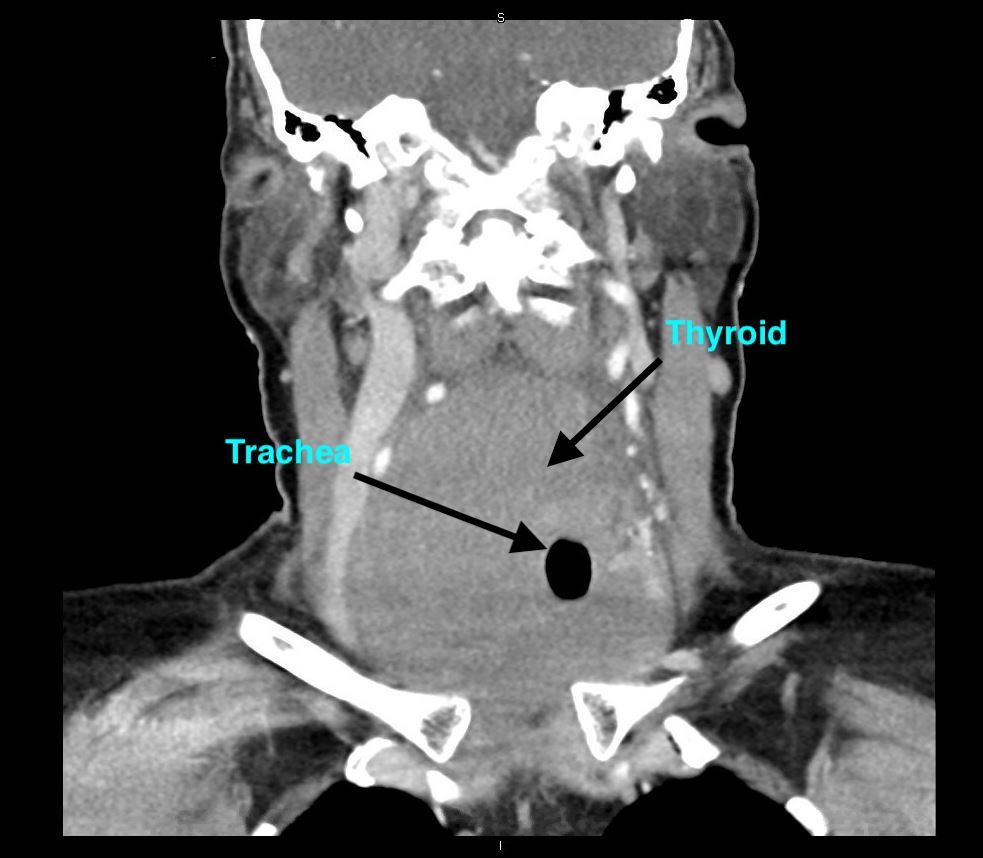 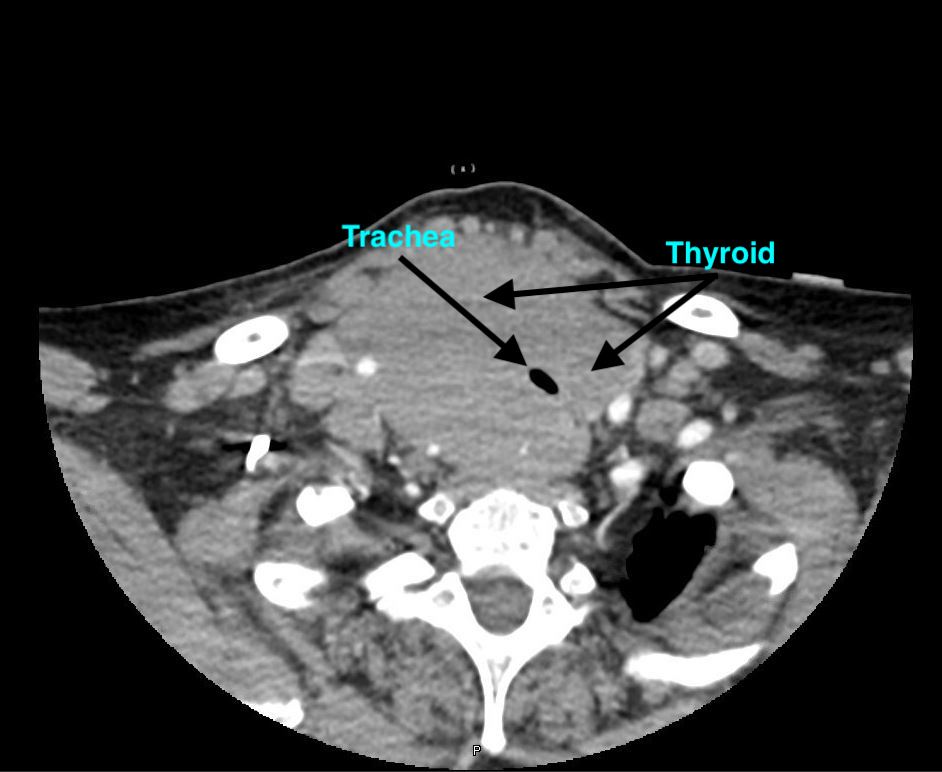 The patient started to decompensate and developed worsening dyspnea and stridor while in the ED. She was intubated for airway protection. Upon intubation, the ED physicians noted resistance while passing the endotracheal tube over the vocal cords. The patient underwent a hemithyroidectomy, since the mass was causing respiratory compromise.

The subsequent pathology results from the hemithyroidectomy were consistent with diffuse large B-cell lymphoma. The annual incidence of this disease is estimated to be 2.1 per million persons, with a 4 to 1 female predominance.3 The only known risk factor for this condition is preexisting chronic autoimmune thyroiditis. This patient’s case is a very typical presentation of thyroid lymphoma; however, the CT finding of thyroid tissue encasing the trachea is pathognomonic for this condition. She was started on the R-CHOP (rituximab, cyclophosphamide, doxorubicin, vincristine, and prednisone) chemotherapy regimen and has been responsive to therapy.