Demons in the Sleep Center: Narcolepsy Mimicking Other Sleep Disorders

Narcolepsy is a chronic neurological disorder that affects how the brain controls sleep patterns. It is characterized by excessive daytime sleepiness and uncontrollable episodes of sleep that greatly disrupt a daily routine. Other symptoms include cataplexy, which is the muscle weakness of rapid-eye movement (REM) sleep triggered by strong emotions while awake, vivid hallucinations, and sleep paralysis.1

Early descriptions of narcolepsy appeared in German case reports during the late 1800s, describing a unique condition that featured both episodes of sleepiness and muscle weakness triggered by excitement.2 Narcolepsy was later recognized as a clinical disorder and named by the French physician Gélineau, after the landmark diagnosis of a wine merchant suffering from daytime drowsiness and sleep attacks.2 However, Gélineau proposed a fairly open-ended definition that did not differentiate the cataplexic symptoms from those associated with somnolence.

In the early 1900s, Löwenfeld was the first to use the term cataplexy in describing muscle paralysis caused by strong emotions.3 The confusion surrounding narcolepsy-cataplexy continued into the 1900s, as further research revealed the association between REM sleep and narcolepsy, leading to the creation of the multiple sleep latency test (MSLT) as a diagnostic tool for narcolepsy.2 The MSLT is used to measure how quickly patients fall asleep in quiet daytime situations.

Due to the variability in its symptoms and similarity to other sleep disorders, narcolepsy can be misdiagnosed. Currently, the disorder affects nearly 1 in 2000 people in the United States and 3 million people worldwide, but it is estimated that narcolepsy is properly diagnosed in only 25% of the individuals who have it. Symptoms typically begin to appear during childhood and adolescence, but people can live with narcolepsy for years before receiving a definitive diagnosis.4

This report describes an interesting case in which a patient presented with symptoms mimicking those of other sleep disorders but in whom narcolepsy was ultimately diagnosed and confirmed with the results of an MSLT study.

A 35-year-old man presented to the clinic with chief concerns of excessive daytime sleepiness and profound tiredness. He works as a physical trainer and had a strong, healthy build with no medical issues. He lives with his wife and 3 children, one of whom is a newborn, and he reported that he often takes care of the children and house due to his spouse’s work schedule. In addition to his domestic duties, he reported having a busy work life, needing to get up very early every day to train clients. He was currently at his highest weight for his lifetime.

On review of symptoms, he reported having gastroesophageal reflux disease, snoring, and memory and concentration difficulty. He also said that his brother has apnea and that both of his parents snore. On physical examination, his body mass index was 31.5 kg/m2, his modified Mallampati score in the passive view was class IV, with only the hard palate visible. He had a thick, short neck. The rest of the examination findings, including the heart and lungs, were normal.

Based on his clinical presentation, especially his symptoms of somnolence and tiredness, his snoring, his comorbidities, and his family history, the patient completed an overnight sleep study to evaluate for obstructive sleep apnea. The study did not demonstrate any significant sleep apnea.

Due to the concern for night-to-night variability in sleep apnea and persistent hypersomnia despite modification of his sleep-wake schedule, another overnight test was conducted to check for apnea once more and then was followed with an MSLT study. The MSLT was ordered to look for a central hypersomnia such as narcolepsy or idiopathic hypersomnia. The patient described previous episodes that were consistent with cataplexy, and he reported that he felt unrefreshed after waking up in the morning but felt better with naps. 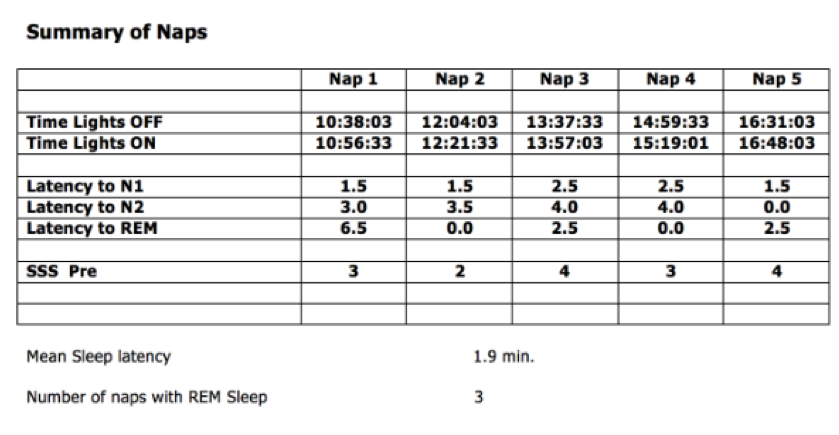 Figure 2. MSLT hypnogram, featuring the 3 of 5 naps with REM sleep. N1, N2, and N3 refer to stage 1, 2, and 3 of NREM sleep, respectively. REM sleep is indicated by the red line, and MT refers to movement time.

These results and the diagnosis of narcolepsy were communicated to the patient during his next follow-up visit in the clinic. During this follow-up, he appeared distraught and agitated over his diagnosis. He reported that during his naps, he was unable to move due to sleep paralysis combined with hallucinations of a “demon” sitting on him. While excessive daytime sleepiness and sleep paralysis could be indicative of other sleep disorders, these vivid hypnopompic hallucinations, which appeared for the first time during the MSLT, further corroborated a diagnosis of narcolepsy.

In summary, although the man presented with symptoms of severe daytime sleepiness and tiredness characteristic of many different sleep disorders, he ultimately received a diagnosis of narcolepsy.