Purpura, Arthralgia, and Acute Kidney Injury in a Patient With Sepsis

Disclaimer:
The views expressed in this article are those of the author(s) and do not necessarily reflect the official policy or position of the Department of the Navy, Department of Defense, or the United States Government.

Three days after the procedure, the patient exhibited persistent fevers with new-onset loose bowel movements and unilateral wrist pain. She also developed a purpuric, nonblanching, mildly pruritic rash affecting her extremities and, to a lesser extent, her trunk (Figure 1). There was no mucosal involvement, cutaneous ulceration, or focal necrosis of the dermis. 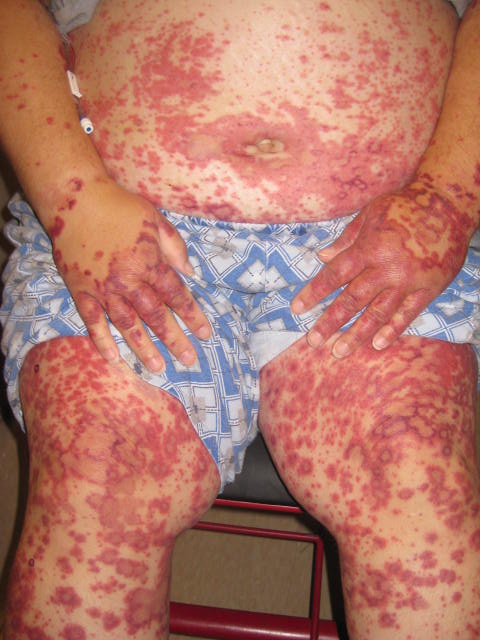 Figure 1. Palpable, purpuric patches and plaques affecting the trunk and the upper and lower extremities in a patient 3 days after administration of intravenous ciprofloxacin.

Laboratory analysis revealed anemia without leukocytosis and an acute kidney injury. The serum creatinine level was 1.5 mg/dL. Urinalysis findings were negative for blood, although proteinuria, glycosuria, and hyaline casts were present. The erythrocyte sedimentation rate was mildly elevated at 45 mm/h. Study results for Clostridium difficile were negative. 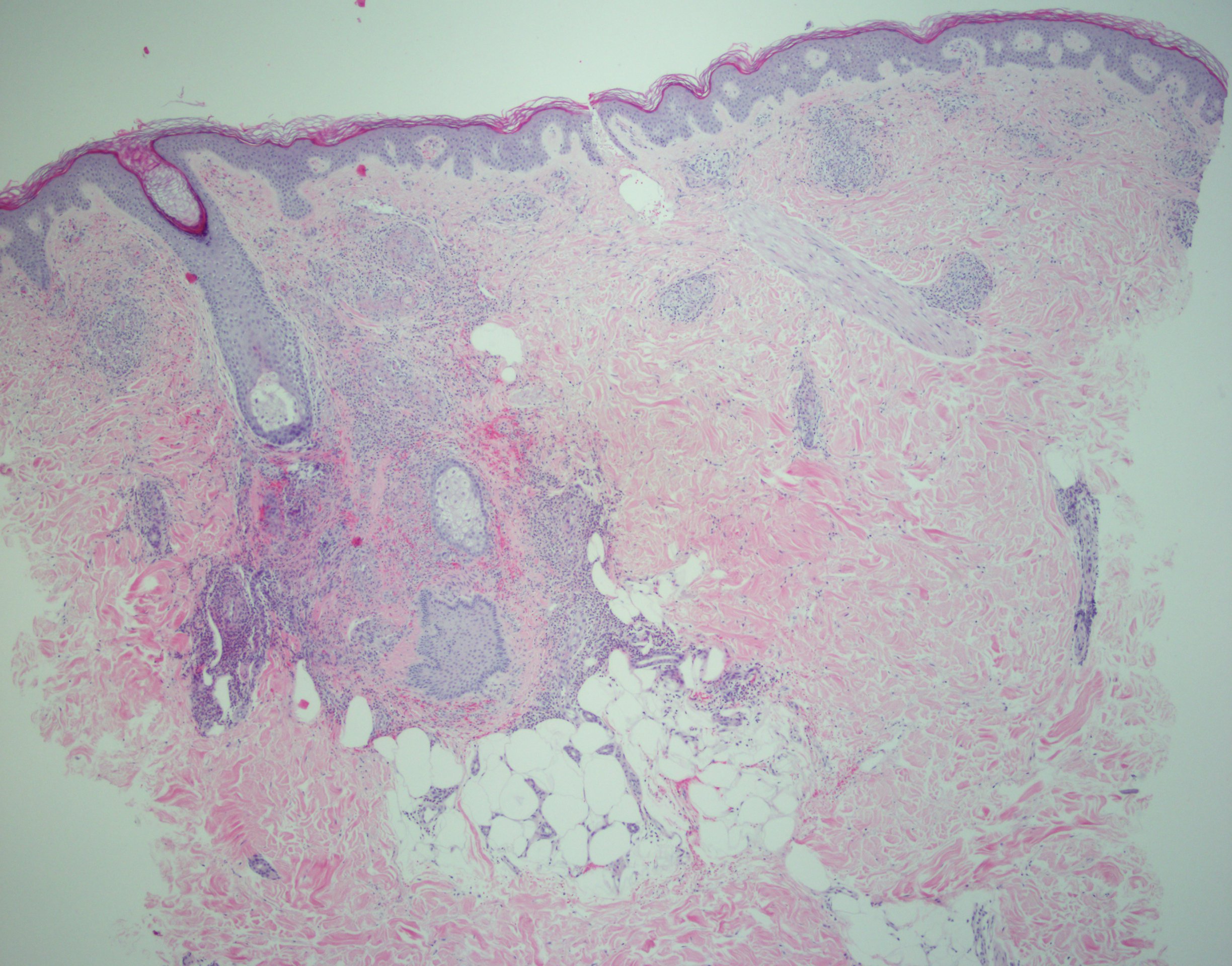 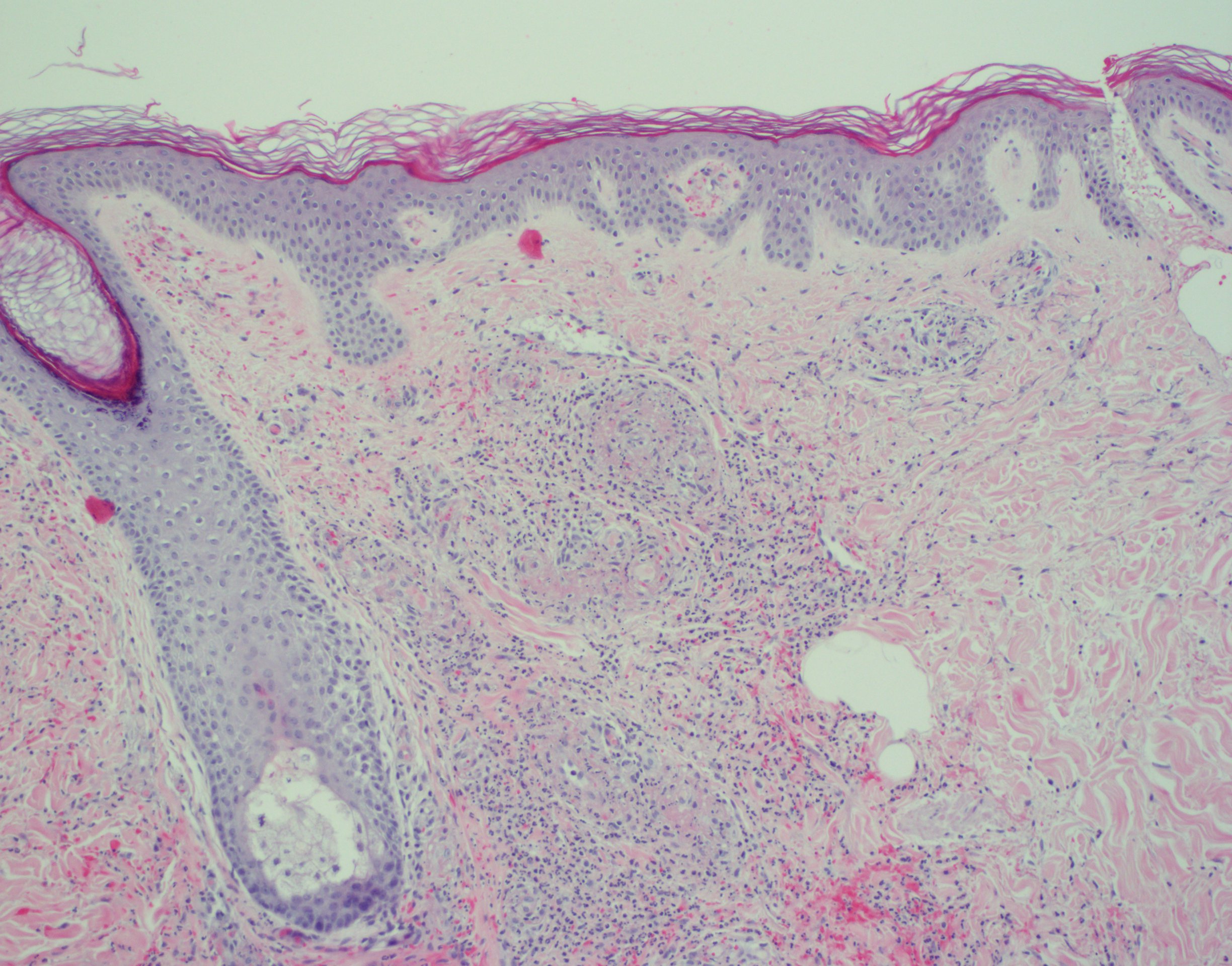 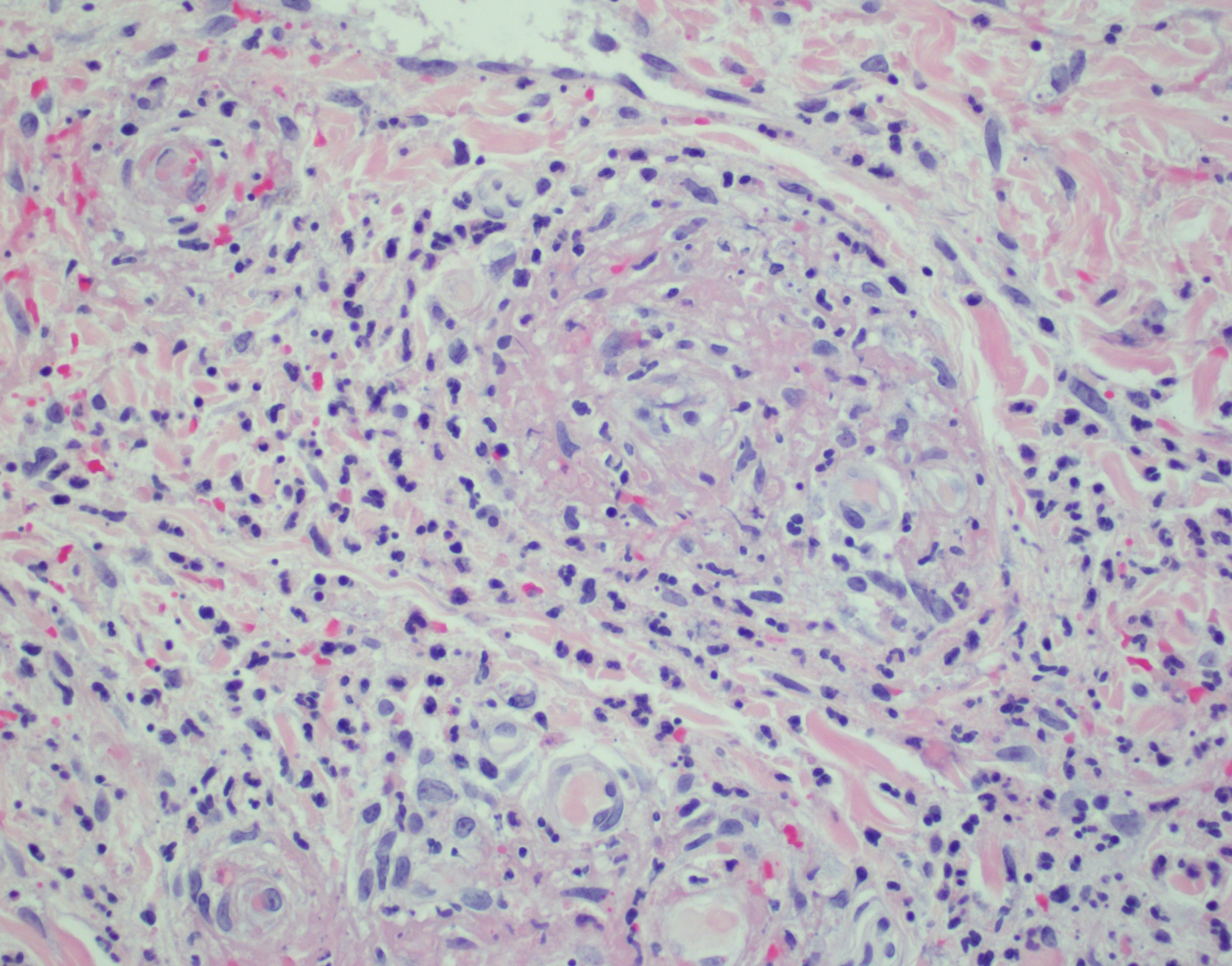 Fluoroquinolones are among the drugs known to induce vasculitis.3 Medication use also accounts for most cases of SJS and DRESS.4,5 However, SJS is more commonly associated with epidermal necrosis and involvement of 2 or more mucosal sites.4 DRESS usually appears several weeks after the first introduction of an offending medication.5 Eosinophilic granulomatosis with polyangiitis may present with cutaneous vasculitis and renal damage; lack of infiltrating eosinophils on skin biopsy demotes this diagnosis.6

The vasculitides are a heterogeneous group of diseases that are commonly grouped by the size of involved vessels, and LCV is the most common small vessel vasculitis. It involves the superficial vessels of the skin, whereas other vasculitides such as polyarteritis nodosa, nodular vasculitis, and giant cell arteritis affect deep muscular vessels found at the dermis-subcutis interface and within the subcutis.7 The skin is frequently involved in both localized and systemic presentations of vasculitis due to its large vascular bed, exposure to relatively colder temperatures, and the presence of stasis, especially in dependent areas.

Cutaneous vasculitis classically presents as palpable purpura but may exhibit a range of severity from simple erythematous lesions to necrosis, deep ulceration, and hemorrhagic blisters.2 Early lesions are largely asymptomatic, but as they mature may become pruritic and painful. Associated edema, especially in the lower extremities or dependent areas, may also occur. Vasculitis may be limited to the skin, or patients may exhibit systemic findings, and end-organ injury can arise secondary to ischemia or infarction.8 This may occur when the vessel wall damage causes hemorrhage and aneurysm formation or intimal hyperplasia leading to stenosis. Commonly affected sites include kidneys, heart, nervous system, gastrointestinal tract, lung, and joints.

LCV is a clinicopathologic diagnosis.9 Early inflammation of the small vessels is caused by a mixed infiltrate comprised mainly of neutrophils in addition to other mononuclear cells. When these leukocytes degenerate, in a process known as leukocytoclasis, the remaining perivascular nuclear debris is noted on histological study.10

It is unknown whether previous use of fluoroquinolones sensitizes a patient to subsequent exposures.11 Cutaneous vasculitis has been reported to occur in ciprofloxacin-naïve patients and in patients who had received ciprofloxacin previously without known reactions.3 This patient had used both oral ciprofloxacin and otic ofloxacin within the past 4 years with no noted reaction. A high index of suspicion is paramount, since drug hypersensitivity is not time- or dose-dependent.12 Objective scales exist to aid in clinical decision making.13

Failure to recognize drug-induced LCV can have dire consequences with regard to morbidity and mortality. Thus, initial management should include immediate cessation of the offending agent.9 A few anecdotal case reports advocate the use of corticosteroids for cutaneous LCV only in the setting of skin necrosis, usually made evident by hemorrhagic blisters or a gray appearance of the epidermis.14 Following removal of the offending drug, formal diagnostic workup should begin while monitoring for clinical change.

Use of the Naranjo Adverse Drug Reaction Probability Scale indicated a probable relationship between the clinical findings and ciprofloxacin therapy in this patient.13 Ten days after discontinuing ciprofloxacin, the presented patient experienced a near-complete resolution of skin lesions with only mild postinflammatory hyperpigmentation remaining. Her acute kidney injury resolved over the following 2 weeks. She continued to experience wrist pain several months following exposure. Radiographic findings were unremarkable, and further workup is ongoing.