A 91-year-old woman presented to the emergency department with a 3-day history fever, chills, and nonproductive cough.

History. History obtained from the patient’s son revealed that the patient had had a syncopal episode 2 days prior to presentation that had resulted in a fall. However, the patient did not have head trauma.

In addition, the patient had a medical history significant for hypertension, chronic obstructive pulmonary disease (COPD), and a 30-pack-year smoking history.

Physical examination. On admission, the patient met the criteria for sepsis. She was febrile with a max temperature of 38.0 °C and tachypneic with a respiratory rate of 30 breaths/min. Results of a chest radiography scan showed bilateral infiltrates with right lower lobe effusion. She was subsequently admitted to the hospital with severe sepsis secondary to bilateral community-acquired pneumonia (CAP).

Diagnostic testing. Because of the fall she sustained, a computed tomography (CT) scan of the head was conducted upon admission, results of which showed lytic skull lesions. This finding, along with elevated calcium levels and mildly decreased kidney function, led to suspicion of possible underlying plasma cell malignancy.

After consulting a hematologist, a urinalysis and blood tests were conducted. Results showed an elevated calcium level at 12.1 mg/dL and elevated parathyroid hormone level at 420 pg/mL. However, all other results were within normal limits. Primary hyperparathyroidism was diagnosed, and the patient was advised to follow-up as an outpatient.

On hospital day 2, CT scans of the chest were performed, results of which showed bilateral lower lobe pulmonary alveolar consolidation, consistent with pneumonia, as well as moderate right pleural effusion, and cardiomegaly (Figure 1). Results also revealed a 1.6-cm, thin-walled lucency and possible bleb in the posterior segment of the right upper lobe, but pneumothoraces were not seen on subsequent scans (Figure 2). Therefore, this finding was nonsignificant. 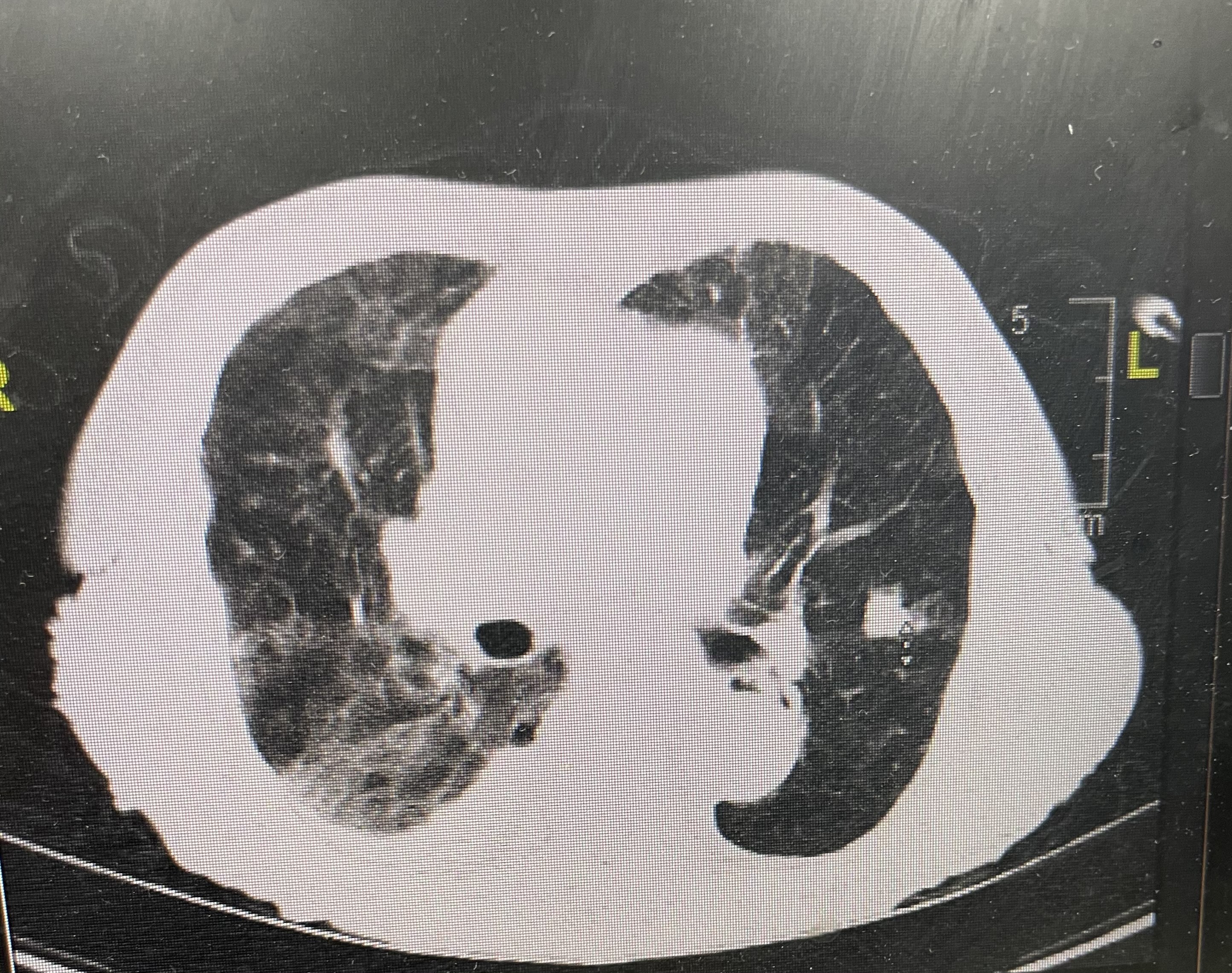 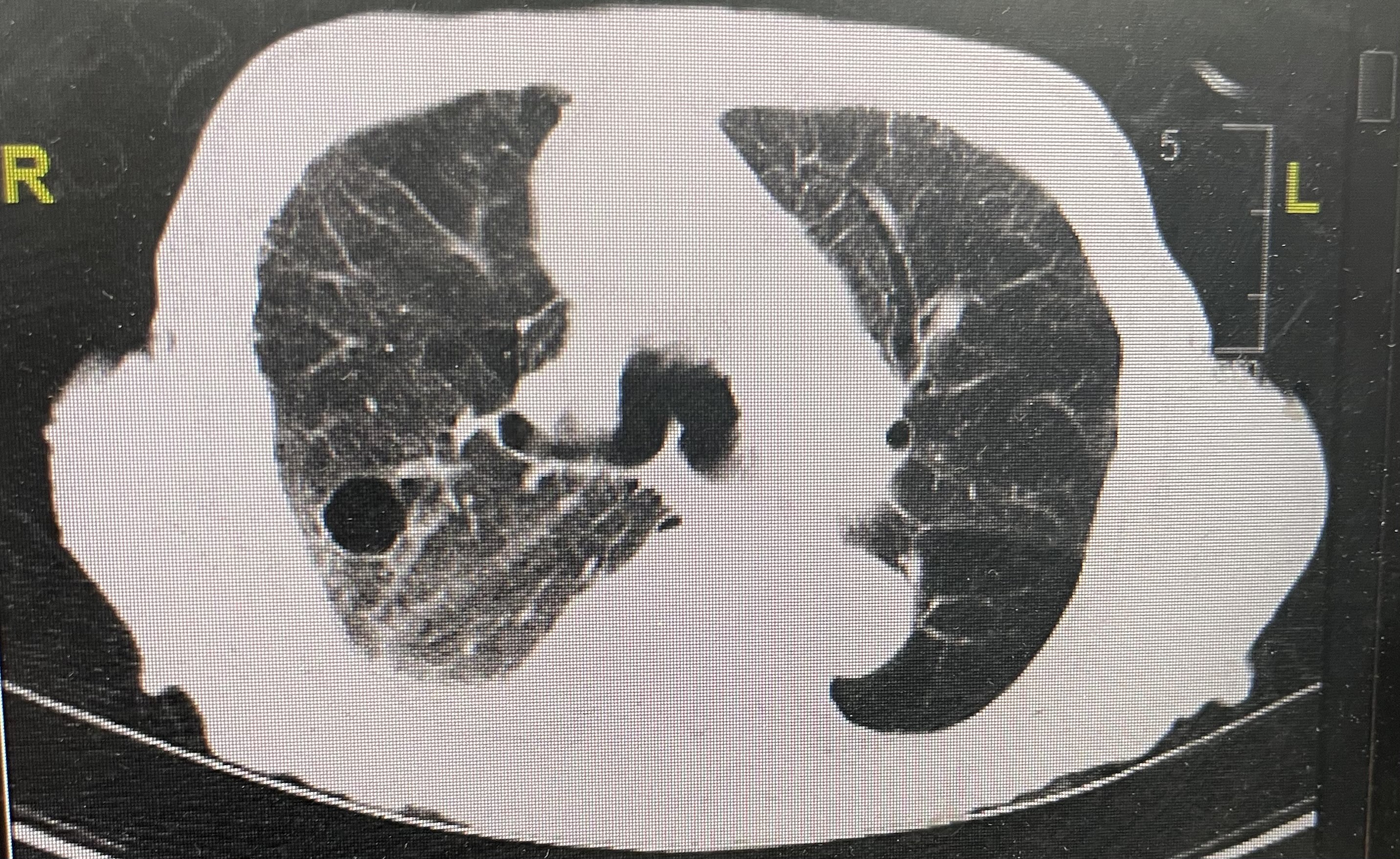 Figure 2: A 1.6-cm, thin-walled lucency was noted in the posterior segment of the right upper lobe, which may represent a bleb or pneumatocele. Faint ground glass opacities were also noted.

Treatment and management. Treatment with intravenous ceftriaxone, 1 g, every 24 hours and intravenous azithromycin, 500 mg, every 24 hours was initiated. However, the patient’s respiratory status deteriorated. Her oxygen saturation decreased to 92% while she was on a 15-L nonrebreather mask, and her arterial blood gas decreased, which was suggestive of hypoxemia. This required initiation of noninvasive ventilation (bilateral positive airway pressure) and medical management in the intensive care unit for hypoxic respiratory failure secondary to bilateral pneumonia in the setting of COPD exacerbation with bacteremia. Because of this, antibiotic therapy was expanded to include intravenous vancomycin, 750 mg, every 24 hours and intravenous meropenem, 1 g, every 12 hours.

Blood cultures collected upon admission returned positive results for Sphingobacterium multivorum sensitive to meropenem, of which the patient completed an 11-day course. Results of a nasopharyngeal methicillin-resistant Staphylococcus aureus screen were negative, and vancomycin was discontinued.

Discussion. S multivorum is a nonfermentative, catalase- and oxidase-producing, Gram-negative bacillus that rarely causes disease in humans.1 It grows on chocolate agar, and its name comes from its cell wall, which is composed of sphingolipids.1 Sphingobacterium can be found in soil and water.1 The few cases of infection that have been reported in humans have been in immunocompromised patients, including those with type 2 diabetes, lung disease, and end-stage renal disease.2 This organism is highly resistant to most antibiotics, and the infection it causes can be deadly if unrecognized quickly. Although rarely reported, infections such as peritonitis, septicemia, chronic respiratory infections in patients with underlying conditions, and colonization of the airway in patients with cystic fibrosis have been reported.2

Our review of previous cases has shown that S multivorum infections were mainly noted among immunocompromised patients with multiple comorbidities. All reported cases of this bacterium causing CAP were among patients with cystic fibrosis.3 Our patient had a longstanding smoking history, hypertension, and chronic obstructive pulmonary disease with suspected undiagnosed malignancy, which could have predisposed her to this bacterium.

In our PubMed literature search, we found 10 cases related to S multivorum reported in the last 33 years. One study, published in 1996, found that 9 patients had shown clinical improvement with subsequent recovery after antibiotic therapy.4 The only patient who did not recover was a middle-aged man with HIV, who was noted to have S multivorum in his cerebrospinal fluid and was treated for bacterial meningitis.4 Another case report focused on a 75-year-old woman who had developed CAP and acute hypoxic respiratory failure from S multivorum bacteremia.5 This contrasts most reported cases, which have been associated with hospital-acquired infections.5

Conclusion. S multivorum is a gram-negative bacterium historically found to have resistance to third-generation cephalosporins and carbapenems due to its unique characteristic of producing extended-spectrum ß-lactamase and metallo-ß-lactamase.2 Further studies are needed to elucidate the exact resistance pattern of this bacterium to antibiotics.

On admission, there was a high clinical suspicion for multiple myeloma, which was later ruled out because of a lack of evidence on serum electrophoresis. Due to advanced age, the patient denied further workup. Although a definitive diagnosis of an immunocompromised state was not made, it is our strong suspicion that our patient likely had an underlying malignancy given clinical findings, including lytic bone lesions, hypercalcemia, and S multivorum bacteremia.

Patient outcome. Repeat blood cultures collected on hospital day 3 returned negative results for bacteremia, and the patient was discharged on hospital day 16 with a 3-day course of oral antibiotics (oral trimethoprim, 400 mg, and sulfamethoxazole, 80 mg, daily). Despite aggressive intervention, the patient remained hypoxic at the time of discharge and met criteria for home oxygen.