AUTHORS:
Ivana Choudhury, DO • Nushra Paracha, DO • Vladimir Orlov, DO • Asadullah Siddiqui, DO • Jason Wentzek, DO • Sandeep A. Gandhi, MD

Clinical examination findings were significant for a grade 2 systolic murmur auscultated in the second intercostal space, along with poor dentition. The physical examination did not reveal Janeway lesions, Roth spots, splinter hemorrhages, or petechiae.

On day 1 of hospitalization, a hemoglobin decrease of 2.0 g/dL was noted. Due to the acuity of the drop, an internal bleeding source was suspected, most likely gastrointestinal tract hemorrhage. A gastroenterology consult was called, and the patient was placed on a proton-pump inhibitor drip; however, esophagogastroduodenoscopy and colonoscopy could not be performed because of newfound bacteremia.

On day 2 of hospitalization, a computed tomography (CT) scan of the chest, abdomen, and pelvis was done. An area of a suspicious hyperlucency was identified in the thoracic vertebrae, which was concerning for osteomyelitis. Magnetic resonance imaging (MRI) was ordered for further assessment, the results of which revealed acute osteomyelitis and diskitis at the level of T5-T6, focal severe canal stenosis without evidence of epidural expansion at T9-T10, focal severe canal stenosis at L3-L4 with suggestion of epidural expansion, and a small abscess in the left psoas.

Blood cultures in two bottles grew Streptococcus mitis, sensitive to ceftriaxone, clindamycin, and erythromycin. Given the patient’s history of having undergone TAVR, a transthoracic echocardiogram was obtained, which revealed prosthetic valve endocarditis (PVE). A follow-up transesophageal echocardiogram revealed an erratically moving echodensity consistent with a vegetation, with an adjacent echolucent mass measuring 0.8 × 0.6 cm in the descending proximal aorta, suggestive of a descending intra-aortic abscess (Figure). The patient was transferred to a tertiary care center to be evaluated by a cardiothoracic surgeon and subsequently was lost to follow-up. 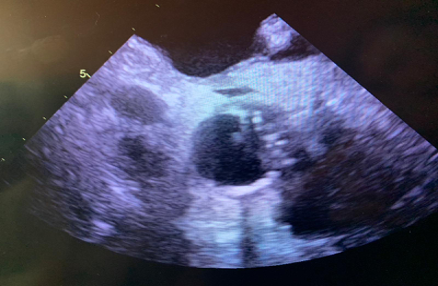 Figure. A transesophageal echocardiogram showed the descending proximal aorta to have an echolucent mass measuring 0.8 × 0.6 cm, suggestive of a descending intra-aortic abscess.

Transcatheter aortic valve replacement (TAVR) is a treatment for severe aortic stenosis; however, PVE is a rare but serious potential complication after TAVR.1 The risk factors for PVE include prior infective endocarditis (IE), the presence of a prosthetic valve or cardiac hardware/device, and a history of valvular or congenital heart disease. Noncardiac risk factors such as intravenous drug use, indwelling intravenous lines, immunosuppression, or a recent dental or surgical procedure must also be considered.2

Large vegetation size once had been considered a risk factor for perivalvular abscess; however, recent studies have shown no correlation between vegetation size and the presence of a perivalvular abscess.5,6 Interestingly, patients with congenital bicuspid aortic valves appear to be more prone to aortic root abscesses, pseudoaneurysms, and aorta cavitary fistulas than those with IE involving the tricuspid aortic valve.7

An association has been documented between IE and vertebral osteomyelitis (VO). In patients with IE, osteoarticular infections tend to involve the axial skeleton.8 Viridans streptococci are the organisms most associated with VO in the setting of IE, but it can also be caused by Staphylococcus aureus or non-viridans Streptococcus species.

Patients with S aureus– and viridans streptococci–induced IE were found to have a higher rate of intracardiac abscess.9 Our patient had IE secondary to S mitis, which is another well-known bacterial source of IE. S mitis are gram-positive, α-hemolytic cocci belonging to the viridans streptococci group, which typically colonize the oral cavity and nasopharynx. Our patient’s poor dentition was likely the source of the S mitis bacteremia due to inflammation and ulceration of the gingiva, allowing the bacteria to enter the bloodstream.10

It is important to note that post-TAVR PVE may not present with the classic diagnostic signs of the Duke criteria (Table),11 which have a low sensitivity for PVE.12 While our patient had echocardiographic evidence of endocardial involvement, he only had 1 set of blood cultures positive for IE. In this case, the second set of blood cultures were drawn 48 hours after the initiation of broad-spectrum antibiotics. With the lack of vascular or immunologic manifestations, our patient only met 1 major criterion and 2 minor criteria, classifying this case as possible IE according to the Duke criteria. Since the Duke criteria are not always met on initial evaluation, clinicians should have a high index of suspicion in a patient with a recent BAVR who meets sepsis criteria on admission with no immediate source of infection. 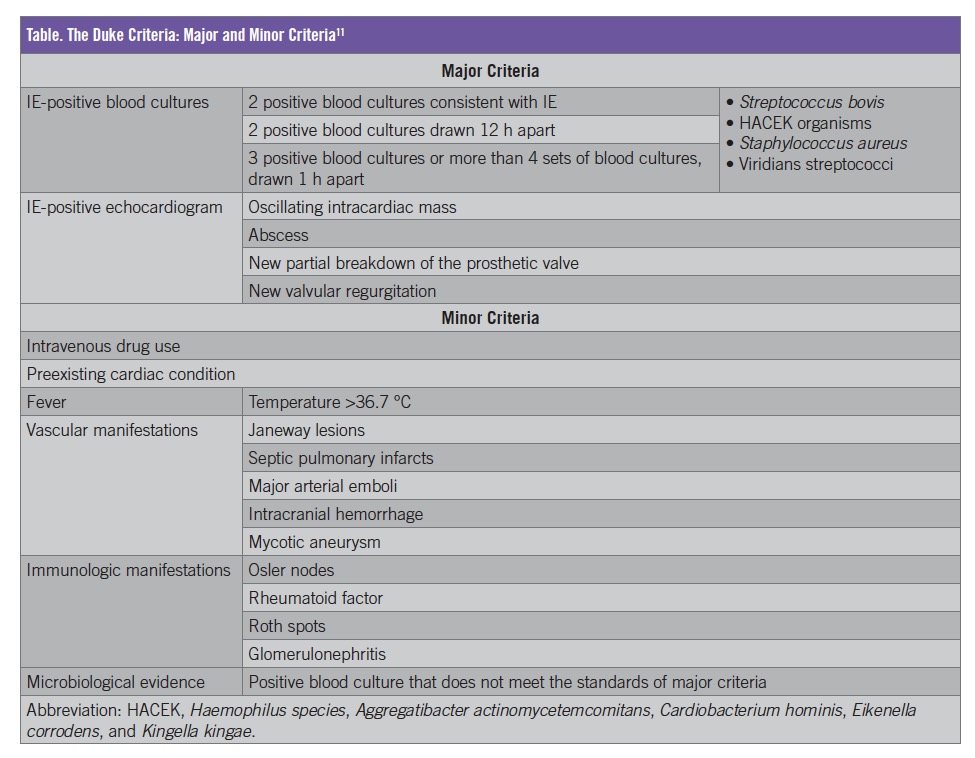 Our patient’s case was a unique case of IE complicated by an aortic root abscess and VO after BAVR. It is imperative to consider the consequences of bacteremia and the results of hematogenous spread. Broad-spectrum antibiotics should be initiated, and the patient closely monitored with inflammatory marker tests and constant reexamination. While the incidence of abscess formation at distal sites is low,15 it should always remain in the differential diagnosis, since the course of therapy may need to be drastically altered, and surgical intervention for abscess removal and tissue debridement may be warranted. The difficulties in making an early diagnosis are responsible for the residual high mortality in undiagnosed intravascular and other distant abscesses,16 despite a course of broad-spectrum antibiotics.