An 84-year-old man presented to the emergency department for 6 months of progressive headache, blurry vision, and chemosis. He had been seen by numerous physicians and had received a diagnosis of conjunctivitis and glaucoma; however, typical treatments for these conditions had failed to alleviate his symptoms. His eyes had become progressively more swollen and bulging, which further limited his vision. He also reported having a humming in his head that had been keeping him up at night.

Cerebral angiography was performed, the results of which showed bilateral carotid cavernous fistulas (CCFs) supplied by both the external and internal carotid arteries (Figure 2). Right and left common carotid injection showed numerous arterial feeders arising from the internal maxillary, ascending pharyngeal, and posterior auricular arteries that were supplying the cavernous sinus (CVS). The cerebral angiogram also revealed multiple branches arising from the cavernous and petrous segments of the internal carotid artery, contributing to the fistula. 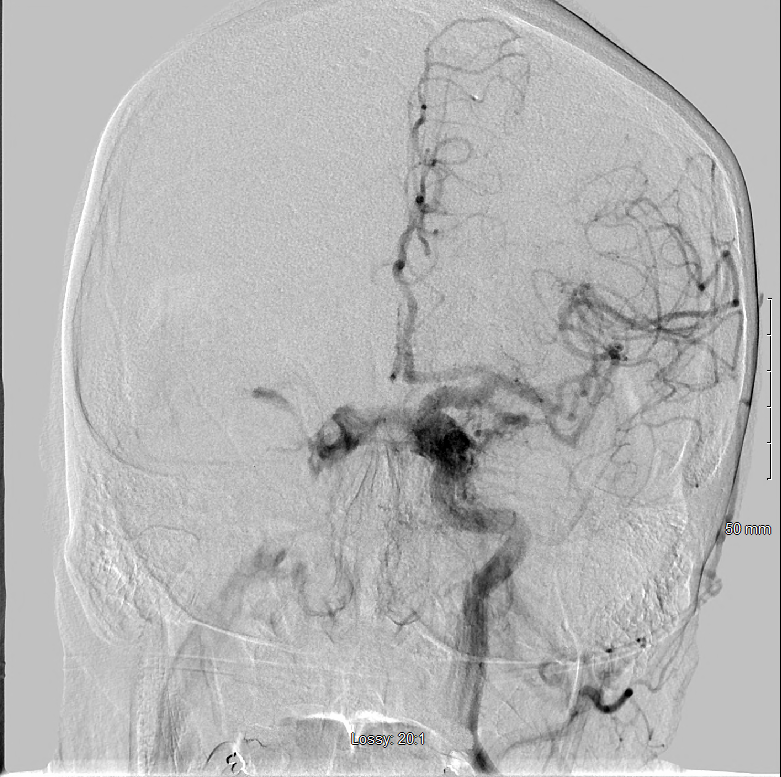 Repeated cerebral angiography showed extensive communication between the external and internal carotid arteries and the CVS, consistent with an indirect CCF draining into the right inferior petrosal sinus and superficial ophthalmic vein. The CCF was additionally noted to be draining into the contralateral CVS.

Discussion. CCFs are abnormal connections between the carotid arteries and the CVS. They can be classified anatomically (direct vs indirect), by flow (high flow vs low flow), or etiology (spontaneous vs traumatic).

Direct CCFs typically result from trauma. These higher-flow lesions usually present with more-acute and pronounced symptoms, such as the triad of chemosis, pulsating exophthalmos, and bruit.1 The increased pressure within the CVS results in varying degrees of chemosis, elevated IOP, proptosis, and various cranial nerve palsies. Other symptoms include diplopia, red eye, headache, orbital pain, and tinnitus.

Indirect CCFs are classically seen in postmenopausal women. The etiology is poorly understood, but some sources favor the theory that indirect fistulas can form following the rupture of small arteries.2 Risk factors include atherosclerosis, hypertension, and collagen vascular disorders. These connections involve the smaller dural branches of the carotids, resulting in lower-flow lesions and a more gradual presentation.

CCFs can be very challenging to diagnose, and patients often undergo treatment for more-common causes of red eye such as glaucoma, conjunctivitis, and trauma. Some of the more worrisome features such as increased IOP, ophthalmoscopic abnormalities, and nerve palsies may not present until later in the disease course. Vision loss is a feared complication and is perhaps one of the most important reasons to make this diagnosis. Vascular engorgement of the venous system can compress the retinal artery and nerves, leading to permanent damage. Proptosis may also lead to corneal injury and permanent vision loss.

Treatment decisions are complex but often revolve around vision changes, making serial eye examinations a vital component of CCF management before and after treatment. It is important to keep in mind that any space-occupying process within the CVS may impede vascular flow and present similarly. Some of these differential diagnoses include tumors, infiltrative processes, and CVS thrombosis.

Most imaging modalities, such as computed tomography (CT), CT angiography, magnetic resonance imaging, and transcranial ultrasonography, can identify CCFs; however, the gold standard for diagnosis and treatment is angiography.

Therapies for CCFs depend on symptoms and the patient’s vascular anatomy. Elevated IOP may be treated medically, but definitive treatment is typically with embolization. Endovascular ablation can be achieved with coiling, ballooning, alcohol, or liquid adhesives. Direct CCFs are unlikely to close spontaneously and tend to have more-severe symptoms warranting invasive management, typically transarterial embolization. Indirect CCFs frequently close spontaneously, so invasive options should be carefully approached with each patient. Indirect CCFs involve smaller, more tortuous feeding vessels most commonly treated with a transvenous approach. Neurosurgery and radiosurgery are alternative therapies should endovascular treatments fail. Our patient opted for transvenous coil embolization.

The prognosis is generally good. Indirect CCFs have a reported endovascular cure rate of approximately 80%.3 Ocular pressure-related symptoms often resolve in hours to days after treatment, while nerve deficits may take longer. Recanalization of an embolized CCF is rare but may occur. Serial eye examinations are required to evaluate for recurrence and resolution of symptoms. Nerve-related injuries and vision changes may take months to resolve, and patients may have residual symptoms.