Bezoar as a Result of Plastikophagia

An 18-year-old young man presented to the emergency department (ED) with concern for a 10-day history of vomiting. His past medical history was significant for consanguineous birth, autism spectrum disorder, pectus carinatum, developmental delay, and 1 episode of pancreatitis 2 years ago.

History. The patient had been evaluated in the ED for a history of intermittent emesis on 2 previous occasions. At the first evaluation, he had nonbloody, nonbilious emesis for 3 days without any associated diarrhea or fevers; he was given an antiemetic, after which he tolerated oral intake, appeared well, and was subsequently discharged home. Two days later, he presented again, this time for continued intermittent emesis with increasing frequency (up to 10 bouts daily) and constipation. Despite continued intermittent emesis, the patient appeared to be very happy and playful according to his parents, and thus he was discharged home with prescriptions for an antiemetic and stool softeners.

At the current ED visit, at day 10 of illness, he presented with persistent vomiting and decreased urine output. The parents continued to deny fever, diarrhea, or sick contacts; however, they now reported mild signs of abdominal discomfort in the boy.

Physical examination. At baseline, the patient was minimally verbal but ambulated well and responded to basic questioning. Vital signs were stable, and physical examination findings were notable for mild epigastric tenderness without focal appendiceal or peritoneal signs.

Given these findings, the patient underwent abdominal ultrasonography, the results of which were significant for complete obscuration of the pancreas with a prominent degree of shadowing over the mid-abdomen. An abdominal radiograph was then obtained, which revealed a large amount of abnormal mixed attenuated material in the stomach, extending into the bowels at the level of the left paramedian mid-abdomen and right lower quadrant, suggestive of bezoar associated with Rapunzel syndrome (Figures 1 and 2). 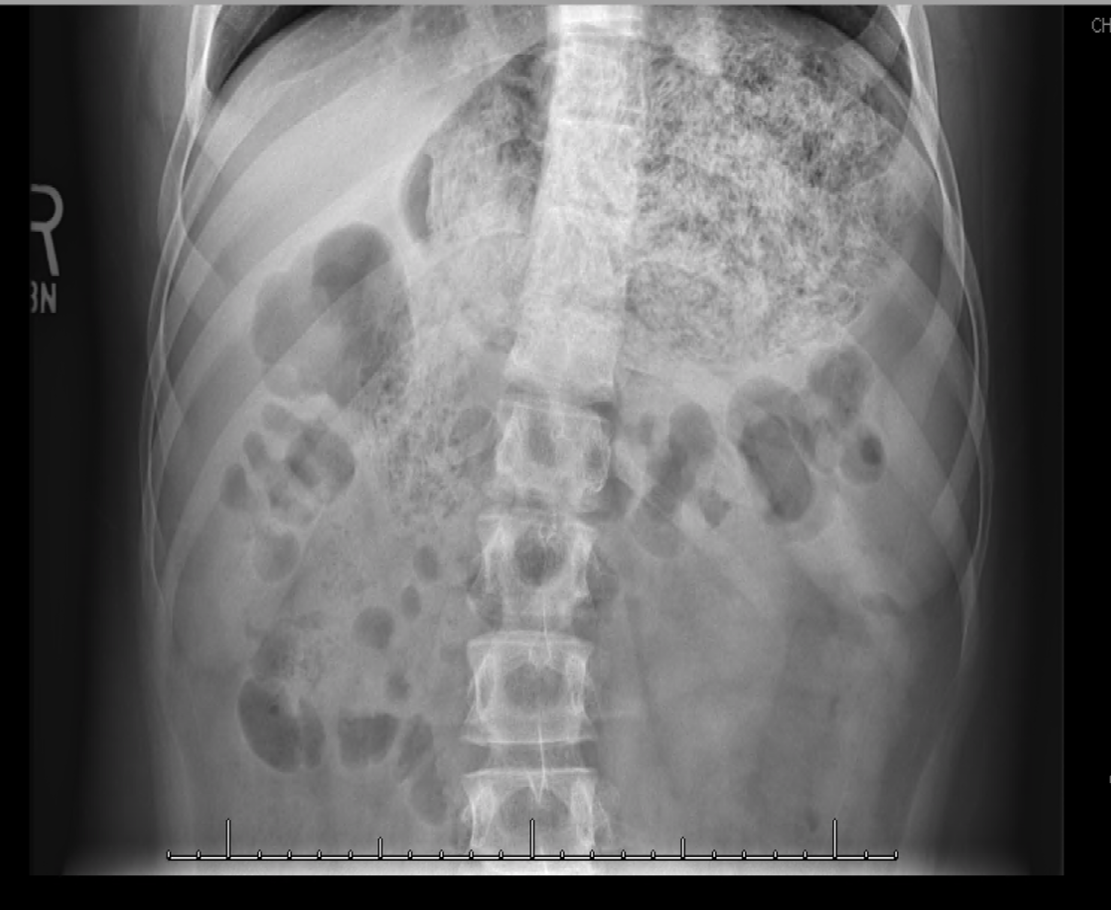 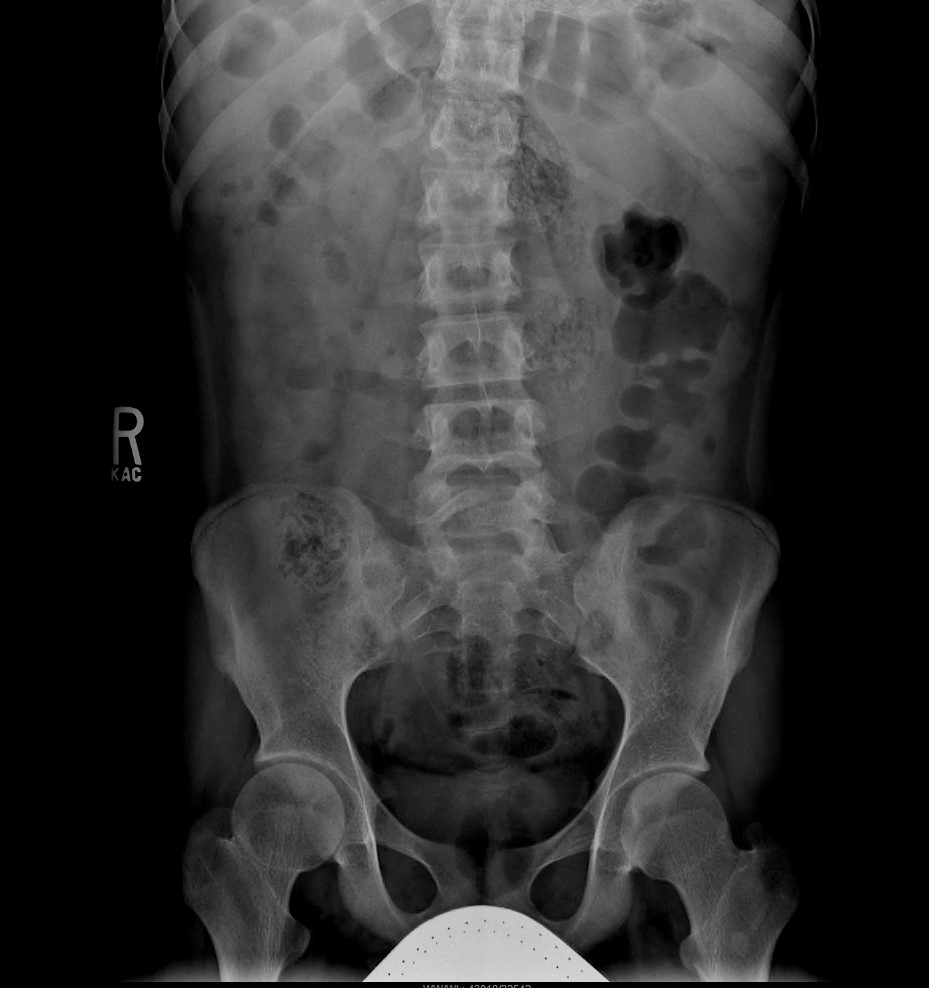 Figures 1 and 2. Abnormal mixed attenuated material in the stomach, extending into the bowels at the level of the left paramedian mid abdomen and right lower quadrant.

Outcome of the case. On further questioning, the parents reported that the patient had a remote history of ingesting plastic bags. Given the extent of the retained foreign materials, both the gastroenterology and general surgical services planned for a combined procedure for extraction.

The patient underwent a therapeutic esophagogastroduodenoscopy the next day; however, out of concern for esophageal swelling from repeated scope reentry, the case was converted to an exploratory laparotomy. A significant amount of partially digested plastic grocery bags and gloves was retrieved successfully from the patient (Figures 3 and 4). 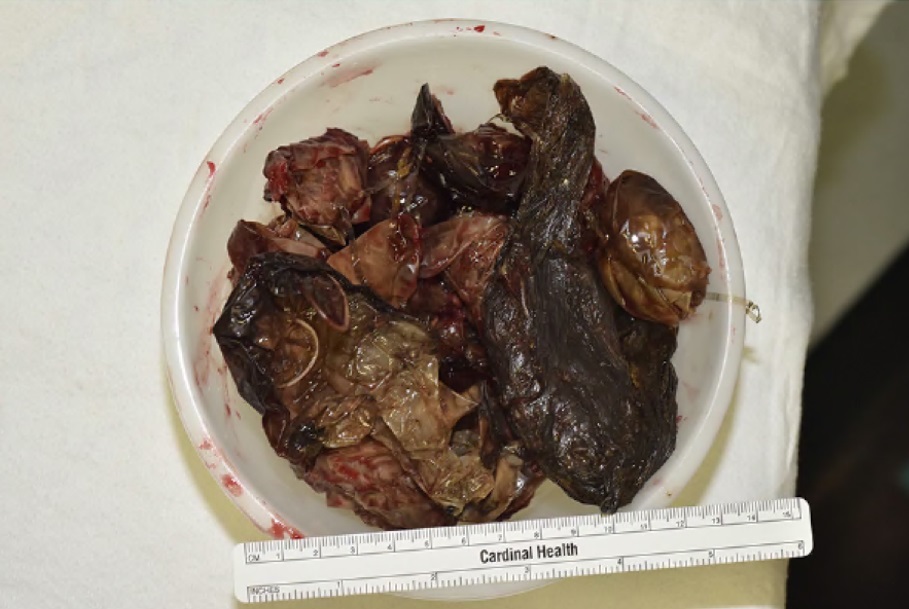 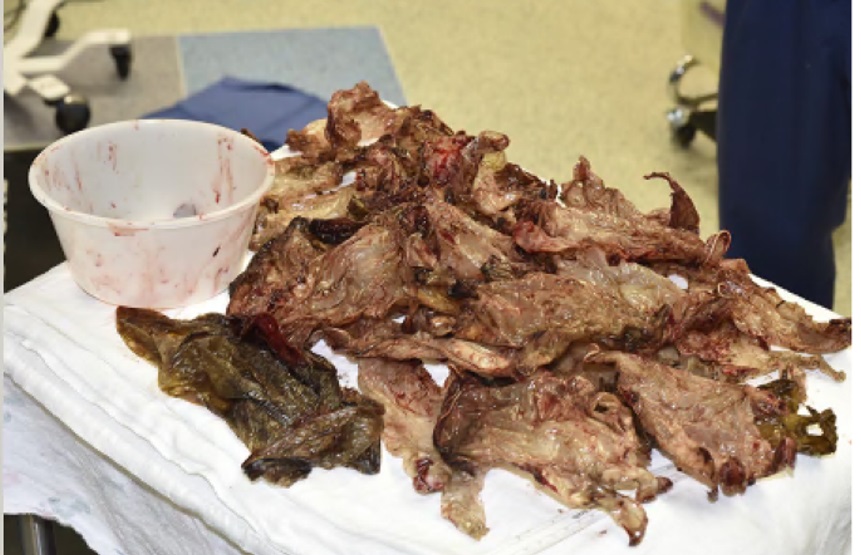 Figures 3 and 4. Large amounts of plastic debris retrieved from the patient’s abdomen during exploratory laparotomy.

The patient’s postoperative course was complicated by persistent tachycardia on postoperative day 2, with return to the operating room the next day. He underwent a repeated exploratory laparotomy, which revealed large amounts of turbid particulate fluid within the abdominal cavity. The fluid cultures were positive for Candida albicans. The patient completed a 25-day hospital stay, complicated by delayed wound healing and concern for continued ingestion of foreign bodies while in the hospital, all while on broad-spectrum antibiotics and antifungal medications.

Discussion. Bezoars result from an accumulation of undigested material usually found as a hard mass or concretion in the stomach.1 Bezoar is a relatively rare cause of nonspecific abdominal symptoms, with an incidence as high as 0.4% in all populations.2 The word bezoar is derived from the Arabic word bazahr, which means “antidote” or “counterpoison.” Bezoars are found in the guts of animals such as goats and until the 19th century were thought to be useful in counteracting many poisons.3

Bezoars are classified based on the material they are made of. The most common types are phytobezoars, made from plant material, and trichobezoars, made from a clump of undigested hair. Other types include pharmacobezoars, made from drugs such as enteric-coated aspirin, and lactobezoars, made from neonatal formula.4 Bezoars made of plastic are a relatively rare occurrence and are a direct result of the patient’s having plastikophagia. Predisposing factors include previous surgeries, pica, psychiatric illness, and developmental delay.5-7

Patients with a bezoar usually present with vague, nonspecific symptoms such as vomiting, abdominal pain, and fever, which often makes the diagnosis difficult. The complications from bezoars can be serious and may include small bowel obstruction, gastrointestinal tract perforation, peritonitis, protein-losing enteropathy, anemia, pancreatitis, intussusception, constipation, pneumatosis intestinalis, and appendicitis, to name a few.8 Plain radiographs can identify opaque objects or any distention in the gastric antrum. This, in association with dilated small bowel loops, could indicate the material to be extending into the small bowel, also known as Rapunzel syndrome.9

Management. Management can include chemical dissolution, using agents such as cola10 or N-acetylcysteine; however, this method carries a potential for risk of partial dissolution and thus persistence of symptoms. Endoscopic removal of the foreign objects has a good success rate if the bezoar is small enough. Exploratory laparotomy is indicated in patients who present with large bezoars that extend into the small bowel ore with signs of obstruction, perforation, or hemorrhage.9