ACKNOWLEDGEMENT:
We thank Vijayalakshmi Padmanabhan, MD, for her assistance in the pathologic diagnosis and Courtney Miller-Chism, MD, for her oncology expertise.

A 64-year-old Nigerian man with no pertinent medical history was admitted to the hospital for evaluation of the recurrence of a painful left axillary nodule.

History. The patient had first noticed the mass several years prior, and it had progressively enlarged until 1 year ago, when he had undergone an axillary lymph node dissection in Nigeria. The patient had been told then that the pathology results were negative for malignancy, and that the mass likely was the result of an inflammatory process.

Nevertheless, the mass had recurred, accompanied by stabbing left axillary pain and arm swelling. Ultrasonography scans revealed a left subclavian and axillary deep-vein thrombosis (DVT). An anticoagulant was started, but the pain did not improve.

Seven days later, the patient visited an emergency department after having developed severe left inguinal “bone” pain radiating down his leg. Hip and femur radiographs were unrevealing, and he was subsequently discharged home.

Physical examination. On the current admission, the patient noted that the axillary nodule had grown and had become significantly more painful over the past 2 months. The patient denied fever, chills, and weight loss, and the results of a complete review of systems were negative. He was afebrile, and his vital signs were stable. Physical examination revealed an edematous left axilla with prior scarring and a 2-cm firm nodule with mild tenderness in the inferior axilla. On palpation of the left breast, no masses or tenderness were appreciated. 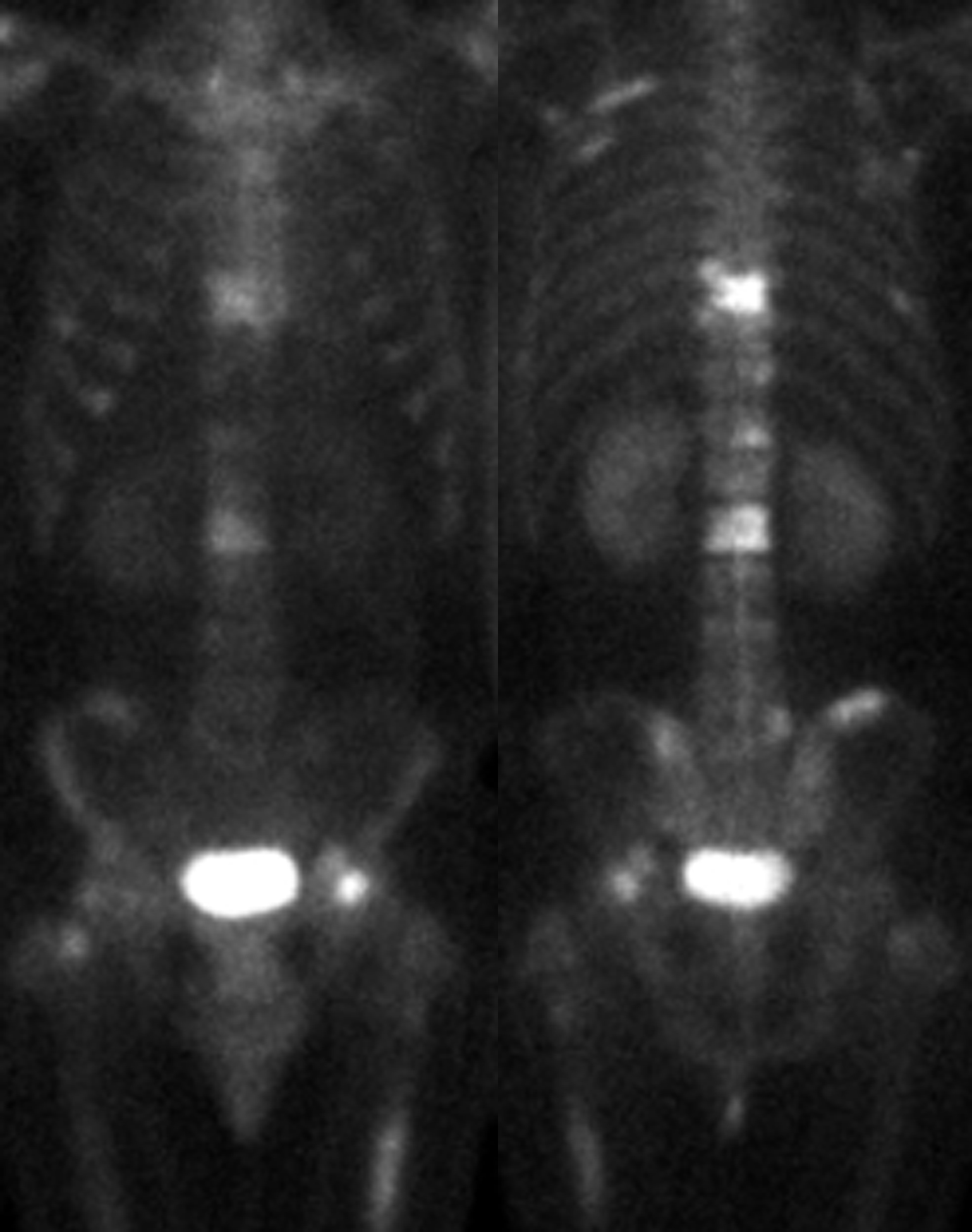 MRI of the thoracolumbar spine confirmed multiple spinal metastatic lesions and revealed extraosseous and epidural extension at T9 and L2 (Figures 4 and 5). MRI of the brain showed no evidence of intracranial metastasis. Diagnostic mammography showed a 5-mm focal asymmetry in the left breast, later identified as a lymph node on ultrasonography. 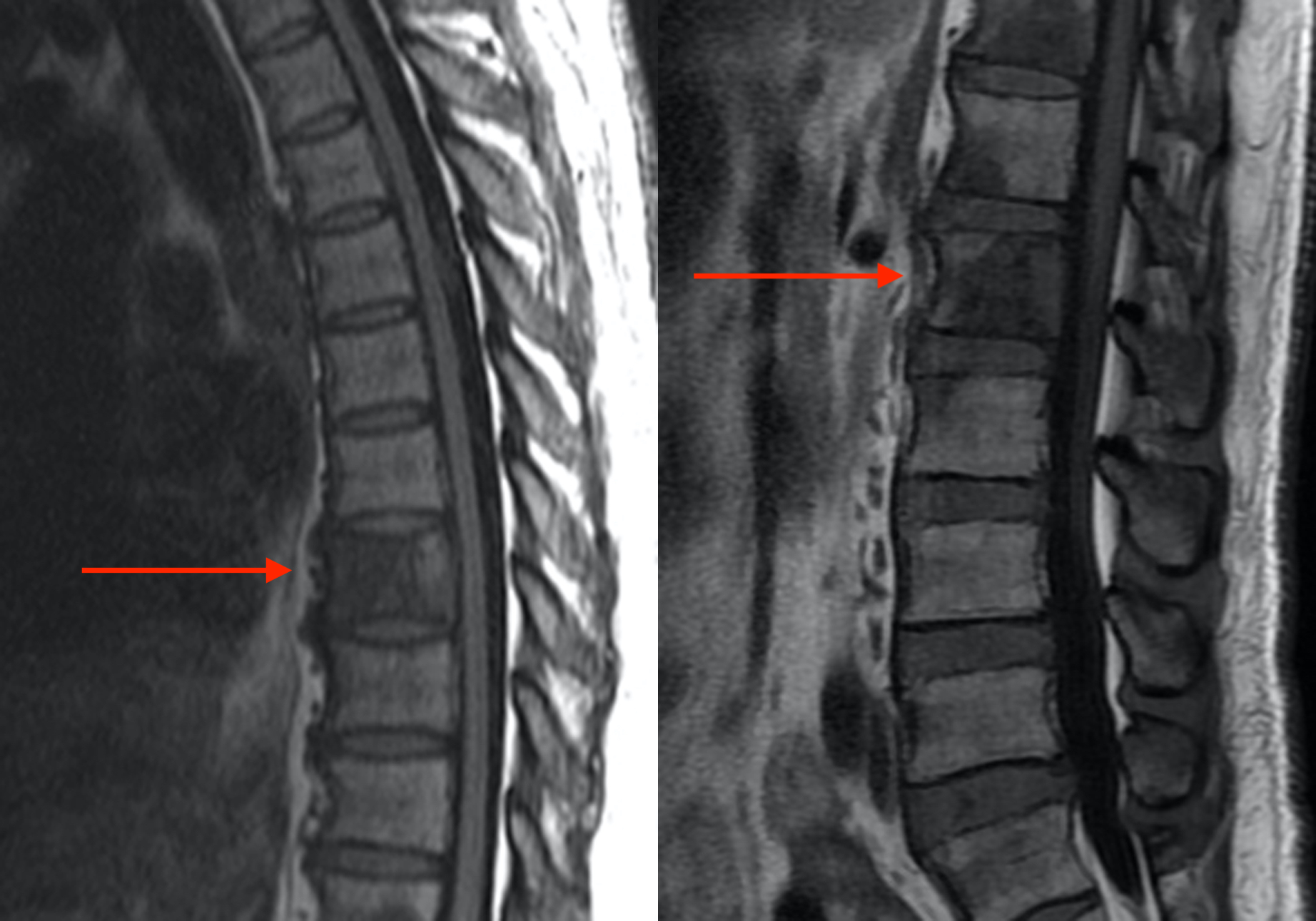 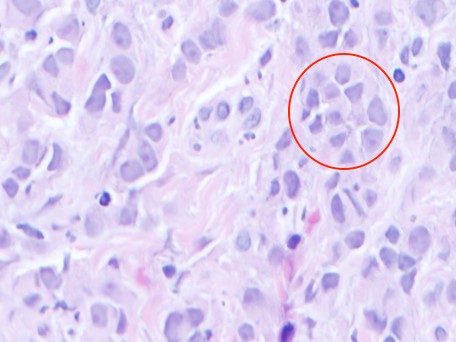 Figure 6. Diffuse involvement of a monotonous population of atypical cells, either isolated, forming single strands, or small tumor nests. The nuclei are round, central to eccentric, with prominent nucleoli (hematoxylin-eosin; original magnification ×40). 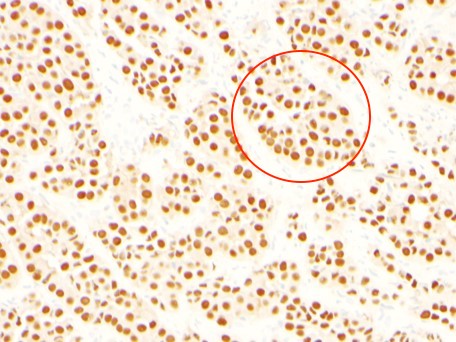 Treatment. The oncology team opted to initiate treatment with goserelin plus letrozole. The patient also underwent bronchoscopy with endobronchial ultrasound-guided biopsy of the mediastinal lymphadenopathy, the results of which also confirmed the diagnosis.

While nonsteroidal aromatase inhibitors such as letrozole are not the usual first-line treatment for male breast cancer, tamoxifen citrate, an estrogen modulator, was not used, given the patient’s recent DVT diagnosis. These endocrinologic treatments were strongly indicated in this patient due to his 95% positive strong intensity for estrogen receptors and 60% positive moderate intensity for progesterone receptors. The patient subsequently underwent genetic testing for common gynecologic and breast cancer genes due to the high prevalence of male breast cancer occurring in those with a familial mutation, such as BRCA1 and BRCA2.5 Results of these tests were negative, but a variant of unknown significance was found in the ATM serine/threonine kinase gene (ATM) that currently is not linked to cancer.

In addition, the patient continued anticoagulation for treatment of the DVT and was started on bisphosphonates, since breast cancer frequently metastasizes to the skeleton, interfering with bone remodeling. The patient is currently continuing treatment with goserelin plus letrozole and will be evaluated for radiation therapy for treatment of the spinal metastases.

Discussion. Occult breast cancer is typically defined as axillary metastasis without a clinically or radiologically identified primary breast tumor. Although men make up less than 1% of all diagnosed breast cancer cases, the incidence has increased in recent years.1,2 Moreover, it is especially prevalent among men of African descent, such as our patient, and is associated with a worse prognosis among that population.3

Pathology tests generally reveal hormone-receptor–positive tumor cells, with one international 20-year retrospective analysis reporting estrogen-receptor positivity in 99.3% of cases, progesterone-receptor positivity in 81.9% of cases, and androgen-receptor positivity in 96.9% of cases.4 Additionally, since invasive ductal carcinoma has less tissue to traverse in men, it is more likely to metastasize at a faster rate.5 Accelerated metastasis, in combination with a lack of awareness and a paucity of screening in at-risk men, often leads to late diagnosis and therefore poor disease prognosis. Common risk factors include advanced age,6 cancer-prone genetic mutations (most notably, BRCA2),7 and conditions that affect estrogen levels, such as obesity,8 alcoholism,9 and Klinefelter syndrome.10

Our patient’s initial presentation of a recurrent axillary nodule with osseous metastasis had a wide differential diagnosis. Despite his prior negative pathology on lymph node biopsy in Nigeria, the rapid growth of the mass was still highly concerning for malignancy. Extensive lymphadenopathy, in conjunction with multiple osseous lesions and lung nodules on CT, confirmed our suspicion for malignancy and prompted further evaluation to determine the primary etiology. When considering extensive vertebral metastases in a man of this patient’s age, likely differential diagnoses included lung or prostate cancer, osteosarcoma, and lymphoma. However, markers for these lesions were negative on pathology tests. It was also important to consider other cancers that are known to spread to bone, such as cancer of the kidney, thyroid, and, as in this case, breast. Further pathology evaluation yielded a strong intensity of estrogen receptor expression and intermediate intensity of progesterone receptor expression, classic findings for male breast cancer.

Although breast cancer in men is unusual, it is important for clinicians to recognize that it may present as an axillary nodule without a distinct breast mass. In addition, it should be considered as a potential cause of cancer of unknown primary in those with metastatic disease, especially in patients of African descent or patients with other underlying risk factors.

In our patient’s case, inaccurate diagnosis when he had the axillary mass excised initially was likely a missed opportunity for potential cure. Most of our understanding of male breast cancer comes from research based on its female counterpart. Further studies on this topic in men may reduce late diagnosis in high-risk patient populations and inform best practices for treatment in the future.