An 8-year-old boy with a history of psoriasis presented to the pediatric emergency department (ED) for evaluation of 6 days of headache and fatigue.

History. The boy had a history of headaches during the past year; however, he described this episode as feeling different. He described the new headaches as occipital, sharp, intermittent, and varying in intensity from 5 to 9 on a 10-point scale. He reported mild photophobia without phonophobia. He also had had 3 episodes of nonbloody, nonbilious vomiting on 3 separate mornings. His mother had noted that his urine had been darker than usual. He had not reported any vision changes. He had not had any recent illnesses or infections. His family history was notable for a grandmother with psoriasis, a maternal grandmother with migraines, and a paternal uncle with a history of multiple sclerosis (MS).

Diagnostic tests. Initial laboratory evaluation revealed a low hemoglobin level of 7.0 g/dL with a mean corpuscular volume of 75.6 µm3 (reference range, 77-95 µm3). The results of a comprehensive metabolic panel were normal except for an elevated bilirubin level of 2.5 mg/dL. Further evaluation revealed a normal lactate dehydrogenase level of 296 U/L, a reticulocyte count of 2.1%, and a positive direct antiglobulin test with anti-immunoglobulin G and anti-C3 antibodies, indicating the presence of both cold agglutinin and warm agglutinin autoimmune hemolytic anemia (AIHA).

Because of the patient’s persistent severe headache, computed tomography (CT) scanning of the head was performed, which revealed small cerebrospinal fluid (CSF) spaces and low-lying cerebellar tonsils. Magnetic resonance imaging (MRI) of the brain with and without contrast similarly demonstrated low-lying tonsils and prominence of CSF within the optic nerve sheaths bilaterally, suggesting the possibility of idiopathic intracranial hypertension (IIH) (Figures 1 and 2). 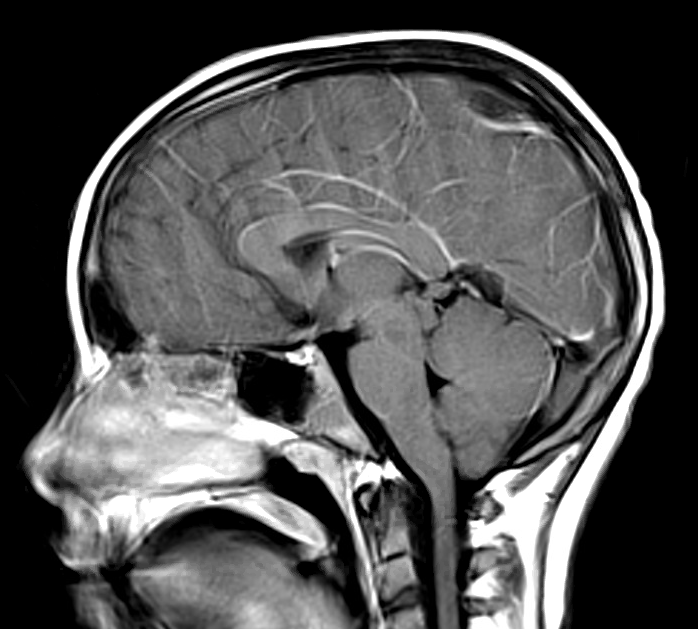 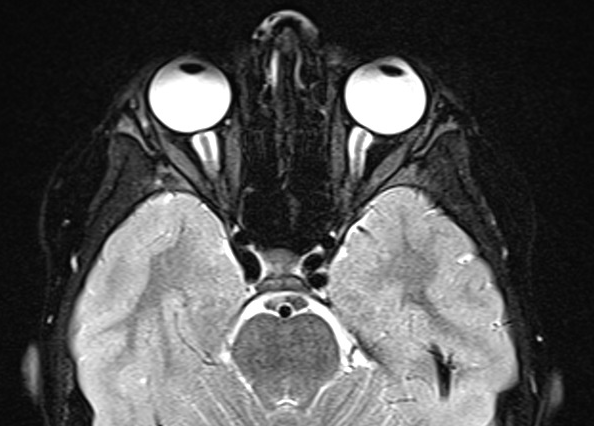 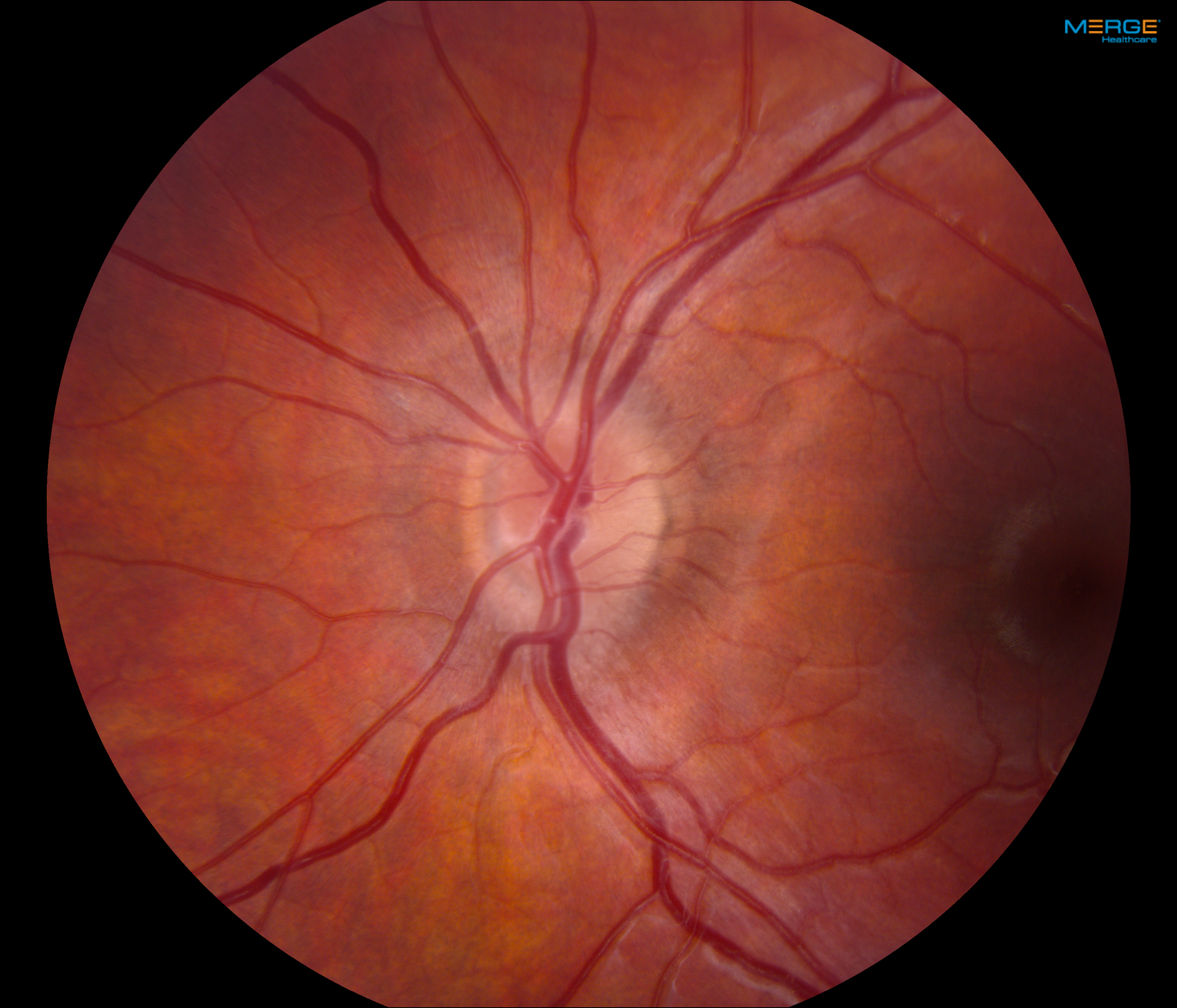 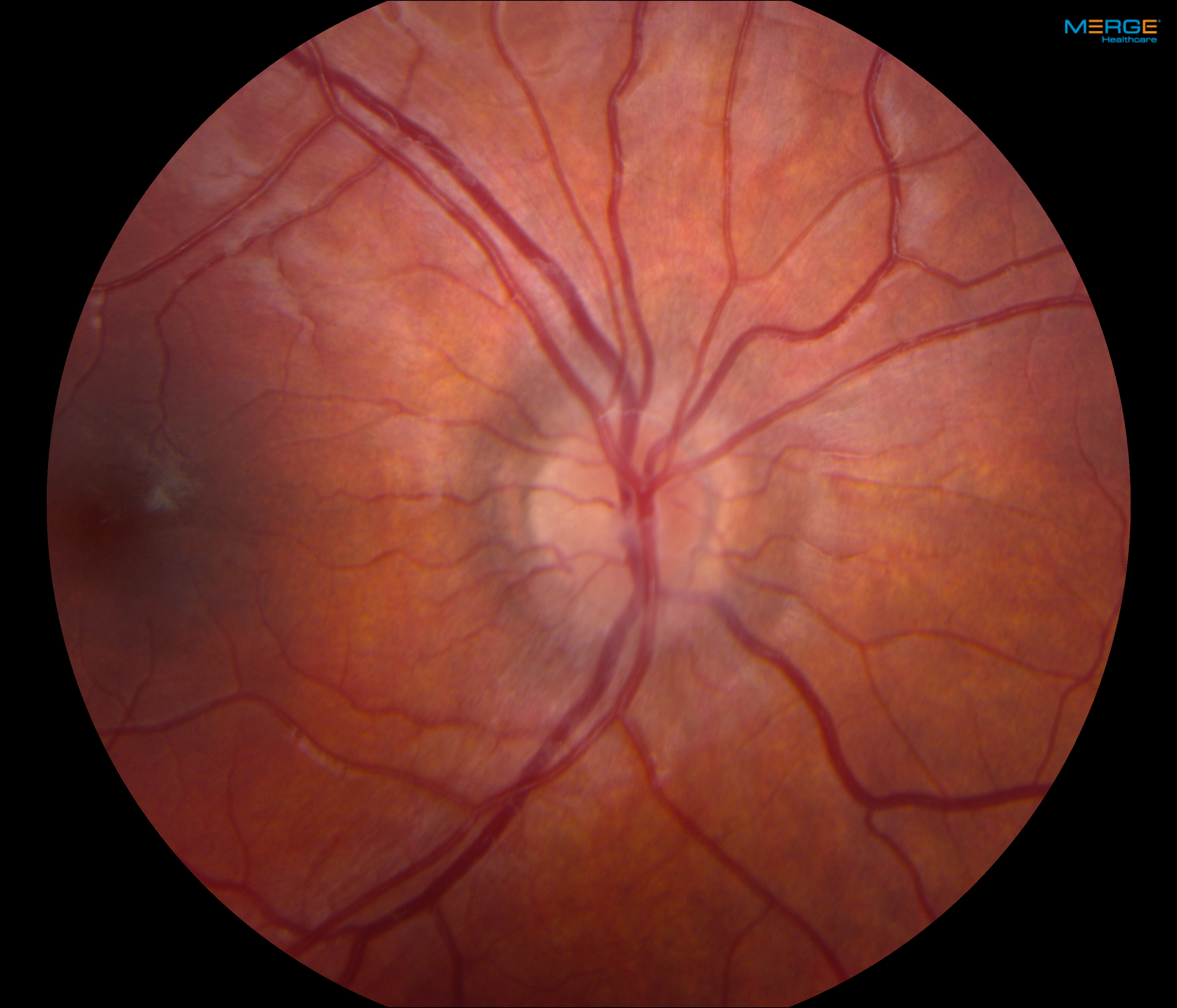 Clinical course. The patient received high-dose corticosteroid therapy with prednisone for AIHA. His optic nerve edema was considered to most likely represent papilledema secondary to his anemia. Therefore, lumbar puncture (LP) was deferred, and no other specific intervention was given for the presumed increased intracranial pressure (ICP). He was discharged on oral prednisone, 40 mg 3 times a day, and close follow-up with hematology and ophthalmology specialists was arranged.

Ten days after the patient’s initial ophthalmology evaluation, examination demonstrated improvement in the appearance of his optic nerves, with elevated optic nerves without definite edema, and with the retinal nerve-fiber layer thickness as measured with OCT of 119 µm in the left eye and 121 µm in the right eye.

Two weeks after his initial presentation, the patient had near complete resolution of his symptoms of headache and fatigue. At that time, his hemoglobin level had improved to 10.6 g/dL. Three weeks after his initial presentation, repeated laboratory evaluation results revealed complete resolution of anemia (hemoglobin, 12.5 g/dL). He was continued on prednisone with a plan for 6-month tapering.

Discussion. This patient’s case demonstrates the association of papilledema and IIH with acute hemolytic anemia in which both resolved following corticosteroid treatment. Although the patient never underwent LP with the measurement of opening pressure, we believe that he had increased ICP based on the presence of optic nerve head edema, recurrent headaches with morning episodes of emesis, and secondary signs of elevated ICP on neuroimaging.1

While increased ICP has many possible causes, it is vital that space-occupying lesions or hydrocephalus be ruled out. In this case, the patient’s CT and MRI scans did not reveal any acute intracranial process. While initial concern existed for a demyelinating disorder given the patient’s history of autoimmune disease and his family history of MS, initial imaging results ruled this out. IIH is frequently in the differential diagnosis of papilledema; however, IIH is fairly rare in pediatric patients. Classically, patients with IIH are women of childbearing age and are overweight. An elevated LP opening pressure with normal CSF contents are essential components to satisfy the modified Dandy criteria to make the diagnosis of IIH.2,3 However, LP was not performed in our patient’s case, since he lacked vision-related symptoms, his optic nerve edema was very mild, and it was presumed that the increased ICP was the result of a secondary process (ie, his anemic state).

Our patient’s initial presentation of anemia and hyperbilirubinemia suggested a hemolytic process. With a reported personal history of psoriasis, AIHA was suspected. Laboratory evaluation revealed a mixed warm and cold AIHA, a rare combination in children. AIHA can either be a primary phenomenon or secondary to a systemic illness, most commonly systemic lupus erythematosus. As with our patient, most children with warm AIHA rapidly respond to glucocorticoid therapy, with a response rate as high as 80%.4

The relationship between anemia and increased ICP has been described for decades.5-8 Yet few recent case reports have demonstrated this association and resolution of ICP with treatment of anemia.9,10 One retrospective case study11 reported 6 cases with papilledema and anemia, highlighting the association between papilledema and iron deficiency anemia in adults. In each of these 6 cases, the authors report complete resolution of vision-related symptoms and papilledema with correction of the underlying anemia with red blood cell transfusion or iron supplementation.11 Another case report described an 8-year-old girl presenting with headache and vomiting who was found to have mixed autoimmune hemolytic anemia triggered by infection with parvovirus B19.12 She was found to have bilateral optic disc swelling, and LP demonstrated an opening pressure of 25 cm H2O. She was treated with a bolus of intravenous immunoglobulin and oral prednisone. Three weeks after her initial presentation, she had complete resolution of anemia and signs of increased ICP.12

The mechanism behind this association of anemia and increased ICP is unknown. It has been hypothesized that iron deficiency anemia induces a hypercoagulable state with increased viscosity, which may contribute to venous and arterial thrombosis. Other theories suggest that the compensatory cerebral vasodilation that may occur in response to cerebral hypoxia during episodes of acute anemia could contribute to the increase in ICP.12