A 12-year-old boy presented with abdominal pain, which he had been experiencing for the past 3 days. When asked to localize the pain with 1 finger, he pointed to the left lower quadrant.

He appeared distressed, and his mother reported concern given the fact that the patient’s 2 older siblings had both required appendectomies due to acute appendicitis in the past. The patient reported some nausea and anorexia. He also reported that he does not typically experience daily bowel movements, having 1 bowel movement every 5 days. The patient denied fever, emesis, diarrhea, melena, hematochezia, and testicular pain or swelling. He reported no known allergies or use of any medications.

Bowel sounds were normal to auscultation, and no masses were visualized or palpated. His abdomen was tender, with guarding and rigidity on light palpation. Although there was no tenderness to palpation directly at the McBurney point, the Rovsing sign was positive and rebound tenderness was present. The psoas sign was negative. The patient was reluctant to jump when asked. He was referred immediately to the emergency department (ED) for further imaging and evaluation.

Diagnostic tests. Laboratory test results were unremarkable, including the C-reactive protein level and white blood cell count. Flat and upright abdominal radiographs were ordered in the ED, with no evidence of obstruction or intraperitoneal air identified. Some small calcifications were identified over the cecum, with appendicolith not being ruled out. Ultrasonography was performed, revealing a 9-mm appendicolith at the tip as the cause of a mild tip appendicitis (Figure 1). Contrast-enhanced computed tomography (CT) was then performed, confirming an early tip appendicitis in a retrocecal appendix. 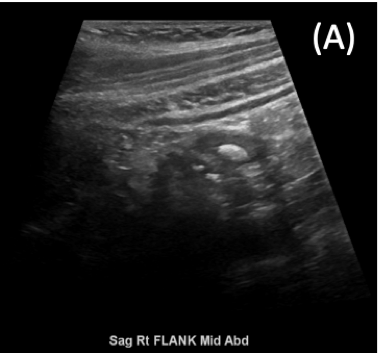 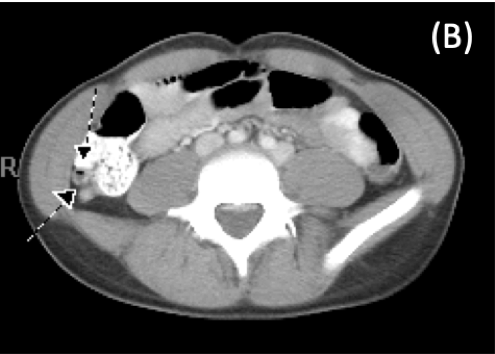 Discussion. Appendicitis is an inflammatory process that most commonly occurs during the second or third decade of life. A higher prevalence exists in males, with a male to female ratio of 1.4 to 1.1,2 The process of appendicitis includes inflammation of the appendiceal wall, which can lead to ischemia, perforation, and potentially abscess or peritonitis.3

The suggested primary cause of appendicitis is obstruction via findings such as fecaliths, calculi, or other pathology such as malignant tumor.4 Increased intraluminal pressure as a result of an obstructed appendix can lead to thrombosis and occlusion and ultimately engorgement and/or perforation of the organ.3 In the pediatric population, fecalith is greatly associated with appendiceal perforation.5

Patients with appendicitis most commonly present with a history of right lower abdominal pain, nausea, vomiting, and subsequent anorexia. Early disease process may present with periumbilical pain, which then migrates to the lower right quadrant. Because a retrocecal appendix sits away from the anterior peritoneum, the patient may not present with right lower quadrant tenderness.1,2 Other physical examination findings include McBurney point tenderness, guarding with deep palpation, indirect tenderness elicited with the Rovsing sign, and/or rebound tenderness.2 About 80% of patients with acute appendicitis present with leukocytosis with left shift.6 Ultrasonography is recommended in pediatric patients with atypical or equivocal findings. If ultrasonography is not diagnostic, and the case is time-sensitive, CT is then recommended.7

Once appendicitis has been diagnosed, it is important to determine whether the appendix is intact, abscessed, or perforated. Pediatric standard of care involves fluid resuscitation depending on the patient’s level of dehydration, correcting any potential electrolyte imbalances. Treatment also includes intravenous prophylactic broad-spectrum antibiotics and pain relief.8 Nonoperative management of appendicitis may be considered on a case-by-case basis in children with uncomplicated appendicitis. However, operative management is considered the treatment of choice with advance appendicitis due to the potential for perforation or gangrene development.9

Outcome of the case. After a diagnosis of acute appendicitis with localized peritonitis was made, piperacillin-tazobactam was administered, and the boy was admitted to the inpatient service. An appendectomy was performed, during which a 9.3-cm long by 0.9-cm diameter appendix containing a fecalith measuring 0.6 × 0.3 cm was removed. The pathology report noted mild acute inflammation limited to the mucosa with prominent lymphoid tissue and a fecalith. The patient was discharged home with amoxicillin-clavulanate, 400 mg, and instructions to follow up with a pediatrician in 3 days for a wound recheck.