A 15-year-old girl with no significant medical history presented to a local community hospital with a 1-day history of altered mental status. She initially had had a fever (temperature to 38°C) with cough and rhinorrhea. Two days later, she became anxious, fidgety, and clumsier than usual. Her parents became concerned when the girl began to have “strange and vivid dreams,” such as believing she had won the lottery.

At the initial hospital evaluation, lumbar puncture (LP) was performed, and results of cerebrospinal fluid (CSF) analysis showed an elevated white blood cell (WBC) count of 14/µL, an elevated red blood cell count of 162/µL, a glucose level of 44 mg/dL, and an elevated protein level of 59.9 mg/dL. She was admitted and started on parenteral acyclovir and ceftriaxone for presumed meningitis. Her clinical status continued to worsen, and over the next few days, she developed echolalia, diaphoresis, tachycardia, and unexplained urinary retention. She began having episodes of focal arm-shaking, concerning for seizure activity. She was transferred to a tertiary-care children’s hospital on day 7 of hospitalization for further evaluation.

Upon admission after transfer, she was afebrile, with a notable heart rate of 110 beats/min and blood pressure of 138/76 mm Hg. Physical examination findings were remarkable for suprapubic distention. Neurologic examination demonstrated a girl who was awake but not oriented to time, date, or location. She was able to recognize and name “Mama” at bedside and had notable echolalia. Cranial nerves II through XII appeared to be grossly intact; she had normal strength, withdrew to stimuli in her 4 extremities, and had 2+ patellar reflexes without clonus. Her gait was unable to be assessed.

Her initial presentation was concerning for infectious, acute psychotic, autoimmune, toxin-mediated, and neoplastic etiologies. Given her worsening clinical course and poor response to antimicrobial therapy, the possibility of autoimmune and paraneoplastic etiologies became more likely. LP was repeated on day 10 of hospitalization, the results of which showed an elevated WBC count of 110/µL, 92% lymphocytes, and 8% monocytes. A CSF meningitis/encephalitis panel for the molecular detection of 14 common bacterial, viral, and fungal targets was sent, along with a CSF anti–N-methyl-d-aspartate (NMDA) study. CSF and blood cultures continued to be negative, and antibiotics were discontinued.

Magnetic resonance imaging scans of the brain were obtained on day 10 of hospitalization. The results demonstrated mild smooth dural enhancement after LP, without evidence of acute infarct, hemorrhage, mass, or hydrocephalus (Figure 1). 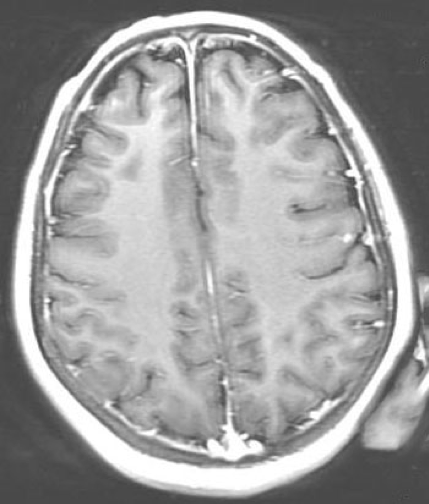 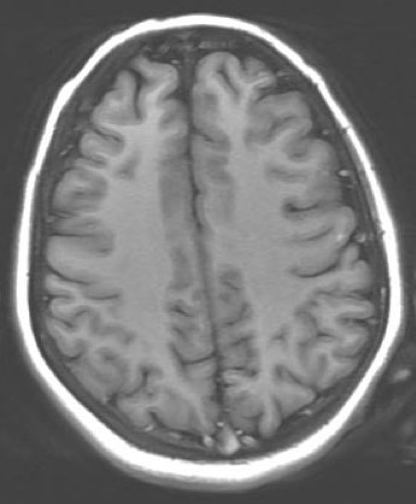 On day 11, she was started on 5-day pulse of intravenous methylprednisolone sodium succinate, and on day 16, she started a 5-day course of intravenous immune globulin (IVIG) for presumed anti-NMDA receptor encephalitis.

By day 21, her mental status had improved significantly; she opened her eyes and attempted to open her mouth on command. On day 23, CSF anti-NMDA receptor antibody test results returned positive, confirming the suspected diagnosis of anti-NMDA receptor encephalitis. The patient was started on plasma exchange on day 23 and rituximab infusion on day 25. Her clinical course improved rapidly. She began to walk with physical therapy and answer questions by day 28. Overall, she received 6 cycles of plasma exchange and 1 infusion of rituximab. A second dose of rituximab was canceled due to rapid her rapid clinical improvement.

She was transferred to an inpatient pediatric rehabilitation program on hospital day 36, with an emphasis on physical, occupational, and speech therapies. At discharge on day 40, she was independent in activities of daily living with minimal residual cognitive and motor deficits.

Extreme delta brush is a novel electroencephalography (EEG) pattern characterized by rhythmic continued delta activity that has been recently appreciated in adults with anti-NMDA receptor encephalitis.1,2 It is not, however, a finding commonly reported in children. During her hospital course, the patient had 4 EEGs. The first 3 EEGs were performed on days 1, 7, and 9 of hospitalization, and the findings of each were abnormal and nonspecific. The EEG report noted “an abnormal awake EEG due to the presence of a diffusely slow background, lacking typical organization, and with no clear seizures, but with epileptiform spikes.” The 4th EEG, obtained on day 15 of hospitalization, according to the report, showed “diffuse slowing … present at times, with bursts of higher-amplitude slowing and intermixed sharps, indicating a diffuse encephalopathy. Bursts of high-amplitude slowing with overriding fast activity reminiscent [of] delta brushes are also present, consistent with an encephalopathy” (Figure 2). 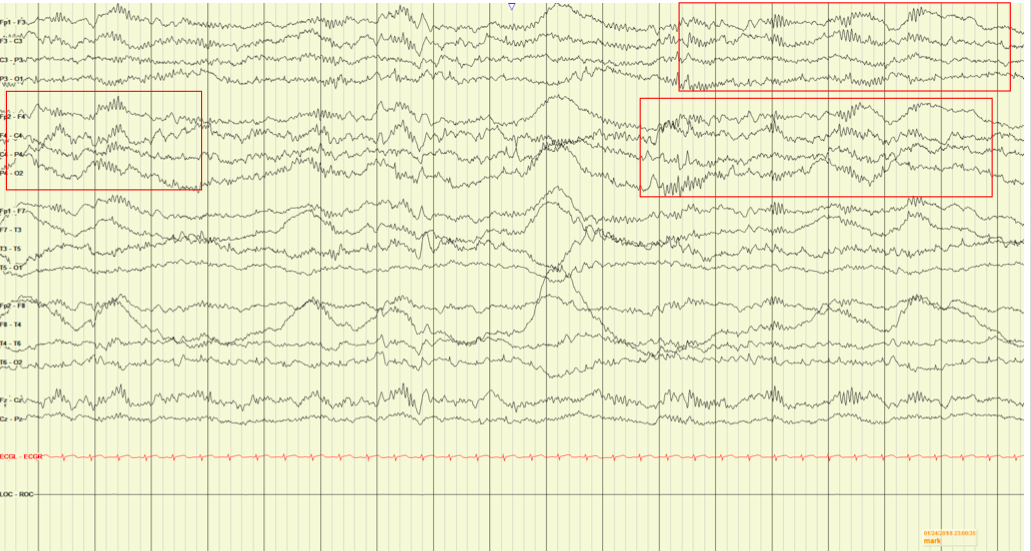 Discussion. Anti-NMDA receptor encephalitis is an autoimmune disorder in which autoantibodies attack N-methyl-d-aspartate receptors in the brain, resulting in distinctive features such as confusion, autonomic instability, and seizures.2,3 Women are more often affected than men, and approximately 50% of cases are associated with tumors, most commonly ovarian teratomas.4

Although the occurrence rate of anti-NMDA receptor encephalitis is low, it is a challenging clinical diagnosis. The differential diagnosis is wide and includes infectious, acute psychotic, autoimmune, toxin-mediated, and neoplastic etiologies. The gold standard for diagnosis is CSF antibody detection, but a unique EEG finding of extreme delta brush has been associated with anti-NMDA receptor encephalitis in adult patients.2 The finding has not been commonly reported in the pediatric population, however, and our patient had the finding early in her hospital course.

Even after the diagnosis of anti-NMDA receptor encephalitis has been made, management can vary, given that no current comprehensive guidelines exist. IVIG and IV pulse corticosteroids are first-line treatment modalities, given their lower degree of associated immunosuppression.5,6 Glucocorticoids alter DNA transcription, induce T-cell apoptosis, and ultimately decrease the inflammatory response caused by T cells.7 IVIG has multiple immunosuppressive mechanisms, but at high doses, it upregulates regulatory T cells that inhibit proinflammatory pathways.7 Ultimately, the primary goal of these 2 agents is to decrease the inflammatory response caused by T cells.

Second-line treatments include plasma exchange (PLEX) and rituximab, which have a comparatively increased degree of immunosuppression.6 PLEX is an extracorporeal blood purification technique that removes substances or cells from plasma and can remove pathogenic autoantibodies that cause damage.8,9 This is particularly important for removing destructive autoantibodies such as immunoglobulin G, which can have a 21-day half-life in plasma.10 Rituximab is an anti-CD20 chimeric monoclonal antibody that causes B-cell depletion.11,12 This agent induces B-cell apoptosis and ultimately halts production of pathogenic autoantibodies. Infection must be effectively ruled out, given the increased risk of opportunistic infections and viral reactivation.13

PLEX and rituximab have been used as treatments for Guillain-Barré syndrome, myasthenia gravis, and other pathogenic autoantibody-driven disease processes.14 Given the promising results, a number of groups have explored these treatments individually for anti-NMDA receptor encephalitis.8,12

Our patient had minimal response to IVIG and pulse-dosed corticosteroids but demonstrated rapid response (return of gait and speech) when treated with PLEX followed by rituximab. It is likely that the combination of removing pathogenic autoantibodies via PLEX and the suppression of new destructive autoantibodies via rituximab had optimum effect. Given the dramatic response observed with PLEX and rituximab, early initiation of traditionally considered second-line therapies should be explored once infection has been ruled out.

Further studies are needed to elucidate optimum treatment regimens for anti-NMDA encephalitis. Early recognition plays a key role in influencing patient outcome. Extreme delta brush patterns on EEG may be helpful in establishing the diagnosis of anti-NMDA receptor encephalitis, even in pediatric patients.

ACKNOWLEDGMENT:
We thank Deborah Holder, MD, in the Division of Neurology at Children’s Hospital Los Angeles for EEG capture and interpretation.