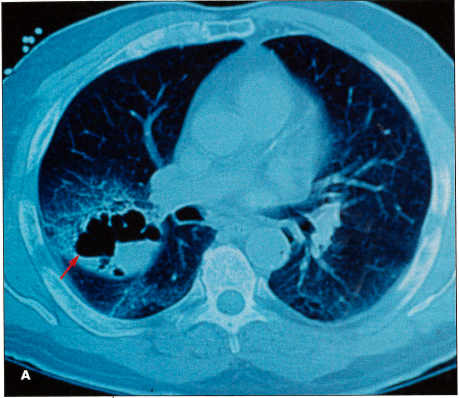 A 60-year-old woman with a 3-month history of cough, chest pain, and shortness of breath was brought to the emergency department. The patient denied any history of fever, chills, or rigors; she complained of mild hemoptysis for 1 week and a 9-kg (20-lb) weight loss during the last few months. The patient had smoked cigarettes for 40 years.

A chest film and a CT scan (A, arrow) showed a right upper lobe cavitary lesion. A bronchoscopy with biopsy of the lesion and a transbronchial needle aspiration confirmed a squamous cell carcinoma of the right upper lobe of the lung. Further workup demonstrated metastatic disease in the adrenal glands and the bones. The patient initially responded to combined radiotherapy and chemotherapy. She died of metastatic disease 9 months later. 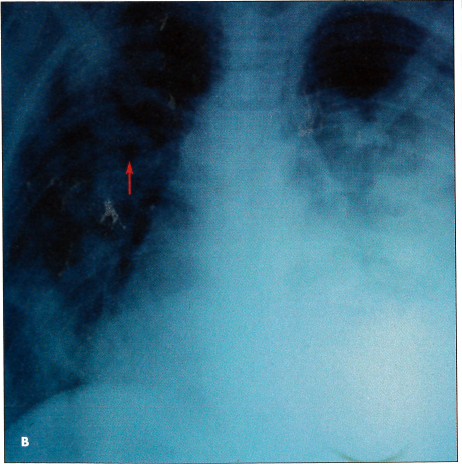 M. Duggal, MD, N. Shah, MD, and Arunabh, MD, of Forest Hills, NY, write that approximately 16% of all peripheral primary carcinomas show evidence of cavitations, which most frequently occur in squamous cell carcinomas.1 Cavitations are also common in bronchoalveolar carcinoma, which is a very well-differentiated adenocarcinoma. Metastatic lesions in the lung also may have cavitations; however, in contrast to primary lung cancers, which are usually solitary, multiple lesions are present in most patients with metastatic disease. Cavitating metastases most frequently occur from head, neck, and esophageal tumors and uterine carcinomas. Cavitations often signal underlying central necrosis. 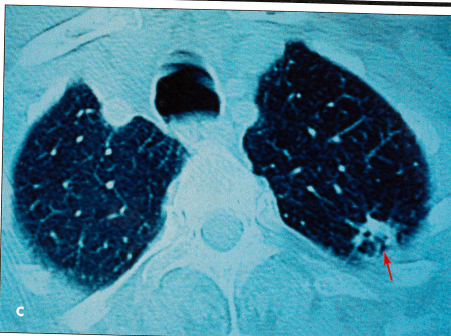 Many conditions can present with cavitations and need to be considered in the differential diagnosis of cavitary lung lesions. Generally, infection is the most common cause; Staphylococcus, Klebsiella, Pseudomonas, and anaerobic organisms frequently cause pneumonia with cavitations (B, arrow). In addition, chronic granulomatous infections, including tuberculosis (C, arrow), histoplasmosis, blastomycosis, and coccidioidomycosis, may result in multiple or solitary cavitary lesions.

Lung abscesses develop from pyogenic infections, particularly those caused by aspiration of oral anaerobes that ultimately produce putrid sputum, tissue necrosis, and pulmonary cavities (D, arrows). The course of a lung abscess is usually subacute; most patients present with a history of fever, chills, cough, rigors, and weight loss. Collagen vascular lesions associated with Wegener granulomatosis and rheumatoid arthritis can lead to lung nodules that may cavitate. 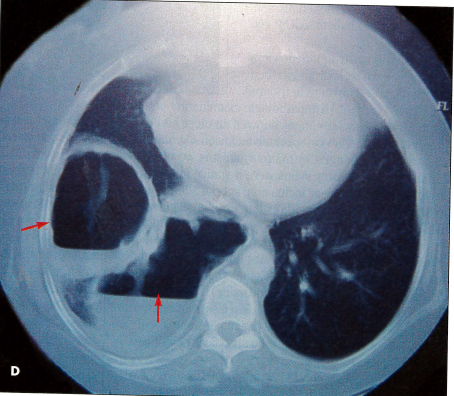