One hour after sustaining a puncture wound to the left ankle, a 2-year-old boy was brought the emergency department. The father, a commercial fisherman, was attempting to free a catfish from a crab trap when it fell and its dorsal spine punctured the child’s ankle (Figure). The boy had immediate pain, erythema, and edema. After several unsuccessful attempts at removal, the father cut the spine 1 cm above the skin with a pair of pliers. 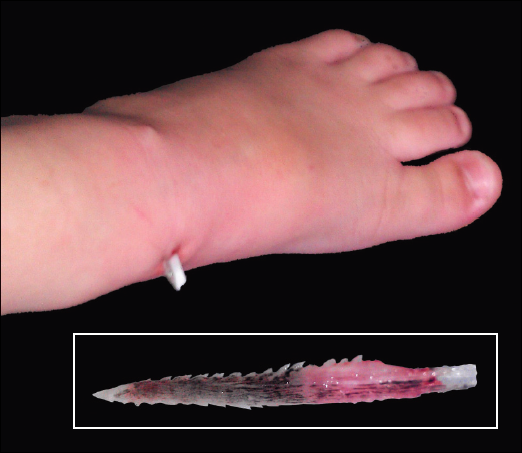 The child was sedated. The catfish spine was removed intact in an anterograde fashion through a small incision in the overlying skin. The wound was irrigated copiously with normal saline and left to heal by secondary intention. The patient tolerated the procedure well and was discharged with oral clindamycin. The wound healed without any complications.

Although the incidence is not well documented, there are numerous case reports of catfish envenomation among freshwater and saltwater anglers.1-10 Many of the 1000 species of catfish worldwide secrete a proteinaceous toxin from specialized epidermal cells or inflict venomous stings with their dorsal and pectoral fins.1,2 The fins end distally as sharp, serrated cartilaginous spines and contain microscopic venom glands along the lateral edges.2,3 When a catfish is threatened, the fins become fully erect, which contributes to their propensity for causing puncture wounds.1,7,8

Children and adults with catfish stings have immediate weakness, pain, and throbbing at the site of injury.2,5,6 Radiation to the proximal extremity is common.3,6 The venom causes a severe local inflammatory reaction with erythema, edema, hemorrhage, and tissue necrosis.2-5 The severity of symptoms is highly variable and depends on the species of catfish as well as the amount of envenomation.1-4 Symptoms are usually self-limited. Most serious complications arise from secondary bacterial infection.2-4,7 Common organisms include Vibrio, Aeromonas, Enterobacteriaceae, Pseudomonas, Erysipelothrix, Chromobacterium, Nocardia, Actinomyces, Mycobacterium, and normal skin flora.2,7

Management begins with aggressive pain control. This involves a long-acting local anesthetic without epinephrine.1-5 The affected extremity is immersed in water as hot as can be tolerated (up to 45oC) for 30 minutes to denature the heat-labile toxin.1-4,11 Careful exploration, debridement, and irrigation of the wound is important because retained spines may be radiolucent.2 Tetanus prophylaxis should be administered when indicated.4 Culture of the wound is highly recommended. Although controversial, empiric antibiotic prophylaxis is frequently administered.2,3,7 Patients require close follow-up to monitor for signs of infection or retained foreign body.