A 34-year-old man presented to the emergency department with a nonproductive cough and progressive dyspnea on exertion over the course of a week. His symptoms had progressed to the point that he was unable to climb a set of stairs or walk a short distance without becoming significantly out of breath.

History. The patient was a landscaper and seasonal snow remover with no pertinent medical history. Upon questioning, he noted that a week prior, he had a binge console-gaming session with his children, during which he had sat on the floor with his legs crossed for 6 to 8 hours straight without getting up. He had no history of recent surgical procedures, travel, or hospitalizations; no prior thromboembolic disease; no known malignancies; and no recent trauma or immobilization. He denied chest pain, palpitations, diaphoresis, and leg pain or swelling.

Physical examination. At presentation, he was noted to be tachycardic at 114 beats/min, with a blood pressure of 152/59 mm Hg, a respiratory rate of 18 breaths/min, an oral temperature of 36.8°C, and an oxygen saturation of 95% on room air. Cardiac examination demonstrated tachycardia with a grade 1/6 systolic murmur on the left sternal border. He demonstrated mildly labored breathing, but the lungs were clear to auscultation bilaterally, with no lower extremity edema.

Doppler ultrasonography of the bilateral lower extremities showed an occlusive thrombus in the left distal femoral vein, extending into the popliteal, peroneal, and posterior tibial veins (Figure 2). He also had a mildly elevated troponin level of 0.9 ng/mL, likely from acute cor pulmonale, and his D-dimer level was elevated at 15.98 µg/mL. 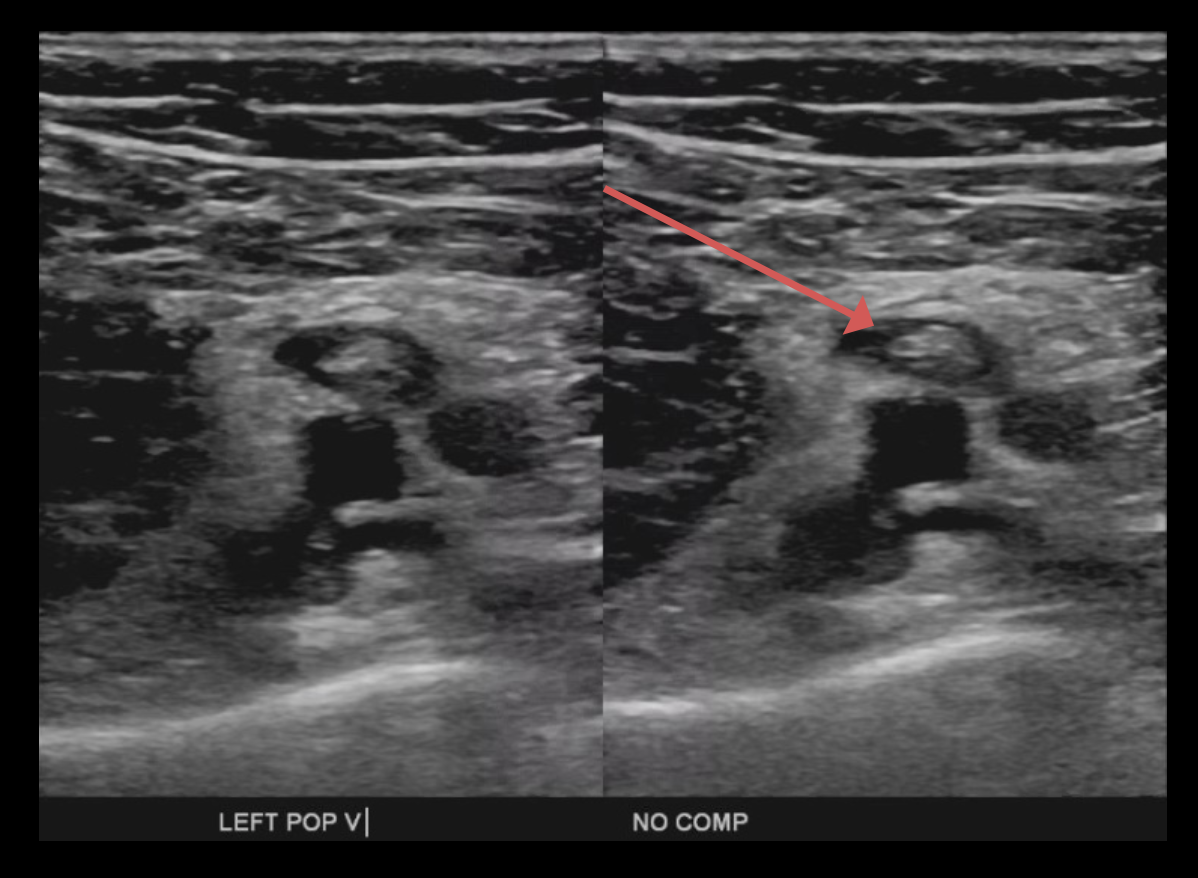 Discussion. One of the first cases of venous thromboembolism (VTE) associated with prolonged sitting in front of computer was reported in 2003. Beasley and colleagues coined the term eThrombosis in their description of a 32-year-old man with no other risk factors who developed a PE after working for 18 hours on his computer.1 Beasley also observed a similar phenomenon in the case of a 53-year-old woman who had watched a movie that was longer than 3 hours and subsequently developed a right lower-extremity deep-vein thrombosis (DVT).2

The term eThrombosis matured into seat immobility thromboembolism (SIT) syndrome,2 which was further characterized in a retrospective chart review using the following inclusion criteria: a discharge diagnosis of DVT or PE, age less than 40 years, a history of seated immobility for at least 8 hours, and no other recognized risk factors. Five patients met the inclusion criteria, and they all had one thing in common: prolonged sitting at work computers or home computers, usually in the range of 8 to 15 hours.3

Other activities with prolonged seating have also been connected with the development of DVTs and PEs. A case has been described recently of a 56-year-old woman who developed a right lower-extremity DVT and multiple PEs after spending approximately 8 continuous hours watching a national political convention on TV for 2 consecutive days.4

Prolonged sitting while playing video games has also been shown to be linked with DVTs and PEs. Chang and colleagues described the case of a 31-year-old man who had four 8-hour days of binge gaming and developed extensive PEs and DVTs, which the authors referred to as “gamer’s thrombosis.”5 In a systematic review using the keywords thrombosis, artery, vascular, eThrombosis, video game, Wii, Nintendo, Wiitis, and computer game, Girgis and colleagues found 9 cases of VTE secondary to prolonged gaming.6 Most of these cases demonstrated prolonged immobility as the only risk factor. The average age of the cohort was 25 years, and the average time spent gaming was 15 hours.6

The typical patients described in these case studies were younger than 40 years and were otherwise healthy with no traditional risk factors. Furthermore, they were immobile, either from gaming, working at a computer, or watching TV, for at least 8 hours. Our patient’s vascular event illustrates this emerging pattern. Unique to his case is the description of crossed legs while gaming. In addition to prolonged immobility, leg positioning may have contributed to the development of VTE. More research needs to be done to determine whether leg positioning should be considered an additional risk factor.