Can You Identify These Masqueraders? 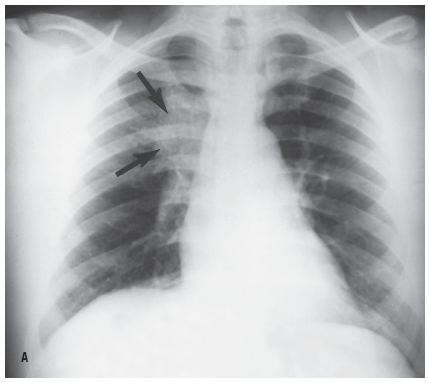 Radiologic evidence of a response to antibiotic therapy was absent in a 48-year-old man with “pneumonitis.” He had a productive cough with blood-streaked sputum, fever, fatigue, night sweats, and recent weight loss. The patient, a physician assistant, worked in a hospital and had recently been exposed to active tuberculosis; he had been a heavy smoker but had stopped smoking 20 years earlier. A chest radiograph (A) showed a paratracheal infiltrate (black arrows) in the right upper lobe that had increased in density in the 10 days since the previous radiograph (B) was obtained.

A number of studies were done, including a purified protein derivative test, the results of which were negative. Bronchoscopic examination did not reveal carcinoma, although a CT scan of the chest showed a suspicious 5-mm mass in the right upper lobe. Sputum smears were all negative for acid-fast bacilli, as were subsequent culture reports. 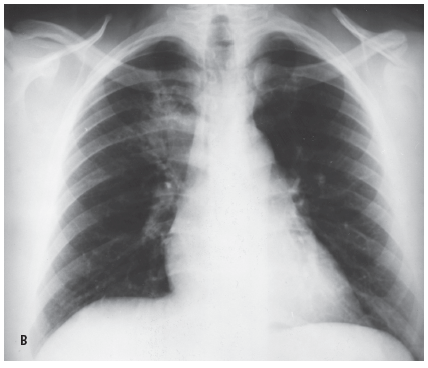 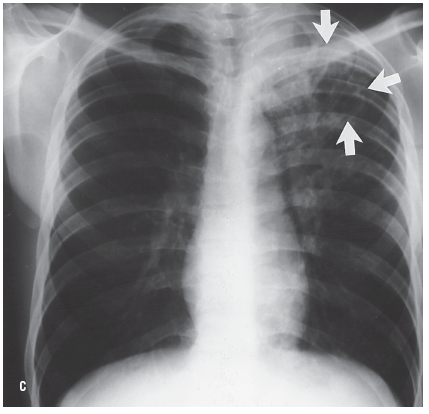 Sputum cultures for fungi were positive for Blastomyces dermatitidis; the patient had blastomycosis masquerading as carcinoma. North American blastomycosis is contracted by inhalation of the fungus. It usually involves the lungs, but hematogenous dissemination can spread it to the skin, skeletal system, urogenital system, and (occasionally) oral and nasal mucosa. Although the source of infection is in nature, specific sites have not been established (as they have been, for example, in the case of histoplasmosis). In the United States, most reported cases are in the Ohio and Mississippi valley regions.

Blastomycosis can also masquerade as tuberculosis, as in the case of a 28-year-old man who had recently quit smoking and presented with a history of productive cough, mild hemoptysis, fatigue, fever, night sweats, and weight loss. A chest radiograph (C) showed disease process predominantly in the left upper lobe (white arrows) with infiltration as well as cavitation. A small area of infiltration is seen in the right hilar region. The clinical presentation and radiologic findings were consistent with tuberculosis. The patient failed to show clinical improvement with antibiotics, and a trial of antituberculous drug was started while results of sputum cultures were awaited. Twenty-six days after the patient’s initial visit, his chest radiograph (D) showed deterioration in both lungs. Sputum culture results were negative for Mycobacterium tuberculosis but positive for B dermatitidis. The patient was treated with ketoconazole; 2 months later, there was radiologic evidence of marked improvement.

Because blastomycosis can mimic tuberculosis, carcinoma, additional fungal diseases, and other chronic pulmonary diseases, there is a need for heightened awareness of deep-seated mycotic infection. 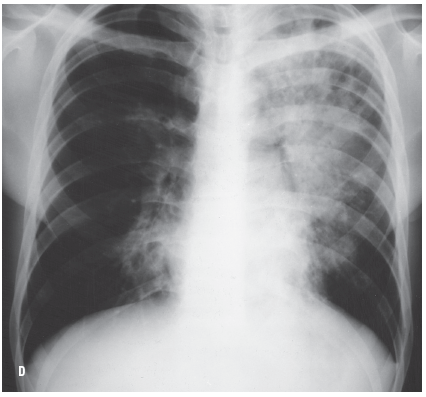 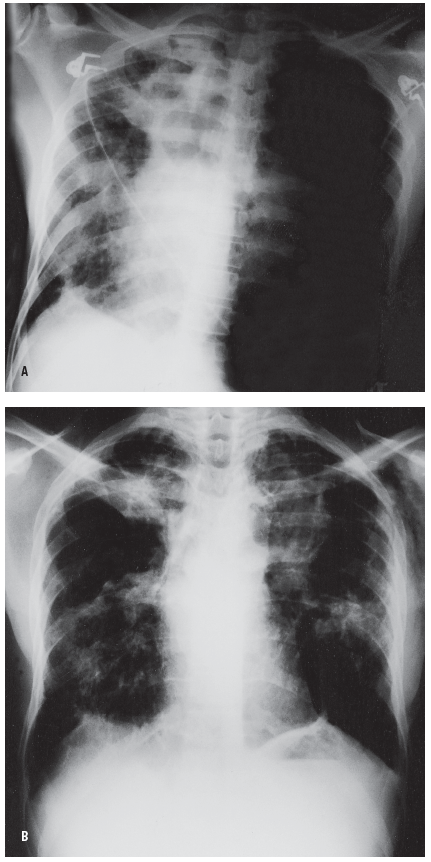 Left pleuritic pain and severe dyspnea while climbing stairs were the presenting symptoms of this 42-year-old man. He had a 2-year history of exertional dyspnea but had not sought medical advice. The patient’s heart rate was 123 beats per minute; respiration rate, 45 breaths per minute; blood pressure, 80/45 mm Hg; and temperature, 37.3°C (99.1°F). Chest examination revealed hyperresonance with absence of breath sounds over the left hemithorax and wheezing over the right lung.

A chest radiograph (A) showed left-sided tension pneumothorax with a collapsed left lung, and a shift of the trachea and mediastinum to the right. Left-sided tube thoracotomy was carried out, and the patient was placed on mechanical ventilation. The air leakage sealed after 4 days; ventilatory support was then discontinued, and the chest tube was removed.

What does the follow-up chest radiograph (B) tell you about the patient’s condition?

The chest radiograph reveals diffuse pulmonary parenchymal disease. Bronchoscopy was performed to determine the underlying pathologic process. No endobronchial lesions were seen. Transbronchial biopsy showed noncaseating epithelioid granulomas, which led to the diagnosis of sarcoidosis. All cultures were negative for pathogenic organisms. The patient was treated with corticosteroid therapy, which resulted in clinical improvement, and he had no recurrent episodes of pneumothorax during the following year.

The association between pneumothorax and sarcoidosis was first described by Freiman in 1948. Development of pneumothoraces in these cases is believed to be caused by rupture of a subpleural granuloma, resulting in a bronchopleural fistula. Pneumothorax may be the presenting manifestation of pulmonary sarcoidosis.1