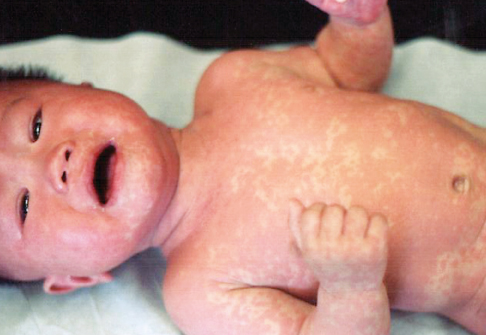 A 10-month-old girl had a fever (temperature, 38.5°C [101°F] to 40°C [105°F]) for 3 days. She was treated with acetaminophen and had not been given any other medication. On the fourth day, the fever subsided and a rash appeared. The baby had begun attending day care 2 months earlier. There was no associated cough, vomiting, or diarrhea.

Afebrile infant with rosy pink macules and patches on the trunk and face. The rash blanched on pressure. All other physical examination findings normal.

Roseola infantum, also known as exanthem subitum or sixth disease, is a common childhood disease characterized by high fever that lasts 3 to 4 days followed by the sudden appearance of a rash at defervescence.1,2

Infants and children between 6 months and 2 years of age are most frequently affected. Presumably, maternal antibodies protect most infants from infection during the first few months of life.3 By 12 and 18 months of age, approximately 65% and 95% of children, respectively, have become infected.3 Roseola infantum is rare
after age 4 years.4 The sex ratio is equal. The condition occurs throughout the year.5

Human herpesvirus 6 (HHV-6) is the major cause of roseola infantum, the other cause being HHV-7.4,6 Both are enveloped, double-stranded DNA viruses with an icosahedral capsid.7 They are members of the Roseolovirus genus of the Betaherpesvirinae subfamily.8

Transmission of the infection most likely results from asymptomatic shedding of the virus in the saliva of caregivers or other close contacts.5 The main route of transmission, by inoculation of the oropharynx, leads to replication of the virus in salivary glands.9 From the salivary glands, the virus gains access to T lymphocytes.9 The incubation period of HHV-6 is 5 to 15 days, while the incubation period of HHV-7 is not known.3 HHV-7 infection tends to occur later in life than HHV-6 and may account for second or recurrent cases of roseola infantum.6 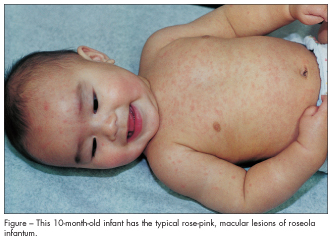 The prodromal period of roseola infantum is usually asymptomatic.5 The infected child generally has fever of abrupt onset, with temperatures in the range of 39°C (102°F) to 40.5°C (105°F).1 At defervescence, 3 to 4 days later, a rash suddenly appears—hence the term “exanthem subitum,” meaning sudden rash.2,9 Most children are otherwise well and seem happy, alert, and playful.1,6 However, some children may exhibit restlessness and irritability during times of increased fever.

The typical lesions of roseola infantum are rose-pink, macular, and of 2 to 3 mm in diameter (Figure). The eruption first appears on the trunk. It then spreads to the neck and proximal extremities, and occasionally the face.6 The rash usually blanches on pressure and subsides within 2 to 4 days.2 Characteristically, lesions remain discrete but may become confluent, as in the patient described on page 65.5 Pruritus and desquamation are usually absent.9

The diagnosis is mainly clinical. The differential diagnosis includes, most importantly, drug allergy in a febrile child who is receiving antimicrobial therapy, along with other childhood exanthems:

•Drug allergy rash usually lasts longer than a few days and may be accompanied by pruritus and fever.

•Measles typically presents with cough, coryza, conjunctivitis, Koplik spots, and appearance of rash at the height of the fever.5

•Scarlet fever commonly manifests as sudden onset of sore throat, fever, a beefy red pharynx, enlarged and erythematous tonsils (with or without exudates), enlarged tender anterior cervical lymph nodes, and a rash. The rash typically blanches on pressure, has the texture of gooseflesh, or coarse sandpaper, and is better felt than seen. The rash may be more prominent in flexor skin creases, especially in the antecubital fossae (Pastia lines).

Febrile seizures occur in about 5% to 10% of children with roseola infantum.5 Rarely, meningitis, encephalopathy, thrombocytopenic purpura, hepatitis, inappropriate antidiuretic hormone secretion, and pneumonia may result from HHV-6 or HHV-7 infection.1-3,7,9-11 Most children recover without sequelae.

Roseola infantum is a benign, self-limited disease. There is no specific treatment. An antipyretic may be used to reduce fever and discomfort.